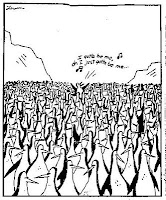 People try to coerce you into prayer. They inflict inane pieties on you and prate about an afterlife. It is, of course, the maximally inappropriate venue to insist on dissent. No individuals are allowed.
Posted by Zeno at 9:00 PM

Actually, I've read that something like 1/3 of American adults refrain from alcohol. Don't know whether that statistic is accurate (although it includes a sizable number who abstain due for religious reasons), but it certainly includes you and me and several other of my friends.

Re "She and her late husband are together again": That's technically true to the extent that they're both dead, and quite likely their (c)remains are in the same place.

Got to talking with spouse tonight re remarks, and came up with a few of our own.

We all remember being elected to our high school Honor Society? Winning a ribbon at the regional science fair? And being chosen to play the concerto solo at music camp?
How about being elected top FFA student in high school all four years (well OK, that one was HIS)?

You can include me in the 87% who partake of alcohol, but I'm definitely not in the majority for watching games, going to high school proms, and praying. But one difference between me and Zeno is that I'M SMART ENOUGH TO KEEP QUIET ABOUT IT!!! Hah, really. Why give more excuses to be pilloried in the public square?

The few times I've gone to a funeral or memorial, I have to fight hard not to bow my head when a minister commands us all to do so. Then I'm stuck looking around the room, wondering what I'm supposed to do when everyone else is staring at their own feet. Of course, there's usually one or even a few people doing exactly the same as I, a small band of infidels among the dutifully pious.

As for sports, I think that's even a tougher game than religion. John Lennon dared to remark that the Beatles were probably more popular among the young than was Jesus Christ. I will second that and speculate that televised sports today engenders far more faith and support among its flocks than do all the religions of the world combined.

But don't get me started!

Gene, if the god-squad were really sneaky, they'd designate a spy at each such event to look around and spot those not bowing their heads, in order to identify targets for future proselytizing. Fortunately, I'm pretty sure they're not smart enough.

Did you ever read Children of Dune, Kathie? Perhaps you remember this:

The human sea emitted a sound like the hiss of a giant sandworm as Jessica emerged. She raised her arms in the benedictory to which the priesthood had conditioned the Imperium. With significant pockets of tardiness, but still like one giant organism, the people sank to their knees.

The "pockets of tardiness" are noted, rounded up, and eliminated. Some are dispatched so promptly that their bodies are left bleeding into the sand before the welcoming crowd even disperses.

Nope, not a fan of sci fi, fantasy, etc.

In the wake of last night's movie theater shooting rampage, the Louisiana governor's public announcement was, "Now is the time for prayer..." I call "bovine effluent" on that!

Remember during the 2008 Presidential campaign when Sarah Palin praised teachers by saying that they would receive their reward "in the next life" -- the most reasonable inference being that she opposed their being rewarded appropriately "in this life"?

A while ago, I went to a friend's son's Catholic wedding a few years ago, where there was not only bowing of heads and closing of eyes but also kneeling. I was surreptitiously glancing around to see who else was declining to participate, and noted that some of these included the uncle of the groom (raised Catholic), and the grandparents of the groom (Jewish, though possibly only culturally). As for my lack of conformity being noticed by the observant, as far as I am concerned, they are supposed to be paying attention to their deity during that time, not looking around to see who the infidels are, so if anyone challenged me as to why I didn't have my head bowed and eyes closed I could confidently say that it was because I am an atheist, then ask them what their excuse was.

(On a much sadder occasion, I recently attended a memorial service (at a funeral chapel) for a 12-year-old who had committed suicide. His parents were estranged; his father (my friend) was an atheist, but his mother was Christian. The officiant did a reasonable job of acknowledging the non-believers in the congregation, making clear that though everyone was invited to join the group prayers, people who did not believe should not feel obligated to participate.)