City College gets an extension

The biggest community college in California will not have to shut its doors this year. All of that work in preparing a schedule of classes for fall 2014 was not in vain. As announced this week, the Accrediting Commission for Community and Junior Colleges is promulgating a rule change that will grant the City College of San Francisco a two-year extension in its efforts to resolve the deficiencies identified in the college's most recent accreditation reviews. The San Francisco Chronicle hailed the news with a front-page headline and a detailed article by Nanette Asimov, who has been closely documenting the years-long story. 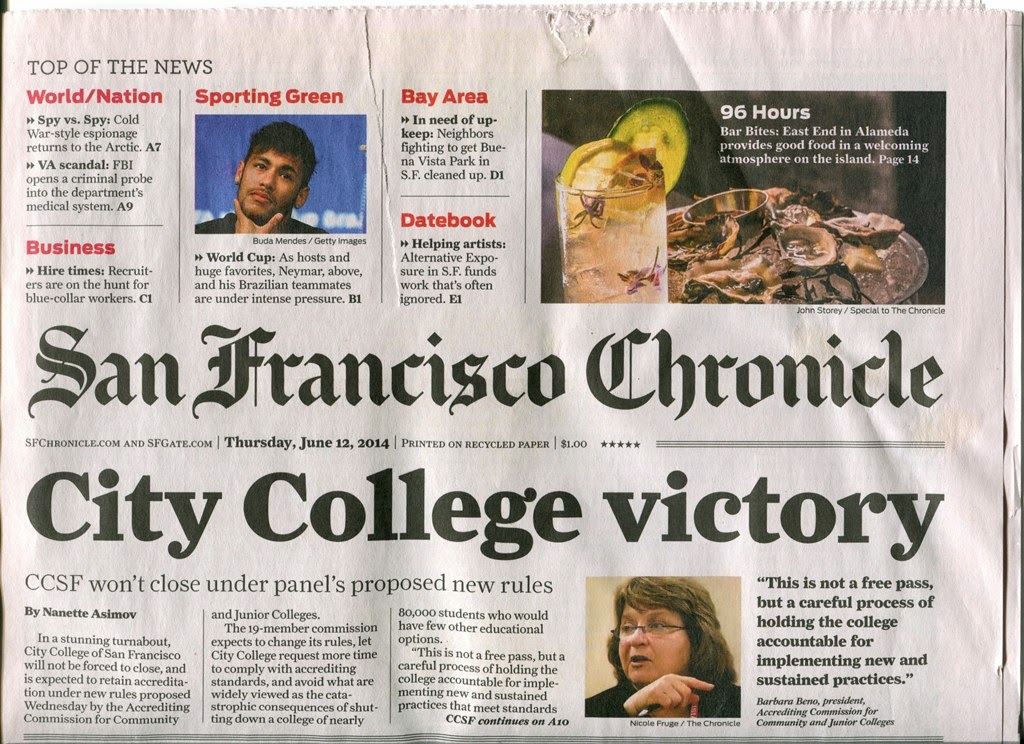 The innocent bystander may be unaware that the arguments in the City College controversy were as much about the deficiencies of the accrediting agency as they were about the college itself. Make no mistake: City College had plenty to answer for. The ACCJC found that City College was deficient in its planning, accounting, and management processes. The institution's teaching mission was threatened by its inability to track its assets, collect student fees, and address developing needs. Furthermore, CCSF had been warned about its shortcomings in a previous accreditation process but had not bothered to correct them. The college was begging to be disciplined.

Unfortunately for everyone, including itself, the ACCJC proceeded to demonstrate its own inability to manage a difficult case. It imposed the death penalty on CCSF and then stubbornly refused to cooperate with the attempts to implement an emergency rescue of the institution. Nothing underscored this more clearly than the ACCJC's insistence it could not grant an extension even after the federal Department of Education released a stated confirming that it could. As Asimov reported


Last month, [commission President Barbara] Beno and commission Chairwoman Sherrill Amador and Vice Chairman Steven Kinsella refused to extend the revocation deadline despite public assurances from Lynn Mahaffie, a senior accrediting director with the Department of Education, that federal regulations permitted doing so. Nevertheless, the full commission, which meets just twice a year, changed its policy during its meeting June 4-6 in Sacramento. The agency is private and details about its internal decision-making aren't known.

Despite the Chronicle headline, “victory” is too sanguine a conclusion. City College has a lot of work to do before it can be considered fully compliant with ACCJC accreditation standards which other community colleges (like my own) are required to meet. At least the reprieve gives it the opportunity to continue the process under the new leadership that took over in the midst of the debacle. I also expect a painstaking internal review by the ACCJC of its punitive practices. At least, I hope so. If the ACCJC fails to do so, it is merely mirroring the failings of the institution over which it sat in judgment. Anyway, the internal review is necessary in terms of self-defense. Rigorous external review will be imposed by California's state legislature and the Department of Education, so the ACCJC had better get ready.

In my generation, SFCC was one of the jewels in California's junior college crown. I knew quite a few of their transfer students who did well at Cal, even some who then went on to earn their Ph.Ds. there in STEM fields. I hope the current mess will prompt both sides to clean up their acts and get back to the business of offering first-rate public educations.