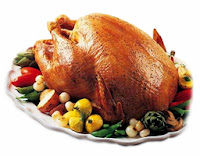 The initial notice came from my mother, who called with information about the family's holiday plans: “Thanksgiving dinner will be at your brother's.”

I felt a sudden frisson of anxious concern. And skepticism.

“He has your permission for this?”

My suspicion was not alleviated. Surely Mom was in denial. Or perhaps she had forgotten the lessons of the past, back when we tried this experiment before. As best as I can recall, it was in the early seventies. Perhaps late sixties. The family had quite overwhelmed the grandparents' dining space. Holiday dinners were served in shifts—menfolk and children at the first sitting, womenfolk and stragglers at the second. (I often managed to prolong my meal through both shifts, occasionally provoking my obese aunt to remark “I hate people like you” as she regarded my scrawny frame.)

In the year in question, someone (I don't know who) hit upon the idea of relocating the family holiday meal to my godmother's home. She had a spacious dining area with ample room for folding tables and an adjacent kitchen counter with stools that the kids loved. My avó (grandmother) was prevailed upon to give her assent and the new world order was implemented.

As I recall, my grandmother did a minimal amount of cooking that year and all the main dishes were prepared by my godmother, Mom, and aunt. Avó was enthroned as guest of honor and scarcely allowed to lift a finger. She presided over the adult table in a regal manner instead of bustling to and fro between kitchen and dining room. She seemed serene.

That's why it came as a shock and surprise when she burst into tears upon returning home and wept the afternoon away. There was no holiday mess in her home and no lingering cooking odors in the air. Avó sat in a home bereft of any trace that it had been a special family holiday and it sucked all the joy of the occasion out of her.

We never made that mistake again. For the rest of my grandmother's life, every subsequent Thanksgiving was squeezed into her home. While others gradually took over more and more of the cooking, Avó was unambiguously in charge of the event and no one trifled with the matriarch's prerogatives as queen of the kitchen and hostess of the event.

Hence my trepidation. While Mom appeared to be on board with my brother's plans, I wondered whether she remembered her mother-in-law's emotional trauma at being displaced.

On Thanksgiving morning, I arrived at the old homestead to find my brother in Mom's kitchen, carving the Thanksgiving ham. Our mother was hovering over the turkey, which was nearly ready to remove from the oven. Shortly before noon, a stream of pans, dishes, and bowls were conveyed outside to the runabout (an electric-powered light utility vehicle used to run errands on the dairy farm) and trundled next door to my brother's workshop. The shop floor had been cleared of current projects (like my brother's rebuilding of the family's old Willys-model Jeep) and a series of round tables and folding chairs set up in the open space—with enough room left over for the grandchildren and great-grandchildren to run about like maniacs. The pans, dishes, and bowls were arrayed on a long buffet table, people filled their plates to overflowing, and Thanksgiving dinner got underway.

“How does it feel to have dinner with everyone else, Mom?”

The question came from my brother.

“Pretty nice,” she replied, smiling, with no hint of reservation.

The leisurely meal lasted well over an hour, winding down with a dessert service. Mom and Dad were at the table where I was seated, so I kept an eye on her, nursing an abiding suspicion. Eventually various family members began to take their leave in order to meet other responsibilities. (My goddaughter would rack up five separate Thanksgiving events by the time she finished visiting relatives and in-laws and close friends.) Before the event had quite broken up, Mom announced that we would be meeting in the same venue for Christmas and my brother nodded his head in confirmation.

I guess those who remember history are sometimes doomed to worry needlessly about repeating it.
Posted by Zeno at 9:00 AM

Thanks for sharing a sweet story.

First of all, times and attitudes have changed in the past 40-50 years, especially with respect to women's roles. Secondly, your mother is more assimilated and likely better-educated than your Vovó was, so has a wider range of interests on which to base her self-esteem. I'm delighted to know that it went so swimmingly, and that there'll be an encore in a few weeks. Boas festas, amigo!

Honestly, I think an announcement like that from my mom would have had me worrying about what medical issue I wasn't being told about that required the move. This is despite fact that my sister has done most of the cooking for the past couple of years. Glad to hear that wasn't actually an issue.

My brother's place has indeed become the new holiday venue—including today. However, it's also clear that my sister is getting stuck with bringing over a disproportionate share of the food (compared with, say, my sister-in-law [or me, for that matter, since I bring nothing except my appetite—a man-thing in my family, I guess]).