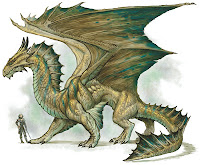 The competition for stupidest creationist argument is fierce, as any perusal of WildwoodClaire's “Dim Bulb of the Week” or Potholder54's “Golden Crocoduck” competition will amply demonstrate. Undaunted, they continue to strive to outdo one another.

I just stumbled across a most delightsome example of creationist inanity, laced with a generous dollop of cryptozoology. It's a video titled “The Secret History of Dinosaurs,” and you'll be charmed to learn that it has scraped together all of the spurious evidence for the survival of dinosaurs into the modern era (you know: dragons, Nazca, Ica stones, petroglyphs, la, la, la). In addition, however, it contains one of the loveliest examples of misinterpreted evidence I've ever seen. It's a small thing, but quite entertaining.

Apparently evolutionists have been suppressing the evidence related to dragons and sea monsters, now-endangered species of dinosauria that nevertheless linger in African jungles, Scottish lochs, and other obscure ecological niches. As the narrator explains, the coexistence of man and dinosaur has been disguised by shifts in language. He flashes a page from an old dictionary and points outs that “dragon” is now a disparaged term. At 3:55 into the video, he darkly observes that “dragon” is Now Rare.


The name that you are probably the most familiar with is “dragon.” Even up until 1946 the word “dragon” was found in dictionaries and has in its definition this telling description. 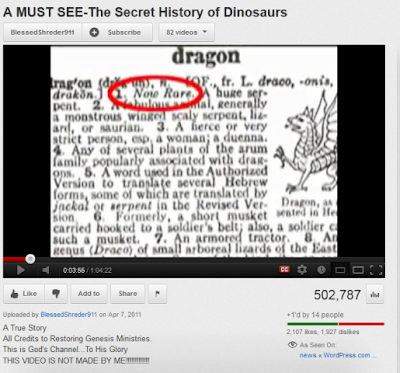 But do you see what the “telling description” really means? It's just a label on definition #1: A huge serpent. Apparently people seldom refer to big snakes as dragons. It doesn't mean that we nasty old evolutionists are suppressing the word.

And, yes, the rest of the video is just about as stupid. Big surprise.
Posted by Zeno at 8:00 PM

On a related(?) note, the island of São Jorge in the Azores is sometimes called a "sleeping dragon" because from the air it looks a bit like one, especially the resemblance of the ridge down the length of the island to a reptilian spine. Also (though probably coincidentally), St. George slew the dragon.

A map of São Jorge helps to make Kathie's point, although a photo the island's tip is perhaps even more persuasive.

Here's my translation of my friend Hernâni Candeias' poem about São Jorge (where he grew up):

As though painted and fallen asleep,
sunning himself in the waters,
the gigantic listless dinosaur lies,
his chest puffing like a bellows...
The beautiful beast rises late,
moving through the lagoons and beauty of the fajãs!
With eyelids half-shut he still enchants
through the morning fog...
The Star-King, his greatest ally,
warms and shines golden on his strong back!
He confides from afar that he is loved;
and he will endure throughout time and unto death.
But the Moon that, from the sky, woos him
during hot summer nights
tells him that the gloom of the thick veil
which shrouds him stirs the other dragons’ ire...
And the dinosaur that slides over the slopes
and peers through the steep cliffs of dreams
does not hear his beloved and turns his back to her
with that impassive air and dismissive gesture...
He whispers to her, along the road lit silvery by moon,
above the waters that are the dragon’s realm,
that the whole island isn’t mine, nor yours
it’s only the dream to which he gave his heart...
Lacerda, with music staves, raised the dream throughout the world
Leandro Silva composed the island’s vocal dream!
The dream’s immortal pages, down to the depths,
to the deepest depths, amazed by wonder...

The Oxford English Dictionary has the definition:

Thus I am sorry to report that in the last seventy years the humble dragon has gone from rare to obsolete, probably thanks to those evolutionists who wiped 'em out to cover up their wicked lies.

On a happier note we have, further down the page:

I think we can agree that nobody will miss *them*.

As a youngster I read a book called Professor Diggins' Dragons. (Judging from the listing on Amazon, it now appears to be a collectible though its message is as appropriate as when it was in print.) Dragons were beasts inside oneself, obstacles to self-fulfillment that needed to be understood and overcome. The little voice that says "you're not good enough" or "you can't" is a Dragon. The internalized parental objection to creativity "because it isn't useful" is a Dragon. Etc.

As someone who has lived with a really powerful dragon inside her called Depression, I wholeheartedly support Professor Diggins' attempts to lead the youngsters entrusted to him to face their dragons. It is only by learning to banish the dragons to a dungeon that you can truly achieve your potential.

BTW, Zeno, glad to see you've emerged from Inertiaville. I'm not going to help by positing that it never gets easier; my former thesis advisor, who taught a lot of classes this spring before semi-retiring this month, has been in low-energy mode ever since he turned in his grades. He hangs around the office, helping grad students with summer research (which he enjoys immensely), and otherwise getting very little done.

There is evidence that stories about dragons were validated by the discovery of dinosaur bones, particularly along the silk route where erosion revealed a good number of fossils. The assumption was that there had been a lot of dragons out in those hills, and most likely they were still around. They had the bones to prove it.

It's sort of like the evidence ancient Greeks had for the existence of titans. There were all sorts of mammoth fossils around and these were assumed to be the remains of fallen titans after a battle. In a few cases, the discoverers would even rebury the bones of titan, as loosely reconstructed by someone who had never seen an elephant, in a coffin along with a suitable memorial text. You can imagine what the discoverer of that artifact would think.

Of course, folks along the medieval Silk Road and ancient Greeks had an excuse, what with limited knowledge of anatomy, taphonomy and the like. What were they supposed to think? The bones were there. More modern sorts have a lot less of an excuse.

Returning more or less to the original topic (horrors!), Kitchen Mudge posted the following photo on her blog:
http://kitchenmudge.files.wordpress.com/2012/05/dontacceptscience.jpg

Are we talking Draco vulgaris or Draco nobilis