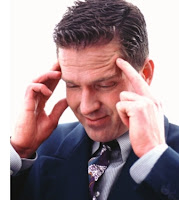 And that's not all

A friend of mine is (figuratively) banging his head against a brick wall. The results are similar to what they would be if his activity were literal.

Interestingly enough, his medical condition began quite misleadingly. Eventually his doctors figured out that his symptoms of disorientation, dizziness, and weakness were the results of “silent” migraines. While migraines are most commonly associated with acute, debilitating headaches, this is not the only case. The headaches might be absent, while the victim nevertheless experiences the distorted vision and weakness that migraines induce.

The diagnosis of silent migraines resulted in my friend's introduction to the extensive pharmacopeia of anti-migraine medications. Problem solved!

Things began to change. For one thing, my friend's prescriptions worked for only a limited time. As he became inured to the therapeutic effect of one drug and the symptoms ramped back up, the doctors would move him on to another. He was now working his way through the list of drugs, wondering how long this could go on. For another thing, the pain showed up. Classic, stabbing, excruciating headaches. “Silent” no more. Fortunately for my friend, the sharp, stabbing headaches are intermittent—triggered by loud noises (he suffers from hyperacusis). Only the dull pain in his head is constant, day in and day out (and denying him sleep, because there's no longer any such thing as a soft-enough pillow).

Now he was getting passed around in the medical community. The UC San Francisco headache clinic looked into his case and shot him up with drugs to “reset” his pain level. It failed. UCSF was on the verge of confining him to a hospital bed for a days-long infusion of a drug that required 24-hour monitoring when a bad reaction to a milder form of the medication provided a very serious contraindication.

The UC Davis Medical Center subjected him to a series of tests, none of which proved definitive. It was clearly something more than just a migraine condition. My friend was wobbling about with a cane and it took a regimen of physical therapy to help him relearn how to stay upright and walk like a sober person. The migraines had laid waste to his balance system.

The standard migraine drugs were used up and then recycled at higher and more dangerous levels. Relief was still merely temporary and palliative. His doctors began a series of off-label prescriptions (where “off-label” means using medications to treat conditions for which they are not formally approved). It was, in a word, a series of experiments. Each experiment lasted as long as a month or two. Much shorter, of course, in the case of hallucinations or other serious reactions. Recently the doctors started mumbling about using botox, but I'm not sure what that's all about.

But that was merely prelude. This year his condition escalated in a completely unexpected way. Let him tell it in his own words. It's a total mystery:


In early March I started to experience swelling in the front center of my neck. A couple of days later there was a small lump on the back of my neck. The lump in the front of my neck has continued to swell and the swelling has grown into my jaw. This past weekend a new, fairly large lump has appeared at the intersection of my jaw and neck just below my right ear. The swelling in my neck has put enough pressure on my neck to cause difficulty swallowing, occasional difficulty breathing, and the loss of my voice. (I can only talk in a whisper.) I have also had swelling in both underarms and in my groin, but the doctors can’t feel anything in those spots that would warrant more testing.

Blood tests suggested that I have hypothyroidism, and I’ve been taking levothyroxine (50 mcg/day) for over a month to combat that potential cause. The levothyroxine has lowered my thyroid stimulating hormone level to normal, and I’m still taking it per my doctor’s orders, but that drug hasn’t lowered the existing swelling, kept existing swollen areas from growing, or prevented new growths from forming.

I’ve had three ultrasound tests of my neck and though these tests have found a slightly enlarged lymph node that hasn’t grown or shrunk in the subsequent two tests, the node is too small for a biopsy. I’ve also been to the ENT and to a gastroenterologist without any success or insights. My primary doctor is now at a loss about what to do next.

While lymphoma has been suspected because of the swollen lymph nodes, nothing has ruled it definitively in or definitively out. The constellation of symptoms is totally confusing. 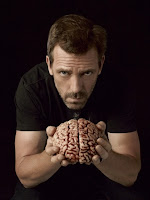 And Hugh Laurie is busy wrapping up his final season of House and isn't taking new patients.

Any ideas, anyone? Know anyone who might? Perhaps you have a better clue than any of my friend's doctors. They keep passing him back and forth like a hot potato, cheerfully suggesting to him that his life isn't really at risk because they can always resort to intubation if his throat becomes too constricted to permit adequate breathing. It's a comfort, isn't it?

Please feel free to pass this post along, link to it, or otherwise bring it to the attention of medically savvy professionals who can solve this puzzle. It's a headache—and then some.
Posted by Zeno at 3:00 AM

I am not, by any stretch of the imagination, a medical doctor, but this sounds very similar to when a friend of mine had lymphoma. If a tumor is impinging upon the thyroid, this would make the hypothyroidism another symptom.

Your friend might also try asking his doctors which diagnoses they have discarded (if any) as "nobody gets that". The incidence in the general population may be extremely low, but many M.D.s need a refresher on conditional probabilities.

Thanks, Miki. Lymphoma is certainly on the list of suspects, but his thyroid problem came well before the lymph node swelling. It's a puzzle and a half.

Riedel's thyroditis, maybe? Wouldn't account for the silent migraines at the beginning but sounds like it fits the later symptoms.

Thanks for the suggestion, Anonymous. I wouldn't be surprised if my friend's diagnosis is complicated by the presence of more than one ailment, creating a mishmash of symptoms. Riedel's thyroiditis, however, would explain several of them. He's going to ask his doctor about it. I forgot to mention that he also suffers from costochondritis, so his pains are many.

I wish your friend a good outcome on this, Zeno. Speaking not from personal experience, I know how hard a chronic illness can be, or chronic symptoms, or chronic pain, or chronic voices in the head.

I mean, each of us can take a certain amount of illness or even just annoyances, but on a daily basis it can become the focus of all our activities, the controlling factor in our lives. Like I said, though, I've been very lucky in my own experiences with ill-health, and I do attribute a lot of that to sheer luck.

Good for you for making your friend's health the topic of your blog. It's one more way to find a cure or at least a good diagnosis. In the more perfect world that will be coming soon, I hope, the process should've been reversed. If there were a massive medical database to which all doctors were connected, the odds would be pretty high that your friend's array of symptoms could be found to have happened before to someone else.

In today's world, though, we're at the mercy of luck or serendipity far too often. Is my doctor the best in the world? Even just the best in my city? Has my doctor read all the latest articles in all the journals that might relate to my symptoms? Has my doctor had a good night's sleep? Is he or she worrying about finances or strife at home? In short..... HELP!!!

Let's hope this blog post finds a matching or even similar set of symptoms somewhere in the world.

No lump large enough to cause difficulty swallowing, talking or breathing is too small to biopsy. Any lymph node significantly over a centimeter diameter should be considered abnormal until proven otherwise. Find someone who will do or order at least an FNA --fine-neeedle aspiration biopsy. The headaches may or may not be related.

I don't know about the swelling but in regards to the headaches: have your friend's doctors checked his spinal fluid pressure? The symptoms sounds a lot like what my best friend was experiencing with pseudotumor cerebri. It's generally a condition that occurs in women so they might have discounted it because he's male.

Oh! Forgot to add that pseudotumor cerebri is also often occurs in people with thyroid problems. Here's a link to some info on it http://www.ncbi.nlm.nih.gov/pubmedhealth/PMH0001391/

Husband (who teaches re disease processes) compiled the following comment and partial list of possibilities for your friend's consideration.
- - - - - - - - - -

It is difficult to diagnose rare disorders. I am puzzled by the statement that the lymph node detected by ultrasound is too small to biopsy when he has swollen lymph nodes in several places. It is simply a matter of sticking a needle in the lymph node and removing a small portion of the tissue. Here are some possibilities as to causes.

1. Lymphoma, which has been considered.

2. Epstein-Barr virus, which causes swollen lymph nodes, Burkitt's lymphoma (rare in
the US) and B cell lymphoma in immunodeficient hosts.

4. Polyoma viruses, which cause kidney and encephalitis infections in immunodeficients hosts.

7. Coccidioides immitis infection, which is common in the Valley and can cause systemic infection and rheumatoid nodules (this should be easy to diagnose). Infections are especially severe in immunodeficient hosts.

8. HIV infection (easy to diagnose, so I put it last. It could lead to the other things on the list).

9. Actinomycosis (a head and neck infection with common oral bacteria), which should be easy to diagnose, so not likely.

I greatly appreciate all the comments that have been posted here and thank everyone for their helpful suggestions. I have passed them along to my friend, who is sharing them with his doctors. His UCDMC physician has referred him back to UCSF for immunological work. All of his blood tests have indicated no infection. Auto-immune problems are suspected, but no actual diagnosis. And it may well be that matters are confounded by different but simultaneous conditions.

Did you see this on "60 Minutes" tonight re NIH's Undiagnosed Disease Program, directed by a Dr. William Gahl, that investigates rare diseases that are hard to diagnose?
http://www.cbsnews.com/8301-18560_162-57437577/hard-cases-investigating-rare-tough-diseases
Of course, after tonight's airing, I'm sure they'll be inundated with referral letters from doctors with potential patients.