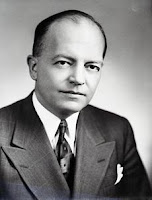 Once upon a time, an exciting young politician was elected governor of Minnesota. The 31-year-old “boy wonder” was clearly destined for great things, and within two years was giving the keynote address at his party's national convention—at which point he peaked.

Harold Stassen's high-water mark was that 1940 Republican National Convention, where he was part of Wendell Willkie's successful insurgent campaign for the presidential nomination. In 1944, Stassen was himself a presidential candidate. And in 1948. And 1952. He took a break in 1956, the year an incumbent Republican (Eisenhower) was seeking re-election, but Stassen was back at it in 1964 and every four years thereafter (except for 1972, when Nixon was seeking a second term). Harold Stassen died in 2001. However, his death had almost no impact on his election prospects. Those had predeceased him by nearly fifty years.

Today Ron Paul wears the mantle of perennial Republican presidential candidate, although he has a ways to go before he has as many lost crusades under his belt. In another distinction from Stassen, Paul is blessed with a visible and noisy coterie of devout supporters—supporters who live in their own special alternate universe. A letter to the editor of the Sacramento Bee is a case in point:

Re “Ron Paul wins majority of Maine GOP delegates” (Nation in brief, May 7): There's heated race going on in the Republican primary right now, but you wouldn't know it from the reporting by the mainstream media.

The MSM is reporting as if Mitt Romney has locked up the nomination already, which simply isn't true. The media is not reporting that there are huge turnouts of thousands at Ron Paul events all across the country; that Ron Paul has been winning delegates in many states, and that he has secured his name on the ballot at the Republican National Convention in Florida later this summer.

Ask yourself why the media is not covering this newsworthy information. Romney can barely draw 100 people to his rallies. It isn't over until it is over. Mitt Romney does not have 1,144 delegates yet, and Paul is gaining on him, fast. 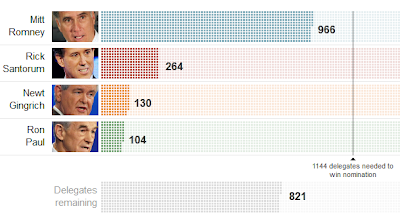 By golly! You know what? Letter-writer MN is right! According to a recent Associated Press tally, Romney has only 966 delegates. As for Ron Paul, why, he has ... 104! (Note to mathematicians: the exclamation point is for ironic emphasis—not factorial notation.) As illustrated in a New York Times chart of the AP data, there are 821 uncommitted delegates. Given that Ron Paul is “closing fast,” we can easily see that a sweep of all remaining delegates will boost Paul to a staggering ... 925!

Ron Paul's supporters really can't do the math, can they?
Posted by Zeno at 10:00 AM

The catch is that they're gaming the system; many of those numbers in the Romney or other columns aren't locked in. I won't go into all the gory details myself; look up Rachel Maddow's reporting on Ron Paul'sdelegate strategy, including her interview with the Paul campaign manager.

This was mean-spirited. I love it!

All those thousands of supporters at events really count for very little when there are states with hundreds of thousands (if not millions) of voters.

But yeah, paulites can't do math. They can't do a lot of things.

While John is correct to point out that the delegate counts are soft numbers, Ron Paul's forlorn hopes depend on such a dramatic Romney faux pas that the front runner's campaign collapses overnight and delegates abandon ship in droves. And in that event, Gingrich, Santorum, and gosh-knows-what would jump back in to pick at the bones. They wouldn't stand on the sidelines and give Paul free rein.

The GOP convention will be predictably boring and meretriciously mendacious.

Oops! I accidentally lost The Ridger's comment. Here it is, recovered from the archives:

But if Paul gets all the others, he'll be in position to block Romney, who will be able to block him.

Yeah, it's not going to happen, but Romney hasn't got it locked up. The RNC convention could be ... interesting.

No, it's not about causing delegates to abandon Romney.

Basically the argument goes like this: in many states, especially caucus states, the contests we've seen do not actually pick delegates. Delegates are selected later, leading up to state and national conventions. The Paul strategy is to focus intensely on those contests, trying to get as many delegates as possible who will vote Paul at the convention no matter what the popular primary/caucus vote was.

Everyone just takes it for granted that the delegates must and will follow the will of the voters, and the Paul strategy is about exploiting the fact that the actual rules don't say anything of the sort. I know this sounds incredible, but the campaign manager has said -- in public, on direct questioning -- that this is exactly what they plan to do. Here's the Maddow interview I referred to, from February: http://www.youtube.com/watch?v=axpoWVLXqm4

And if you were paying attention to the lead-up to the Iowa and Minnesota state conventions -- which nobody was because everybody knows that Mitt Romney already won -- this actually seems to be working; Ron Paul supporters are getting selected as state delegates in droves. We've got one week until Minnesota's state convention; pay attention when it comes.

Mainstream Republicans afraid Ron Paul’s steady accumulation of delegates will cause chaos at their national convention in Tampa just received a terrifying preview of what a worst-case scenario might look like.

In Oklahoma on Saturday, Paul supporters and Romney supporters reportedly came to blows as the Paul side fell short of electing their slate of delegates amid cries of foul play, including the use of a voice vote instead of a more painstaking roll call to decide the outcome. Speaking at the event, Romney surrogates Tim Pawlenty and the state’s own governor, Mary Fallin, drew jeers.

At the state convention in Arizona, also this weekend, the presumptive nominee’s son, Josh Romney, was booed off the stage by Paul supporters, some of whom derided his father as “the white Obama.”

At this point it’s way too late to keep Paul from having a sizable presence at the Republican National Convention, and likely control of enough state delegations to put his name up for a floor vote against Romney. But it’s still an open question just what these delegates and other Paul activists planning events for the national convention will do when they actually get there.