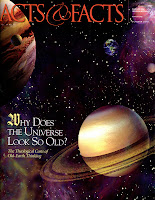 The October 2010 issue of Acts & Facts from the Institute for Creation Research is emblazoned on its cover with a colorful display of astronomical images, including the planet Saturn. Text is laid over the cover art, spelling out the question, “Why does the universe look so old?”

I think I know the answer to this one:

Poor creationists. They have to labor so diligently, so faithfully, and so blindly, to rationalize their God's duplicity. He may have implied in his holy book that the universe was created a scant few thousands of years ago, but then he went and made it look billions of years old. Either their God is a liar or he is a prankster. Loki or Coyote. It's not a very satisfying choice, is it?
Posted by Zeno at 7:00 PM

....and after much rambling about how desperately important it is to believe in a young universe, he finally gets around to answering the question in the title, to wit: omphalos, and sin.

There. Saved everyone else having to click through and read it.

Key point, of course, is that the Christians who believe in a young earth are labouring under a misconception even within their own belief system. Either their God is lying about the age of the universe in the Bible, or he's planted lies all through His creation. Either way, he's a liar. And who is the Lord of Lies? Well, duh: Satan, obviously. Which means that somewhere in the recent past, about the time that Christians started pushing YE Creationism strongly, God was usurped and Satan took over. So Creationists are Satanists, by their own definitions!

Do tell, Zeno, did "Acts & Facts" also show the Sun and other planets revolving about the Earth?

The cover appears at the top of this post. As you can see, Kathie, the various celestial bodies appear to be floating about at random. It should get exciting soon, though. There's no way Jupiter can loom that close over Saturn without a major encounter coming up.

Kathie's question is more to the point than you might think. The Omphalos theory has a distinguished predecessor: the pet theory of Pope Urban VIII that the way to reconcile the evidence that the Earth moves with Holy Scripture is that God could make the world work in any way he chose, and he could make the evidence look however he wants, and the two didn't have to be the same.

He insisted that Galileo must put this idea in his new book, which he had finished writing and had submitted for approval by the Holy Office. So Galileo retrofitted this in the book, of course, and got permission to publish. He even gave the Pope's idea the very last word, and had his mouthpiece character call it "a most admirable and angelic doctrine."

And the Inquisition decided that it didn't like the way he'd presented it, and complained that he had insulted the Pope. To this day, the Inquisition's accusation is taken as Gospel -- so to speak -- by a lot of people who are more Catholic than the Pope (meaning John Paul II, or course).

Does this give you a warm feeling about 19th-century England by way of comparison?

Oh I don't know. If there is a god, I think it would be nice if it had a bit of a sense of humor. Being exclusively and relentlessly 'good' in some peculiar way that still allows for horriffic suffering seems simultaneously contradictory and utterly dull.

Porlock Junior attributes more knowledge to me than I possess(blush).

I was aware that Galileo had challenged Catholic teaching in positing that our system was heliocentric, which observation he was compelled to recant on pain of excommunication, but I didn't know some of the other details that PJ presents. Of course, wasn't this also the era of "how many angels can dance on the head of a pin"?

I read as much as I could stand of the Acts & Facts article while having a late lunch that consisted of, fittingly, toast and beans. When it was mentioned that God rested on the seventh day, for the first time it occurred to me that an all-powerful being (he is supposed to be one, isn't he?) shouldn't need to rest. I'm sure I'm not the first to think of this by any means, but I haven't heard it discussed. I wonder if the apology for this is represented by the term "divine rest" that was in the article.

Meanwhile, this sentence cropped up: "This view must be rejected out of hand as a direct contradiction to the inerrancy and infallibility of Scripture." It's funny, I know that they think this way, but seeing it put so flatly makes my beans want to reemerge. Too bad I can't unread that sentence instead.

BTW, why is "Scripture" capitalized?

"Scripture" is usually capitalized because it's a proper noun: the name of a very specific thing. But, admittedly, sometimes people lowercase it as "scripture" because they are referring merely to religious writings (but even then it's usually clear that the references are to the Hebrew Bible [Old Testament] or the Christian addendum known as the New Testament).

Capitalization is practiced much less than it used to be. I recall when it was standard to use "President" instead of "president," but modern American English shies away from frequent use of uppercase. Things change. (I see, however, that The Times of London still favors "Prime Minister.")

The capitalization issue reminds me of the time we intermediate students challenged our Portuguese TA in class after she'd marked all of us down one point on a written translating assignment for rendering the word "Dilúvio" as "flood" in the generic sense of inundation, rather than as "The Flood" in the sense of Noah.

The TA had a full-scale mutiny on her hands in class after several of us showed her that our various Portuguese-English dictionaries listed the meaning only as "flood" and "deluge. She was nonetheless unmoved, contending that we ought to have known that when the word is capitalized in Portuguese it can only refer to Noah's flood.

I suspect that because our TA was a Brazilian who had grown up during the ditadura, she had been educated in an environment where students were never allowed to challenge a teacher's authority, so she took umbrage at our spontaneous display of the American sense of fair play.

I strongly suspect you're right, Kathie. (Although a mere TA is expecting a lot if she expects the deference due a professor!)

Where did you study Portuguese? I never have and what I know is the remnant of childhood exposure.

Zeno, I have a fairly low threshhold for the amount of personal info I post online (a stance I assume you understand, since you've exercised your right not to use your real name on this blog!). So with your forbearance, I'd prefer to answer your questions off-line in an email (if it's any reassurance, I didn't study Portuguese in California). Thanks for your understanding.

Of course, Kathie, I entirely understand. That's what my e-mail address is for anyway.

But I think if I ran across "the Flood" in English, I'd know it meant the Noah one. (Of course, I know nothing about Portuguese capitalization usage.) Just as I get a jar when I see a line like this:

Today I watched the greatest thing of all
A flock of birds, preparing for the Fall

Since I don't capitalize the seasons, my first thought (despite actually knowing the song pretty well) was the Fall from Eden...

It suggests, Ridger, that the birds were in on it from the beginning -- but the serpent persuaded them not to blab to the humans about his plans.

Zeno and Ridger, I thought birds evolved from reptiles, making them all just kissin' cousins, right?