They have a proposition for us

I know that the proponents of Proposition 19 aren't really talking to me when they cry “Just Say Now!” and try to appeal to my generation's long and intimate acquaintance with marijuana. It's not my thing. And I am not at all representative of “my” generation. Nevertheless, I am almost certain to vote in favor of Proposition 19 on California's general election ballot next month. If it passes, the state's various legal proscriptions of pot will be expunged and a new era of good feelings will be ushered in.

Passage of Proposition 19 is a fair bet to set off an overreaction by the federal government, whose laws misclassifying marijuana as a narcotic would remain on the books and whose zealotry in the unending war on drugs appears to be unabated under the Obama administration. The main reason to vote for Proposition 19 is to poke one's thumb in the eye of the people who scream constantly about our always having been at war with Eurasia. (Or is it Eastasia? I forget.) Criminalization of pot has merely lumped the moral equivalent of beer with the physiological equivalent of eye-blinding bathtub gin. Does anyone except the misinformed and the professional narcs really believe that marijuana deserves to be classified with heroin?

They must be on drugs.

The San Francisco Chronicle, the newspaper of record for the geographical region centered on the Haight-Ashbury, offered a carefully reasoned and detailed editorial explaining why Proposition 19 is a flawed measure that deserves a No vote. As an exponent of reason myself, you'd think I'd be more susceptible to the Chronicle's laundry list of potential problems:
I think these are all valid concerns, yet I care about them about as much as a chronic pothead. “Yeah, wha—?” 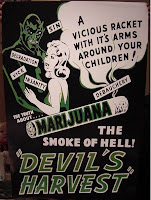 Let the lawyers and the courts sort it out. They'll be happy to.

Drug policy is already chaotic and already stupid and Proposition 19 would merely underscore that. I fear, of course, that teenagers will begin to reject pot once it becomes just another garden plant in grandpa and grandma's backyard or window box. Serious uncoolness is about to set in.
Posted by Zeno at 11:00 AM

It makes a lot of sense to pass this proposition, I think. I read about it a while back and the arguments for passing it were very compelling! Maybe the local south-central Idaho drug patrol can spend their time doing something besides combing through corn fields for marijuan planted by the "mexican cartell" (every law-breaking hispanic is a member of the Mexican cartell, I guess).

"They must be on drugs."

They must be: Drug warriors - it's time for you to go to rehab

"I fear, of course, that teenagers will begin to reject pot once it becomes just another garden plant in grandpa and grandma's backyard or window box."

That's what my mother said at dinner once about 20 or 30 years ago: keep rebellion harmless. Make this stuff legal, and kids will take up stuff that really is dangerous.

I don't think she was being entirely serious. There was already enough worse stuff going around at that time.

Your Higher Power lives inside you

Is that last anti-weed poster real? Did no-one proof read it before printing?

"A vicious racket with it's arms around your children"???

An apostrophe?! In a possessive 'its'?? Somehow I can't help but hate whoever produced this poster.