Take two nothings and don't call me in the morning

The Associated Press covered House minority leader John Boehner as the Republican congressman made his party's case for its position on health care reform. First of all, the GOP doesn't really think there's a health crisis. The socialized medicine programs we have now (Medicare, Veterans Administration) are fine the way they are and don't need to be expanded. Furthermore, the Democratic plan is just too darned big. The Republicans don't see any reason that a national program should require as many pages as found in the current consensus plan being advanced by House Democrats. In a telling AP photo, Boehner mockingly poses with the stack of paper representing the Democratic plan. You can see the multi-ream pile on Boehner's right. Meanwhile, that's the GOP plan that Boehner is brandishing in his left hand. The entire plan. 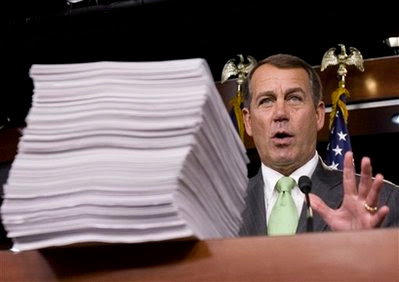 But that's been the solution proposed by the GOP in issue after issue: they complain about any plan we put forward and make moves to obstruct while never producing an alternative.

I know that saying the GOP lies is redundant these days, but take a good look at that stack of papers.

There are four reams of paper (2000 sheets) for a bill that is only 1018 pages long. They probably used grandpa print, you know, the print that is used in books for those who can't read the small print anymore.

This is one of those McCarthy moments. You know the one where the lying rat holds up a laundry list and claims to have names. These people are snakes (apologies to the snakes).

Damn, Phillip. I noticed that, but forgot to point it out. Thanks for the comment!

Still, you're giving the Republicans too much credit. Grandpa print? I doubt they went to that much trouble. I think the lying bastards just stacked up two copies of the bill. Either that, or they inserted blank pages.

They really are scum.