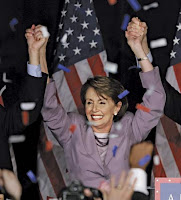 The right way to write headlines

“From my perspective, we won last night. We had one race that we were engaged in—it was in northern New York. It was a race where a Republican has held a seat since the Civil War, and we won that seat. We had a candidate that was victorious who supports the health-care reform. So from our standpoint, we picked up votes last night, one in California and one in New York.”

There were two special elections for congressional seats last night and the Democratic Party won them both. The 10th District race in California was a romp by Lt. Gov. John Garamendi, who bested his GOP rival by more than ten percentage points. Garamendi thus retained for his party the seat that had been occupied by Democrat Ellen Tauscher. In New York's 23rd District, Democrat Bll Owens seized a seat that Republicans had controlled for more than a century. Pending a final tally (including some additional absentee ballots), Owens defeated Conservative Doug Hoffman by four percentage points. Hoffman's defeat suggests that his fellow teabaggers are not as numerous in upstate New York as right-wing pundits would have us believe. There are just enough to poison the Republican Party—not enough to supplant it.

The election night results produced a one-seat increase in the Democratic majority in the U.S. House of Representatives—just in time for the vote on health care reform.

In the light of this excellent news for Democrats, what are we to make of the hub-bub concerning GOP victories that affect state offices rather than federal offices? These may turn out to be unsatisfying consolation prizes in the long run. If the mainstream media were run in Fox News mode, but as tilted toward Democrats as Fox is toward the far right, we would be reading the following headlines: 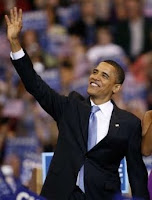