God'll get you for that

I keep hearing religious people say that “God is not mocked.” What they really mean (since God is actually mocked all the time) is that the divinely benevolent invisible “man in the sky” will get even. So there!

We must therefore be careful not to offend the easily offended resident of the cerulean heights. My father thoughtfully forwarded me some “inspirational” spam-mail that had all the usual earmarks of multiply-forwarded tripe. It's based on a true story, and is supposed to stir the reader into righteous indignation that officials at public high schools can't lead attendees at football games in prayer. (Please note that football is a religion to a lot of people.)

Here are some key bits of Dad's forwarded e-mail:

This is a statement that was read over the PA system at the football game at Roane County High School, Kingston, Tennessee, by school Principal, Jody McLeod:

"It has always been the custom at Roane County High School football games, to say a prayer and play the National Anthem, to honor God and Country."

"Due to a recent ruling by the Supreme Court, I am told that saying a Prayer is a violation of Federal Case Law. As I understand the law at this time, I can use this public facility to approve of sexual perversion and call it "an alternate life style," and if someone is offended, that's OK."


"I can designate a school day as "Earth Day" and involve students in activities to worship religiously and praise the goddess "Mother Earth" and call it "ecology."

"I can use literature, videos and presentations in the classroom that depicts people with strong, traditional Christian convictions as "simple minded" and "ignorant" and call it "enlightenment."

"However, if anyone uses this facility to honor GOD and to ask HIM to Bless this event with safety and good sportsmanship, then Federal Case Law is violated."

"This appears to be inconsistent at best, and at worst, diabolical! Apparently, we are to be tolerant of everything and anyone, except GOD and HIS Commandments."

I seem to have missed the commandment that says “Thou shalt pray at sporting events.”

"Nevertheless, as a school principal, I frequently ask staff and students to abide by rules with which they do not necessarily agree. For me to do otherwise would be inconsistent at best, and at worst, hypocritical.

"For this reason, I shall "Render unto Caesar that which is Caesar's," and refrain from praying at this time."

"However, if you feel inspired to honor, praise and thank GOD and ask HIM, in the name of JESUS, to Bless this event, please feel free to do so. As far as I know, that's not against the law -- yet."

Oh, oh! She's on to us! The next step, of course (supported by all secularists as part of our international conspiracy) is to ban private prayer. We dished the public stuff, next it's equipping a national police force to hunt down and punish people who pray in secret. (I know it seems impractical, but Satan commands!)

The only place they didn't pray was in the Supreme Court of the United States of America -- the Seat of "Justice" in the "one nation, under GOD."

It gives you a lump in the throat, doesn't it? (Try to keep it down.) And anyone who didn't pray was beaten up in the parking lot during half-time. (I just made that last bit up. I doubt anyone dared not pray (or at least pretend to) in the face of so much public pressure.)

This message in my in-box concluded with the exhortation common in such e-mail: “If you are not ashamed, pass this on.”

Actually, I am a little embarrassed that I have so many family members who think this is a telling tale and that it's worth sharing.

I could dismiss it as just another example of the small-mindedness of the true believer, who insists that the public sphere should conform to his or her personal religious beliefs—and that local majority rule can establish a religion because that's what (most of) the people want. But I didn't simply ash-can the message.

Something about “Kingston, Tennessee” tickled my brain cells. I poked it into Google to discover the following:

And last year, a billion gallons of muck containing coal ash flooded the town of Kingston, TN, in a spill 100 times larger than the notorious Exxon-Valdez spill.

An Act of God! The prayer incident occurred in 2000. The toxic ash spill happened in 2008. Post hoc ergo propter hoc, y'all!

I readily confess that this is a puzzler. Despite my nonbelief, I'm wondering if perhaps God exists after all and gets pissed off when his silly followers make asses of themselves.

“These jerks are an embarrassment to me. I think I'll smite them.”

Ashes to asses, you true believers. 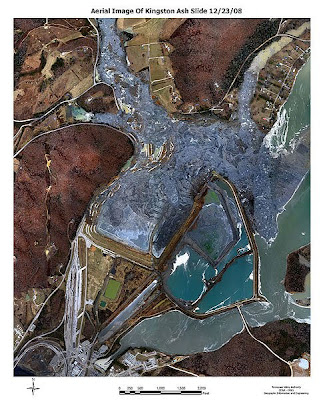 What I find particularly disturbing is that this event (the principal's speech, that is, not the ensuing Great Flood) actually happened.

I had assumed this was just another of those crap emails, but Snopes confirms it to be true.

This happens all the time around here. I live in east TN, probably less than 2 hours away from Kingston/Roane County. I don't think there has been one football game this year that didn't start with a prayer. The culture is positively saturated with religion and I've pretty much given up on even trying to count the number of establishment clause violations that happen around here.

Kingston TN is just as Southern Fried said... I grew up about 30 miles from there.

Oh come on, you doing the wrong thing by saying/thinking that true believers doing wrong. They doing fine, despite the brain disorder they have which force them to vision something to fear of.