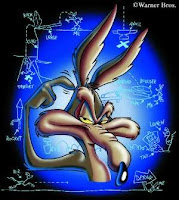 I know that people feel an obligation to predict a close presidential race, but all signs point to a blow-out for Obama. Only an excess of complacency and a string of egregious errors would be likely to usher McCain into the White House and so far Sen. Obama has shown no inclination to crack under pressure. Nevertheless, people must give lip service to the notion that McCain has a fighting chance and the Republican election machinery is grinding its gears and trying to shift out of neutral.

This weekend I received a message about the 2008 Victory Plan that will supposedly propel the GOP nominee toward electoral triumph. According to the National Black Republican Association, the 2008 Victory Plan is elegant in its simplicity: To win, all John McCain has to do is win 25% of the black vote.

Excuse me? Twenty-five percent?. Did someone forget a decimal point between the two and the five? Hillary couldn't rack up 25% against Obama. In what alternate universe can J. Sidney McCain III dream of such a feat?

The delusion known as the 2008 Victory Plan has four steps: 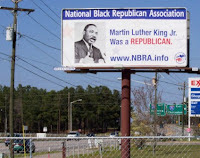 MLK billboards? That's right. They claim that Martin Luther King, Jr., was a registered Republican. While that sounds weird today, it shouldn't be that surprising if it were true. Although no one has turned up a GOP registration card signed by Martin Luther King, Jr., we know his father was a member. After all, the Republican Party was the party of Lincoln, the president who issued the Emancipation Proclamation. The Democratic Party was the party of Jim Crow and the Solid South. Black voters had every reason to sign up with the GOP.

The National Black Republican Association is nostalgic for the good old days and argues that African Americans should come home to the Republican Party. As cited approvingly by NBRA chair Frances Rice, “the Democrat Party is as it always has been, the party of the four S's: Slavery, Secession, Segregation and now Socialism.” What the NBRA seems to have missed, however, is that Richard Nixon's deliberate “Southern strategy” brought the Republican Party electoral victories in the short term at the cost of abandoning the black voter. Nixon embarked on a campaign to attract the votes of Southern whites who were disaffected by the Civil Rights Act of 1964 and the Voting Rights Act of 1965. Those measures were pushed by President Lyndon Johnson, a Southern Democrat who broke with his party's racist heritage.

Once established in the White House, Nixon began to pay off his political debts to his Southern supporters with such actions as the Supreme Court nominations of Clement Haynesworth and G. Harrold Carswell. Both nominations were defeated when the former turned out to be insufficiently careful about recusing himself in cases where he had a financial interest and the latter was shown to be an utter mediocrity who had defended segregation. In response to Nixon's solicitous pandering, white voters in the Solid South began to build today's GOP domination of their politics. Local politicians adapted to the trend. Although he had been a protege of Lyndon Johnson, leading Southern Democrats like John Connally abandoned the Democratic Party and signed up with the GOP.

While the Republican Party now holds sway over the Solid South, it's paid a steep price in terms of the African American vote. The party of Lincoln now commands the allegiance of approximately 4% of black voters. In arguing that African Americans should cling to their Republican heritage, the National Black Republican Association is stuck with such ancient talking points as Democratic opposition to civil rights. The NBRA cites such examples as Sen. Robert Byrd's former membership in the Ku Klux Klan, as if his mistakes of many decades ago have any significance in 2008, a time in which Byrd enjoys a 100% rating from the NAACP and is on record as a supporter of Sen. Obama's presidential campaign.

The Republican Party's 25% pipe dream isn't even new. In 2004 Ed Gillespie was chairman of the Republican National Committee and he was touting the GOP's plans to make inroads into the minority community. What was the result of that earlier strenuous effort? George W. Bush's share of the black vote rose from a minuscule 8% in 2000 to an anemic 11% in 2004. The 2008 Victory Plan envisages Sen. McCain more than doubling President Bush's 2004 share of the black vote in a campaign against Sen. Barack Obama. Is this a realistic prospect?

“the Democrat Party is as it always has been, the party of the four S's: Slavery, Secession, Segregation and now Socialism.”

Doesn't she see that socialism is diametrically opposed to slavery, segregation, and thus this particular secession?

and even ignorance doesn't protect you any more!
-- The Lion King

I still can't help but think people should insist on calling it the "Republan party" as long as they insist on talking about the "Democrat party". What's ic for the goose is ic for the gander.

I hope you're right. I seem to recall something about the Republan's success in getting away making taxcuts &c for the rich is down to 'the american dream'. Everybody expects that someday they'll be rich.


What should we foreigners hope for in regards to Clinton? Veep is out of the question, of course, since half the Dems hate her. It'd be a nice gesture to offer her the job, of course, if one could be sure she'd turn it down.

But does she have a place in the cabinet? Minister of health? Or Attourney general? In charge of the war crimes tribunal against the current government? (A guy can dream, can't he?)

Or is she a stealth neocon too? I seem recall a rather disturbing analysis of her participation in prayer groups recently.

Personally I hope she checks out, in which case I'd love to see Obama choose an old, experienced, white man as his veep (sad, yes, but so is life). Kerry would make me very happy, but I think I've heard Edwards mentioned.

This older guy could then bow out after the first term at which point Obama would hopefully have had enough success to carry over Clinton as VP for the second term, positioning her for the lead in 2016. At which point she could put Obama on the Supreme Court just like Taft (Obama is a constitunial lawyer, right ...?).

Zeno: "I know that people feel an obligation to predict a close presidential race, but all signs point to a blow-out for Obama."

It's not just an obligation. I hope and believe that it will be a blowout, but - right now - the numbers aren't there.

Check out FiveThirtyEight.com, Pollster.com, and 270ToWin.com.

Obviously, the idea of McCain getting 25% of the black vote is insane. Against Obama, McCain will be lucky to hit 5%.

That said, the electoral vote numbers are very close, and McCain is leading in several states we need to win, Michigan especially, but also Missourri, Nevada, and New Hampshire.

The polls are close in Iowa & Wisconsin and tied up in Ohio & New Mexico - both states where Kerry was leading in 2004, but that the Republicans managed to 'win' via a combination of dirty tricks.

Like you, I'm hoping for a blowout, and fully expect that the margins in close Blue states will widen, and that Obama will flip the close Red states once the campaign is under way and people start comparing Obama and McCain in the debates. Hell, I'm even hoping we can win Virginia.

In the meantime, it's foolish to count McCain out while he still enjoys broad support among moderates due to misleadingly positive, 'Maverick'-y, media coverage.

Maybe by the end of July or August we'll be able to confidently predict a blowout. Until then, until the polling numbers are there, we shouldn't - it just generates complacency when we need people active in the campaign to ensure we win.

the NBRA has about as much chance of succeeding as a mosquito has to fly from Alberta to Guatemala.

Do they really think that Blacks will vote for McMoron, the man who voted against civil rights legislation, refused to vote for MLK's holiday,voted against Katrina relief AND posed for a picture with Bush while New Orleans got flooded. Do they think we're stupid or something???
http://truth-about-mccain.blogspot.com/

AND the man has the gall to show up in Kenner surrounded by a rogue's gallery of racists like the founder of Stormfront, the most racist website around. (See the same website listed above).
Honestly, is this the purpose of the Black Republicans? To get us to vote for white supremacists?

But everyone in this thread is forgetting one small point.

The letter was a fund raising letter designed to pick the pockets of any foolish elderly whites who might be so mired in stereotypes and racial anxiety that they would jump at the chance to send these fraudsters some money that the contributors cannot reasonably spare from their own budgets.

Don't get sucked into spending time on sophisticated analysis of the fantastical thinking set out in such scams. The letter senders may not even be trying to raise money to spend on supporting McCain, as opposed to supporting their own lifestyles!

Maybe the best response to such junque mail is to forward it to the state Consumer Fraud Division, to suggest an investigation into the bona fides of the folks who are soliciting contributions!

Yes, Hardheaded Liberal, it was most definitely a fundraising letter and a choice example of the genre. Treating it "seriously" was the whole point of the post. Yes, I know: easy target.

Don't worry, JGabriel, I have no intention of being complacent concerning the need to work hard again McCain. The media keeps treating McCain with kid gloves and that permits him to remain close to Obama in the early polls. We need to expose his absurdities so that the misnamed "Straight Talk Express" goes straight into the electoral dumpster.

I bet there are a lot of high-powered black Republicans who are hella chagrined right now. Maybe it will encourage them to take another look at their party.

I love the signs, though.

Notice the operative phrase "was a Republican".

If he were alive today, would he be a Republican, the party that routinely blocks civil rights laws?