Fact or fiction in Zimbabwe

Not all black and white

Rhodesia was a British colony in 1965 when its prime minister, Ian Smith, unilaterally declared its independence. Britain had been pressuring its African colony to begin a transition from white minority rule and allow Rhodesia's black majority to participate in the colony's governance. Smith responded with the paternalistic argument that black Rhodesians were not prepared for self-governance and remained at the head of a white minority government for another fourteen years.

Since 1980, Robert Mugabe has done his best to prove that Ian Smith was right (as least in the case of a nation led by Mugabe), turning the prosperous food-exporting Rhodesia of forty years ago into the impoverished and starving Zimbabwe of today. Mugabe is back in the news, of course, prating about his God-given mission to rule Zimbabwe and promising to defy any defeat at the ballot box. Although he came in second in the recent presidential election, Mugabe has since driven his rival to withdraw from the June 27 run-off election and to seek political asylum in the Dutch embassy in Harare, Zimbabwe's capital city. Mugabe likes elections only if he wins them. 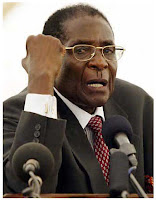 Mugabe's Zimbabwe is a fertile ground for mischief-making, even if it's no longer fertile for raising crops. While Rhodesia's white farmers raised enough crops to allow the nation to export them, the disproportionate white ownership of arable lands was a vestige of the colonial era and an unsolved problem for the new successor nation of Zimbabwe. But “land reform” proved elusive and its abuse led to outright expropriation of white-owned farms. Eric Harrison, one of the dispossessed white farmers, describes the outcome of land reform: “They gave it to party members. Some of the party members and politicians had more than one farm.”

Harrison has written his memoirs of his life in Rhodesia-Zimbabwe. They've been published in a book titled Jambanja. Harrison was featured on KSFO's weekend talk show hosted by Barbara Simpson, who styles herself as “The Babe in the Bunker.” As right-wing talk-show hosts go, Simpson is no Melanie Morgan. Since Morgan was cashiered earlier this year (ostensibly for budgetary reasons), Simpson holds up the distaff side of KSFO's rant-radio format. She's pretty far to the right, but occasionally lapses into periods where she emulates a broadcast journalist. Simpson was in this mode on Saturday, June 21, when she had a live on-air interview with Eric Harrison, who was on the phone from Zimbabwe.

Despite his grievances against the current government of his homeland, Harrison was remarkably forthright and balanced in his observation. Speaking about the controversial period of Rhodesia's white-minority rule, he said, “There's two sides to the story. And I'm sure that if I had been born black I would have been on the opposition side.“

Simpson asked him about one of the favorite talking points of the paranoid right-wing when discussing Zimbabwe: “Is there any truth to what I've read and heard that in fact some of the farmlands were given to—I know to the party members—but also to Chinese people and to people from Libya and government officials from those countries? Have you heard of that at all?”

Harrison didn't quite shoot it down, but he pulled it down several notches when he replied, “I've heard of it but I can't verify it.” A lifelong resident of Zimbabwe has heard the rumors about Red China moving into his country, but he hasn't seen it for himself. Will American conservatives ease up on this claim and look for some substantial evidence before they again assert it as fact?

Less than an hour after hearing part of Simpson's interview with Harrison, I punched the buttons on my car radio (it's not healthy to listen to KSFO for very long) and found myself listening to Dr. Stanley Monteith. “Dr. Stan” is a right-wing loon who loves conspiracy theories (9/11, AIDS, fluoride, New World Order, etc.). He was chatting with a South African correspondent who was sharing the “truth” about Zimbabwe. I didn't catch the fellow's name, but he was assuring Dr. Stan that the Chinese communist takeover of Zimbabwe was well advanced. In proof of this, he offered the observation that Chinese consumer goods were available throughout Zimbabwe. (It appears that China is making great progress in taking over the United States, too, then.) And, as the cherry on the sundae, Dr. Stan's interlocutor noted that “China is taking over Zimbabwe's farms.”

A white farmer from Zimbabwe may not be able to confirm the rumor from within the country itself, but it's self-evident when viewed from South Africa. And it's hawked as confirmed fact on right-wing radio.

Barbara Simpson had better get with the program and stop asking questions. Otherwise, KSFO may have to lay her off, too.
Posted by Zeno at 3:00 PM

While I would think that China has the resources to outright buy large parts of Zimbabwe, I don't see why China would even want the land. It might be a little bit plausible if Zimbabwe was an oil-producing country like Sudan ...

That Zimbabwe might be giving land to Libya sounds a bit more plausible, though, since Zimbabwe does owe a lot to Libya for its oil imports.

Yoo has a good point. Why would China want farms in Zimbabwe? Then again, right-wingers always seem to have a problem with "why" questions when it comes to their pet conspiracy theories du jour (and de semaine, d'annee, de siecle, you pick). On the other hand, their rationale is probably pure projection. Just because American imperialism operates under the principle of "Manifest Destiny" doesn't mean everyone else's does...

Professor Z, I've nominated you for the Arte y Pico award as one of the five best blogs on the Internet. I would have sent you an email describing the award but I don't have an address for you. So, please stop by my blog to pick up your award.