I had not realized this until now, but I have a lot of atonement to do. Thanks to the mainstream media's constant pandering to the right-wing talking points of the day, I finally understand that I am responsible for decades of extremist ranting from the pulpit of my parish church. Mea culpa!

It's been many years since I've bothered to go through the motions of adhering to the Catholic faith (and even longer since I've believed in it), but I used to sit quietly through sermon after sermon. These homilies varied dramatically, depending on whether they were delivered in the Newman Center chapel of a university (where suspiciously liberal Jesuits enrolled in the local law school might be found holding forth) or in the small church of my home parish, but I know now that I'm responsible for everything the priests said. (Thank you, Fox News, for causing the scales to fall from my eyes! Amen!)

I must confess that my greatest burden of guilt is the legacy of my adolescence. In those days, as I attained the age of reason, I gradually realized that it was quite remarkable that our small-town parish was graced by the presence of a purple-sashed monsignor as its pastor. “Monsignor” is an honorific bestowed on certain Catholic priests as a mark of distinction or special favor; the title may come in recognition of extraordinary service or exemplary scholarship. Since it's a mark of special favor, “monsignor” is not a title one expects to find on a priest exiled to a tiny parish in the middle of nowhere. What bishop had Monsignor pissed off that he was banished, purple sash and all, to the rural counties of central California?

Although he undoubtedly chafed at the demeaning assignment, Monsignor found outlets for his frustration, channeling his unhappiness into his sermons. Monsignor's sermons were, shall we say, special. He would stand behind the communion rail, facing the congregation with his hands tucked into his vestments, rocking back and forth on his heels as he inveighed against the world, the flesh, and the devil. While he did talk about the cardinal virtues of faith, hope, and charity, it was mostly to point out their absence in our parish. True Catholic religiosity was elsewhere, particularly back in his childhood parish in Pennsylvania (which we parishioners began to refer to wryly as “the holy land”).

“The heat in California is oppressive,” Monsignor would observe. “It reminds one of hell. That's probably appropriate, since this is a land of priest-killers.” The supposed basis of our anticlericalism would change from week to week—not putting enough in the collection basket, refusing to volunteer to police the rectory grounds, not showing up for choir practice—but the priest-killing theme was a constant. Monsignor was also irritated by the presence of heretical congregations in the community and our lack of militancy in driving them out. While he never quite advocated that we take up torches, pikes, and staves, it was understood that each Episcopal, Methodist, Baptist, Lutheran, and Presbyterian church in the region was a rebuke to our tepid Romanism.

Monsignor was a staunch advocate of child beating (he called it “discipline,” of course), subjugation of women (he called it “wifely obedience,” naturally, or sometimes “submission”), and capital punishment (or so it seemed, since he often lamented the abandonment of the practice of stoning sinners). He was also right at home with the notion of mortification of the flesh, sometimes repeating stories about how people back home (in the “holy land”) would suffer any travail in order to attend church.

He especially liked the story of the old lady who slipped on the ice as she struggled to get to mass: “She cracked her head open and there was blood all over the place, but did she give up? No! She wrapped a babushka around her head and made it to mass!” I was too timid in those days, of course, to ask whether she bled to death during the service and thus died in a state of grace, going directly to heaven (do not pass Go, do not languish in purgatory). The lesson was clear: no suffering was so great as to excuse one from church attendance. If anything obscured the lesson, it might have been that church attendance itself seemed a form of acute suffering. 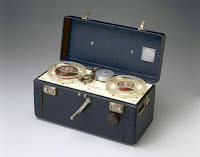 My parents fraternized with the enemy, our family frequently going out to dinner or on vacation trips with a Methodist family. Occasionally we regaled them with tales of Monsignor's rants, but our accounts were a pallid substitute for the real thing. One Sunday my father gave my mother a small reel-to-reel tape recorder to smuggle into church. In its leatherette carrying case, it looked a lot like an unattractively clunky purse. Or tackle box. Dad used the recorder during the service to tape Monsignor's fire-and-brimstone sermon. Our pastor did not disappoint, hitting his favorite themes of California priest-killers (us!), the satanic heat of the state (true!), and the slyly seductive ways of the heathens that surrounded us (like Methodists!). We later played back the sermon for the amusement (mixed with horror) of our Protestant friends. I suspected we were guilty of some kind of sin of disrespect, but I decided against including it in my next confession. (“Bless me, Father, for I have sinned. We tape-recorded your homily and used it to scare the bejesus out of our Methodist friends. Oh, and we have Methodist friends. I am truly sorry for all my sins.”)

I served Monsignor as an altar boy for a while, but I was never persuaded that I needed to pursue the priesthood. It didn't seem that attractive a vocation for some reason. Can't quite put my finger on it, though. His influence may have been stronger on my mother, however, who found it amusing for several years to shout “Blow it up!” whenever we passed a Protestant church (even if we were in the company of our Methodist friends). Oh, how we laughed!

That's right. I come from a family of terrorists. I guess I can never be president.
Posted by Zeno at 10:00 AM

But Zeno, look on the bright side of all that misery: it cleared the way for you to think through the theological BS fairly early on. I grew up in Catholic parishes where the focus was peace, love, and charity, and it was far more important to help your neighbor than confess your sins. All that positive indoctrination made it much harder for me to accept that the values were not actually related to the theology (and sometimes were inconsistent with the theology).

I walked away from the Catholic Church 40 years ago after high school. I had only been going through the motions for years before that.

Their hatred of women is a complete turn off.