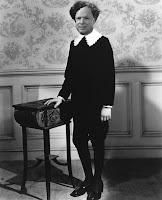 The skank queen of American political commentary (I didn't even have to name her, did I?) has been referring to the junior senator from Illinois as “B. Hussein Obama.” This is what passes for wit among the rabid right (and please excuse the redundancy of my saying “rabid right”; what else is there these days?). “Get ready for President Hussein,” she says.

A more appropriate venue for this inane name-calling would be a playground for spoiled-rotten toddlers (so, yes, perhaps we should expect it of Fox News), but instead it's degrading contemporary political discourse. One grows weary, but they're insistent on their little name games, spinning and puking their talking points.

Since they refuse to play nicely, shall we play along and push their faces into the sandbox? The name-game vulnerability is not solely on the Democratic side (oops! was I supposed to say “Democrat side”?). Let us consider the now-inevitable Republican nominee for president. Although the Obama-slamming pundette has equal disdain for the senator from Arizona, he is the obvious and irresistible target for retaliation-in-kind against the Republican slime machine. Everyone knows Sen. Obama's full name. Do you know McCain's?

It's John Sidney McCain III. That's right. Sidney. And the third. Can you imagine people waving banners exhorting the voters to support J. Sidney McCain III for president? (Can we get Thurston Howell III on the ticket as J. Sidney's running mate? It would be perfect!)

We are certain to hear plenty of GOP operatives and apologists smarmily pushing Barack Obama's middle name in our faces throughout the fall campaign. (I'm sure of it. Either he'll be the Democratic nominee or a barely-victorious Hillary Clinton will have to beg him to be her running mate. B. Hussein Obama will be on the national Democratic ticket.) Every time someone tries to make a big deal of Hussein, we can sweetly ask whether America is ready for an effete scion of the clenched-jaw set, J. Sidney the third.

Maybe it's really an implicit endorsement, sort of a "He's so great, the worst we can find about him is his middle name, so go vote for him!"

Perhaps it is a commentary on how much I dislike George W, but I find that I would be cheered by the thought of any of them (Sidney, Hussein or Hillary--does she have a middle name?) as the next president.

Agreed on the dislike of "W", which stands for "WHOLESALE govt spending" and "WELL on our WAY to socialism". Hillary has Billary and more of the same, B. Hussein has Sadam and an unprecedented liberal voting record, so How about John "72" McCain? That gives us a discrimination trifecta from which to choose. I simply can't be cheered this election year.

Lsquared: her middle name is "Rodham".

I'm amazed the mispronunciation potential and the accusations of unfeminineness haven't snuck off into a corner to make little propaganda babies.

I'm often oblivious, but I imagine conservative pundits pronouncing it "RODham" (as opposed to "Roddam", or somesuch) would generate a pretty strong reaction.