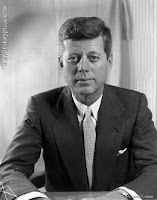 This morning the newspapers are full of headlines and speculation concerning today's political caucuses in the state of Iowa. These meetings mark the first substantive balloting and delegate selection in a presidential campaign that already seems like the longest in history. That's why it's interesting to think about what people were reading in their morning newspapers on January 3, 1960, nearly half a century ago.

The day before a young senator from Massachusetts had announced his candidacy for the Democratic nomination for President of the United States. John F. Kennedy's announcement wasn't exactly a surprise. He had been positioning himself for some time as a contender. Nevertheless, his first overt action as a candidate was his formal declaration of candidacy on January 2, 1960.

Imagine if today's presidential candidates had waited till January 2, 2008, to announce they were in the race. Too late! The selection and election process has grown into the elongated gantlet in which we are now immersed, a political marathon that exhausts the voters as much as it exhausts the candidates. It makes you nostalgic for the good old days.

Of course, those days were not very democratic. Many delegates to the nominating conventions were selected by political bosses and other purveyors of patronage. State primaries were relatively few. In most respects, the system we have today is more open, albeit chaotic and confusing. Still, I think we could do better.
Posted by Zeno at 10:30 AM

Well, what this country needs is more leaders like the the manager of the Darwin Finches.