The master of time 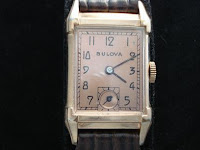 Who was I kidding?

My students don't wear wristwatches. They all carry cell phones instead, which display the time and make watches unnecessary. Who needs a watch when you're plugged into the great electronic web of modern life?

I started wearing a watch in high school in the 1960s. It was a gold-colored (though not gold) Bulova with a rectangular face. A separate little dial marked off the seconds. It was easier to watch the clock in school when you could look casually down at your desk instead of craning your neck to peek at the wall clock behind you.

The clocks in my high school were highly synchronized. All of them were wired to the master clock in the administration building. They clicked as one. Perhaps the master clock had a sweep second hand, but the classroom clocks did not. Every sixty seconds, they audibly clicked from one minute mark to the next minute mark. The alarm bells rang when the minute hands clicked into the position that marked the end of the class period. Each click of the clock was preceded by a minuscule backstroke of the big hand, as if the timepiece were anticipating its imminent move. If you were close enough to the clock to see the tiny backstroke, you had an instant's warning ahead of your classmates when it was time to bolt for the door.

My wristwatch was a wind-up, not electric or self-winding. I had discovered that the tiny sweep second hand would stop moving if I put just enough torque on the winding stem to engage the internal mechanisms (but not quite enough to begin winding the spring). Soon I was using that information each morning to ensure that my wristwatch was precisely in sync with the high school's master clock. Thereafter, for the rest of the day, I knew exactly when each class period would end. I was not lost during the final minute of each session, dependent on the premonitory backstroke to prime me for departure. Soon my neighboring classmates noticed that I was able to give a completely accurate countdown. No one else was in such precise sync and seldom did anyone else think to note in advance the position of the sweep second hand on his or her wristwatch when the classroom clock clicked. Only I could give a countdown with split-second NASA reliability (or tick it off with the fingers of my right hand if the room had grown too quiet to permit murmuring it aloud).

It was, I'm afraid, the coolest thing about me throughout high school.

One afternoon I commented to my classmate Dennis that it would be neat if we could just skip ahead to preferred points in time. Say, Friday afternoons. Dennis shook his head in firm disagreement: “Life would be too short that way.” 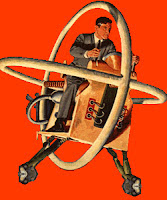 I realized that Dennis and I were not looking at things the same way. While I was thinking of operating like the Time Traveller conceived by H.G. Wells, jumping to discrete points in time, Dennis was contemplating the more mundane alternative of squandering the bulk of one's life by being too fussy about when one should “be in the moment.” Do you really want to fast-forward your life?

Dennis later became an insurance salesman. I should have seen that coming.

During my college years several astronauts went tramping about the moon. Well into her seventies at the time, my grandmother shook her head as she watched Apollo crews on television as they drove moon buggies across the lunar surface: “What are they doing up there?” she asked. “I think they've been greasing the world's axle. Every year goes by faster. I'm not sure that was a good idea.”

Grandma was kidding. But not really.

I was a Caltech undergraduate during part of the Apollo program. During my junior year I lived off campus and would walk to school along California Boulevard. As I moved past Sloan Lab toward the student houses, I would come to a metal plate in the sidewalk. For some reason, I fell into a pattern of avoiding it—except on Fridays, when I would step on it with a satisfying clang. I'd think, “It's Friday.” On Fridays I often caught the bus for a weekend trip home. It was convenient to have my laundry done and my meals served by Mom while I also took advantage of having a quiet place away from school where I could do my studying and my homework. But it was also my first year away at school and I was often intensely homesick. In Pasadena you were always surrounded by buildings. At home in Central California, most directions offered you a view of the horizon. Fridays were the day I escaped the oppressive metropolis.

But sometimes the clang of my feet on the metal panel reminded me of Dennis's warning. Do you really want to fast-forward your life?

Last week, on Christmas morning, I groped through the cabinet in Mom & Dad's bathroom and found the can of shaving cream. It's not Dad's brand, so he never touches it. Nevertheless, it gets pushed aside during the weeks I'm away, so I always have to hunt it down. It has an orange cap, although the one I have at home has a black cap. Same basic brand, though. The can at Mom & Dad's is more of a Time Traveller than I am. Its life has been artificially prolonged beyond its normal expectancy of a month or two of useful service. It can provide perhaps forty shaves. I'm not sure. Since I use it only five or six time a year, its existence could be stretched to as much as six or seven years. Will the can I used on the morning of my nephew's wedding three years ago be the same can I use years from now on the morning of a parent's funeral? Six-year jumps are pretty big leaps in one's life. There's no guarantee that I will even finish the can. My flesh crawls as I shave.

Time whacks us all up alongside the head and chuckles at our pretensions. Or would, if it could. I'm sure I'm just anthropomorphizing. Nevertheless, no one masters it. We may, however, continue a guerrilla campaign of resistance. Next time at Mom & Dad's I'm going to grab that orange-topped can and bring it home with me. And use it up.

Or, as TMBG put it in their brilliant little song:

But what I really want to know is, What is the scent of your shaving gel? Do shaving cream flavors have the same crazy names as men's deodorants, like Avalanche Blast or Extreme Rush or Rank Virility?

I'm too old to be amongst the majority of your students, and if I were in the professoriate still, I'd be a young one, and I don't wear a wristwatch, but neither do I carry a cellphone.

I have a watch that hangs from a clip from my beltloop. It's very ingeniously designed. It looks rather like a key-fob, because it has a leather case that goes over the watch itself and closes with a snap in the front. When you open it to look at the watch, what would be the "top" of the display is pointed towards the floor, so you can read it easily. It's also an analogue watch.

I like analogue watches because I suffer from the persistent delusion that digital minutes are bigger. I see "X:58" and think, "Lots of time," but I see that tiny little slice edging on towards the hour mark, and I get my butt in gear.

I also don't wear a wristwatch because there's something weird about my biochemistry, and my own sweat, trapped under a watchband, will eat away my skin until I have a big red-and-white hole in my wrist, if I'm not careful.

I'm still not going to buy a cellphone.

As a person who is not that many years younger than yourself, I am not sure if I find your musings regarding the elastic nature of time comforting, or troubling.