Sins of omission and commission

A pair of posts at Language Log reminds me that I have had my own close encounters of the innumerate kind when it comes to working with the concept of percentage. Some people find the notion of hundred-based fractions to be arcane in the extreme. You mean that 50% is the same as 50/100? And that's the same as 1/2? The brain explodes!

Bill Poser's Language Log post is about innumeracy among reading specialists—the folks who tell us if our children is learning to read. In the case cited by Poser, the specialists have to rely on a math crib sheet to work out the percentage changes—but the crib sheet is wrong. Are students' reading scores going up or down? It seems that no one knows.

Mark Liberman's post tells us about an on-line calculator that one can use to compute percentage change. (Someone please clue in those reading specialists!) Liberman saw a pitch to the community of public relations specialists that touted the on-line calculator as a way to avoid “feeling really old and decrepit.” (As we all know, the ability to compute percentages is one of the first things to go.) Imagine all those press releases put out by PR specialists. Can we trust any of the numbers in them? I would have said “no” in any case, but now it appears that even the PR people don't know if they're lying or not!

Years ago I was having lunch in downtown Sacramento with a friend who was working for a legislative tracking service. In those days it was still a growth business (before easy on-line access to legislative information wiped out most of those companies). He was looking around for a new position because his job satisfaction was exponentially declining toward zero. The latest straw had come in the form of a pay raise.

“The board of directors approved an across-the-board increase of 10% in the compensation package for employees in my unit.”

“It turns out, though, that I'm only getting one percent.”

“Beg pardon? That doesn't make much sense. Does your manager have it in for you?”

“Oh, no. She likes me just fine, although I do have some issues with the assistant manager. No, the manager was told she had discretion in actually implementing the pay increases. That's the problem. She was told she could go up to ten percent, depending on merit, and she doesn't understand percentages.”

“I'm still not following. If she can go up to ten and she gave you only one, she must not appreciate your work.”

“Well, this is the ‘good’ part. She thinks that the increases she awards have to add up to ten. I got one percent. Another guy got one half. The biggest increase she gave was two and a half to her assistant manager. There are seven people in our unit and she doled out increases that ‘add up’ to ten.”

“Don't yell at me! I explained that to her several times. Or tried to. I'm in a bit of dutch with her right now because she thought I was trying to trick her into going way over budget. I have got to get a job working with smarter people!” 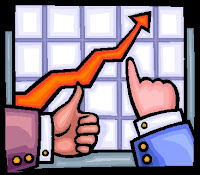 A few years ago I had occasion to investigate property management companies to find out about their services and their rates. A realtor of my acquaintance recommended a company, telling me it retained 8% of the rent it collected on any property it managed, passing on 92% (less repair and maintenance expenses) to the property owner. I dropped by the company's local office to pick up the management contract and verify the rate.

The desk clerk cheerfully informed me that the company was now charging a 10% management fee.

“That's a pretty significant hike over what you were charging recently. Didn't it used to be 8%?”

“Yes, you're right,” she agreed. “But rents and costs kept going up, so we had to increase our rates.”

“But your rate is a percentage. Your revenues automatically go up in step with rents. And costs tend to keep pace with rents, right?”

I decided to visit a different property management company.

A friend of mine was working in the home remodeling business, earning his income on a commission basis. One day he dropped in at the central office to pick up his paycheck and to touch base. The office administrator clucked her tongue at him and chided him gently:

“Robert is bringing in way more leads than you. People are noticing.”

“Leads don't matter. Sales do. How many of Robert's leads are turning into sales?”

“No, it's more than one in ten. It's actually one-point-two in ten. Or twelve percent, if you prefer.”

“Wow! How did you do that? Anyway, it's pretty good. Robert's bringing in a lot more leads than you.”

“If you look at the numbers, you'll see that I brought in 64 leads last month and we closed on 22 of them. My closing rate is over 33%. And I'm outselling Robert in absolute numbers, too. That's saying nothing, by the way, about the time the company wastes in trying to close bad leads. I bring in good leads.”

“Well, I guess. But they've noticed how Robert brings in a lot more leads than you.”

My friend doesn't work for them anymore.
Posted by Zeno at 12:30 PM

Granted, but percentages are also tricky in non-intuitive ways: reduce a value by 50% then increase by 50% and you don't get what you started with. Ask someone to multiply a number by four, and they can answer pretty accurately, but ask to compute a 300% increase in a value and you'll get a wide range of responses. Why require the extra mapping from "300%" to "4x" in the first place?

Anonymous, I would cry hot tears of joy if those were the questions our students were asking (instead of things like "How can I find 50% of 40?"). In most cases, we're not talking about anything except the most basic of basics.

I'd say that first anecdote isn't so much about not understanding percentages as it is about understanding the phrase "across the board". If you're not familiar with the phrase you could easily interpret it to mean "spread out among."

>If you're not familiar with the phrase you could easily interpret it to mean "spread out among."

Anonymous, I am sorry but you are making the same mistake that the anecdote is highlighting!

An example: say a firm has 10 employees, each makes $1000 a week. [for simplicity assume that they are all paid the same initial salary]. The management authorizes a 10% raise, to be *spread out among* the 10 employees. This means that it is authorizing the wage bill for the whole department to increase by 10%, namely from 10000 to 11000 dollars. This means that the department can now pay, for instance, two employees $1500 a week, while the remaing 8 keep their old salary. So two employees get 50% raises, the rest 0%...This is spreading the raise among the employees, but *it has nothing to do* with increasing the salaries so that *the sum of the percent increases* (a quantity that has, in itself, no mathematical meaning) equals 10. (indeed, the -again, meaningless- sum of the percent increases in 100!)

It's times like this that I truly appreciate working in an anesthesiology department where everyone (including the boss who gives me the pay rises) can pretty much do long division in their heads...

The truly mental thing about the "percentage raise spread out" is that presumably not all people in the department made the same salary, so the woman was getting into budgetary hell by having to figure out sub-percentages of different salaries, what those increases would mean in real numbers, and then arrive -- almost inevitably -- at the horrible conclusion that that total increase would NOT be a 10% increase in her total salary budget...

The innumeracy hurts my brain. Please make it stop.

One of the barbarians, I teach in the humanities. I compute my students final grades according to a weighted average. Several of my colleagues think I practice black magic, because I can make six short-essays each graded out of 25 points equal 30% of the final class grade.

To share another anecdote, I had a colleague who couldn't handle anything more complicated that addition and subtraction. So he graded on a strait point-based system. I suppose there is nothing wrong with have 1317 points possible in a course. But it strikes me as just wrong. Of course, he was better off than his students who couldn't figure out how much of their final grade an assignment worth 37 points was worth.

I remember when my city government justified a tax rate increase because of inflation. "Everything else has gone up, except taxes!"