The time of red and green

Not what you think

Colors carry associations, reminding people of different events or occasions. Red and green carry some particularly idiosyncratic associations for me, and I'm not talking about the traditional season of Yuletide. It's a weird story, which some people have difficulty crediting, but I swear it's as true as my recollection allows. In this instance, my recollection is vivid.

I was in high school in the sixties. The sixties are remembered today (with some admitted difficulty by many who lived through them) as a period of dramatic change. It was a time of transition and social upheaval. One small aspect of this upheaval took place in my hometown in central California, when revolution struck the high school P.E. department. 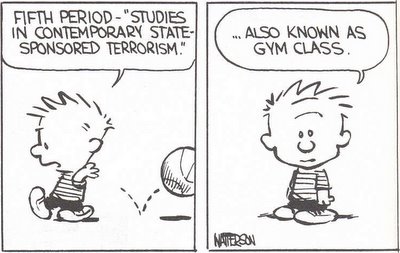 The ancien régime that ruled over high school physical education classes embodied a perfect caste system. The coaches operated a tracking system that classified people by physical attainments, not grade level. Twice a year (as I recall) we went through the humbling, sometimes humiliating, ranking process. The coaches eagerly put us through our paces, winnowing each new crop of students, separating the wheat from the chaff. As the scores in various physical tests were tallied, our fates were determined for the balance of the school term. And our fates were embodied in a visible emblem: the color of our gym trunks.

The students in our P.E. classes were assigned colors to represent the height (or depth) of our physical fitness. Red was a kind of least denominator classification. Everyone started with red trunks. The optimistic boys would get only a single pair, knowing they wouldn't have time to wear them out before ascending to the next level. Blue trunks signified that one had outstripped the mundane and risen above the crowd. Blue was a sign of distinction. Still, blue represented the minor nobility in our feudal society. Gold trunks were more desirable. Gold showed that you had really arrived and had achieved a level of athletic performance that would qualify you as coach's pet. Would qualify you. If the position had not already been filled.

The real coach's pets wore white satin trunks. You think I'm kidding, but I'm not. White satin. These boys were the ne plus ultra of high school P.E. The white satin boys shared a few essential characteristics. For one thing, they did not know how to operate a T-shirt. Yes, T-shirts were part of the standard P.E. uniform, but white satin boys evidently could not figure out how to put them on. The coaches kindly looked the other way. (Actually, some of the coaches didn't look the other way at all, but let's not read too much into that, shall we?) The white satin boys had impaired vision, too, because they kept bumping into other P.E. students. I suspect their hearing was bad also, since they never reacted to the angry cries from those they knocked down. Naturally I was often perplexed that such fine physical specimens were impaired in so many of their senses. (I was not, however, in the least bit surprised that none of them were in my college prep courses, although I imagine some of them ended up in college anyway via the athletic scholarship route.)

Our P.E. rainbow was not limited to the red-blue-gold-white satin spectrum. There was also green. Green happened to be one of our school colors, but green was not a happy color in P.E. Rather, green was used to signify those who were not even worthy of the lowly red. That's right. There were certain minimum qualifications during the classification trials if one was going to be permitted to retain the generic red trunks. If you failed, you were required to suit out in green. This was exceedingly efficient, as it made it all too apparent which boys were available for recreational abuse. If a green complained to a coach, the coach would patiently explain to the green why it was the green's fault for getting in the way of a physically fit student (who might have been running, or jumping, or swinging his fist, for example).

Lest you feel pangs of sympathy for me, intuiting that I know the green experience myself, let me disabuse you. I never dropped below red. Sure, I was a nerd rather than a jock (those terms weren't much used yet), but I was a country boy who routinely wrangled hay bales on a dairy farm to feed a couple hundred head of milk cattle. (Those bales outweighed me in those days.) I could do the pull-ups, sit-ups, etcetera, necessary to hang on to my red rank. In fact, I hit blue on a couple of categories and managed white satin status on the bar hang (though what an ability to hang inert from a bar really has to do with fitness, I don't know; sure was good at it, though). That was handy because a couple of blue scores could be used to cancel a couple of green scores (I couldn't do a bar-dip to save my life) and retain red status.

The end came abruptly in my junior year. The color system was suddenly scrapped and replaced with a class system. Students now took freshman, sophomore, junior, or senior physical education. I'm not sure how it came to pass, but it was a happy moment for the reds and greens. Whether the principal or the school board was the driving force, I cannot say, but whoever it was also decreed a new standard for our P.E. uniforms. Everyone was henceforth to wear green. It was, after all, one of the school colors.

The P.E. coaches were broken men after the color line was shattered. No doubt my memory exaggerates this aspect. After all, I had few sympathies for the coaches and actually disdained most of them (the ones with highly convex beer guts hanging over the waistbands of their gym shorts). The elite corps of white satin boys was gone, either blended into the new polyglot classes (no doubt with remedial training in the operation of T-shirts) or institutionalized for treatment of anxiety disorders. High school physical education became a less stressful hour of the day (although I still would have preferred to do without it) and it was interesting the degree to which the greens were able to vanish into the ranks of the general population. With rare exceptions, there were no dramatically clumsy standouts that reminded us daily of their green status in previous semesters. And for those few exceptions, there was no longer any point in denouncing them as "greens", for that's what all of us were wearing now. A glorious new age of égalité had begun.