Judge Jones has rendered his decision in the Kitzmiller v. Dover Area School District case. Many megabytes of commentary have already hit the Web. Some good entry points to the discussion include Pharyngula, where PZ Myers has linked to other sources (both pro, especially The Questionable Authority, and con) as well as offering his own perspective, and The Panda's Thumb, where Warren Elsberry compiled an extensive overview during the entire court process. These sources are replete with informed opinions by scientists and attorneys who share their professional perspectives on the matters of science and law which Kitzmiller had to straighten out—and did.

Since my field is neither evolutionary biology nor law, I have little more than a layman's point of view on the whole matter. One thing that caught my attention, however, was the unfortunate inability of some news media to do justice to the controversy or Judge Jones's incisive opinion. The leading—or at least most visible—offender is the Associated Press, whose wire service report on Kitzmiller was widely disseminated and published by AP subscribers. AP staff writer Martha Raffaele wrote, "A federal judge ruled Tuesday that 'intelligent design' cannot be mentioned in biology classes." That is definitely not what the judge said, although the AP article provides fodder for those who want to cry "censorship" and portray themselves as martyrs in the cause of the free exchange of ideas. (I was pleased to note that some news outlets rewrote the lead paragraph when running Raffaele's article to eliminate the misleading "cannot be mentioned" phrase.)

Judge Jones ruled that intelligent design is—if you'll excuse the expression—designed to advance the religion-based notion of creationism. It thus violates the Establishment Clause of the U.S. Constitution for a public school to teach it as an alternative scientific theory. In his own words, after commenting that he was not denigrating the sincerity of intelligent design proponents, Judge Jones said

Nor do we controvert that ID should continue to be studied, debated, and discussed. As stated, our conclusion today is that it is unconstitutional to teach ID as an alternative to evolution in a public school science classroom.

Thus ID can even be discussed in a science classroom. It probably will be, too, especially in the wake of the headline news occasioned by the Kitzmiller lawsuit, but ID will not be taught as science. Because it is not. "We don't know what happened, so God did it" is not a scientific theory, even if its proponents hide God behind the phrase "intelligent cause." Burt Humburg and Ed Brayton documented with great clarity the fact that the authors of the recommended ID "science" text Of Pandas and People merely replaced the word "creationism" with the phrase "intelligent design" during the final revision of its manuscript. Science it's not.

My final comment is a celebration of Judge Jones's clear statement (on p. 71 of his decision) concerning one of the fundamentally illogical underpinnings of the antievolution crusade:

ID is at bottom premised upon a false dichotomy, namely, that to the extent evolutionary theory is discredited, ID is confirmed.

This is the exact point I stressed in The Sign of the Fraud, my earlier post on the peculiarly Holmesian approach adopted by ID advocates ("[W]hen you have eliminated the impossible whatever remains, however improbable, must be the truth... ").

Logic is as much the enemy of ID as is science. 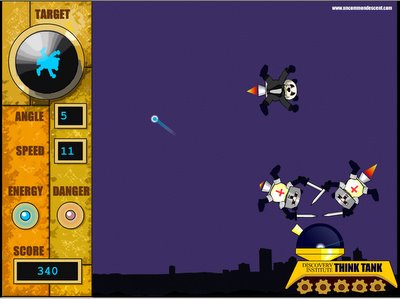 A screenshot of the Discovery Institute's Think Tank (a.k.a. The Amazing DembskiDozer) about to be destroyed by anti-ID panda warriors during a game of Panda-monium. The crusader pandas say "Intelligent design is an attempt by the religious right to establish a theocracy. Oh, no!" and the formally dressed panda says "Intelligent design is just creationism is a cheap tuxedo." For reasons known only to the IDists, the anti-ID pandas always win. (Perhaps it's because the keyboard controls for the Think Tank and its weapon are poorly designed.)
Posted by Zeno at 11:10 AM