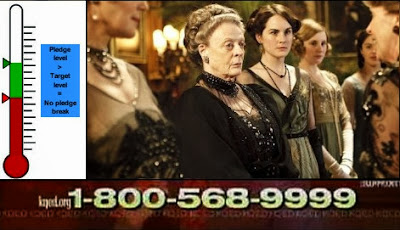 That was a very nice "donation" to public TV, Zeno, a valuable tip for a New Year's resolution. I read it as if it were an Andy Rooney rant, only done with style and grace!

Your idea of having uninterrupted shows with the overlay of the pledge thermometer sounds good to me. They could even make it a tougher pitch by having the program start to fade away if the pledge dollars aren't kept above the line. Would add a touch of the whip to the pledge request (as if that would ever work).

It really is strange to me how so much of the "special programming" the last few years is stuff that would otherwise seem more appropriate for an infomercial. Does this really bring in donations? Why?

The one that annoys me - more common on the radio - is the "matching pledge". Why doesn't the matcher just give the money? Why make it dependent on me?

What a bunch of innocents!

Both public radio and TV long ago hired consultants to optimize their fundraising. They take the sensitivities of their dyed-in-the-wool donors for granted because they know that most of those folks will keep on contributing anyhow. The goal is to attract wavering-on-the-fence, lapsed and especially NEW donors, in order to build a larger support base (in hopes that at least a few of them will someday become more generous donors).

The "matching grant" IS money that's already donated; donors won't be withdrawing it if the pledge isn’t matched. They've been asked by station development staff beforehand if they'd consent to let their names be used for that ploy. If someone were to phone in during a pledge period offering an unsolicited matching grant, station management would either faint dead-away in shock or at least be very wary and double- and triple-check to see if the offer was legit.

When you hear a public radio announcer tell you a few minutes before the hour that they only need X number of pledges to meet that hour's goal, didn't you ever wonder why it's so rare that a matching pledge doesn't reach its goal, and how so many miraculously pour in during the last couple minutes of each hour? Quite often they've already met that hour’s goal, but don’t enter the pledges that put them over the top into the computer yet -- but they sure as heck aren't going to say they’ve met the hour’s goal over the air because that might disincentivize a potential donor.

Re TV fundraising: Extensive xonsumer research has been done over the decades on optimal lengths of programming segments and pledge breaks, as well as their content. Both public radio and TV use strategies, tactics and scripts that have been fine-tuned by researchers to maximize donor numbers. Nothing is left to chance any more (the quirky way pledge breaks used to be in the early days, back in the early '70s). Few viewer/listeners pledge while programming is on air, because they’re listening to or watching it; they wait till the pledge break so they won't miss the show. And research has shown that the optimal length for such a break is at least 10 minutes, because at minimum most people need that much time or more in order to get motivated and overcome inertia in order to go to the phone or computer in order to pledge.

Finally, if a “white knight” were to come along and single-handedly donate all the money that a station needed for an entire pledge period in hopes of ending the pledge period ASAP, it would be considered catastrophic (and turned down) -- because the ultimate goal is to get AS MANY DONOR NAMES as possible while raising the money, so those folks can cultivated for future (preferably larger) contributions.

Also: my PBS station in Maryland tried doing a very low-key pledge drive one year, no interruptions, no interminable chats in front of the phone banks ... and they didn't get as much money as they usually did. These drives work.

Valid point, Ridger. The time-tested, more annoying methods yield the biggest bang for the buck, i.e., best ratio of return for the expense involved in the effort -- which is a desirable quality in any organization's fundraising efforts.

Broadcast TV hasn't fit into my life for a few years but it sounds like PBS fundraising hasn't changed at all.

I have heard an innovation on public radio, however. WYPR ("Your Public Radio") in Baltimore has a "shorten the drive" campaign. For a few weeks prior to the pledge drive, the announcers politely announce for maybe 45 seconds every half hour that for every $50,000 they raise before the dreaded pledge week, they will take a day off the pledge drive. We (I include myself) usually manage to hsorten the pledge drive by 1 or 2 days.

To be sure, on those "saved" days, they hector us every half hour to send in our pledges but the whole thing is so much more civilized than the pledge drive days.

Disturbingly, it's six of one, a half-dozen of the other. The weeks of low-key hectoring can be worse than an added day of full-bore pledge (cf. band-aid removal techniques).

I avoid fundraising periods almost entirely by listening to our neighboring state's NPR when our local station is in pledge, which but for one or two days a year don't overlap with the local station's!

Despite the fact that Kathie undoubtedly has a depressing amount of truth on her side, I find it difficult to believe (in fact, impossible to believe) that the best market research in the world has concluded that the pledge-drive fundraising system must also be painfully boring and stupid and aggravating.

I think we can agree that it is a matter of taste. I much prefer six of the one to the half dozen of the other.

I get to cheat as well with the radio station out of Washington, DC. I can get both Baltimore and DC across most of the region. Their fundraising drives never overlap. In fact, there seems to be a 1-2 week interlude between their drives. I assume that isn't mere coincidence but that they found they each take in more money if they aren't both asking at the same time. Although I have often wondered about that -- what if they gave us no escape for one week each spring and fall?

What raises the necessary money from the most donors with the least expense is the method that prevails. See Ridger's comment above.

Plus, if the fundraising break weren't sufficiently boring, people would be less eager to get up from the couch to phone in their pledge. Please trust me on this, consultants have studied these things in great depth and those performing the pledge breaks are expected to follow strict protocols that yield tested results. Yes, it's depressing, I realize.