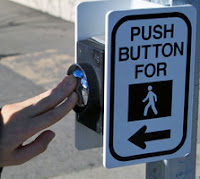 There is a big intersection near the post office in my town. It has multiple lanes, including turn lanes, and stop lights and crosswalks and buttons for pedestrians to press when they want to cross. Yesterday I was stopped at the light, waiting for it to turn. Two teenage girls on roller skates were on my right, fidgeting as they waited to use the crosswalk in front of me. The blonde was pumping the crosswalk button. If one press is good, won't a dozen presses be better?

Having done her duty, the blonde shuffled on her skates while keeping a keen eye on the Walk/Don't Walk sign. Just to be safe, however, the brunette scooted over and pressed the button several more times, presumably in case her blonde friend had not done it correctly. It was a busy intersection that morning and they were not getting instant gratification, so the blonde skated around the light pole and mashed the button again a few more times, pumping it with great vigor.

At last the lights changed, but it was to allow a pair of turn lanes to empty out and the Walk sign did not light up. The blonde's mouth opened in astonishment and she reacted as if she had been slapped in the face. Outrage! And banged the button a dozen times, pumping it in a fury.

The turn lanes emptied, the lights changed, and the girls were at last given the green light to skate across the crosswalk. Their mission was evidently only half accomplished, because they had wanted to reach the diagonally opposite corner and had one more crosswalk to navigate. Hence they began to take turns assaulting another crosswalk button.

They must be a barrel of fun in elevator lobbies.
Posted by Zeno at 9:00 AM

They have my complete sympathy. The request walk button thing is just another example of bad design. At least the signage should explain that the only reason it exists is because they assume that no one would ever want to cross, and if one doesn't press it, one will never get a walk light. This is not obvious.

For most people, the walk button is as useful as the close door button on an elevator. I heard one guy pressed it once and the door closed. He died of a heart attack.

To be fair to neglected pedestrians, those buttons are much more helpful when they have a light on them that glows after you've pressed the button, so there's evidence of your having done so. Otherwise, people and especially impatient kids don't know if their push really did the trick. And they have to wait 3 or 4 minutes to find out.

Of course, there's also the suspicion I have - and maybe those kids, too - that those crosswalk buttons have elegant fuzzy logic built into them. With one press of the button, it barely looks up from its morning paper. But start playing whack-a-mole on the button, and it takes notice!

There's one large intersection in my area that has stoplights with turn lanes, etc, but NO crosswalk buttons. So there's no way for a pedestrian to request the chance to walk across the street. I'm curious if that was a mistake or part of a fiendish plan.

@Kalegerg: You might be interested to know that in Japan, the "close door" buttons on elevators generally are effective, and people use them. They'll look at you kind of funny if you don't, and then reach around you to press it.

At least in Nagoya, our "push to cross" buttons also do have light-up windows that indicate they have been pressed. A few even have signs saying at what times of day they should be pressed.

Miki, I don't know if it's something specific to impatient Americans, but light-up buttons get pressed even when they're already lit up. I see this frequently in elevator lobbies: You've pressed the Up button, it's lit up, someone else joins you, and he or she presses the Up button again. Just to be certain, I guess. One marvels at the wasted effort. (Maybe if the second push turned off the button and its light, people might learn better, but I doubt it.)