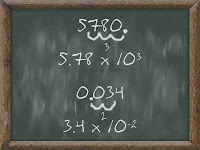 How can you stand it, Zeno?

Indeed, Tualha. I discern a few different factors at work. (1) The "teaching to the test" environment that dominates many elementary and high schools has programmed our students to become "narrow" learners. (2) When you're teaching the equivalent of high school algebra at the college level, you have to expect a fair number of underachievers in your class. (3) I may have more colleagues than is optimal who give "template" exams for students who demand fill-in-the-blank problems, abetting the "narrow" learners and exacerbating the situation.

I'm not from America (and not an English speaker either, so please pardon any errors).

I was under the impression that in America, college came after high school. Your students have high school diplomas, and they don't know about scientific notation (to say nothing of not recognizing a problem involving multiplication)? I am honestly confused.

Your comment about "template" exams and narrow learning only adds to my questions. Are there no "long form" exams that require students to exhibit problem-solving capabilities and communicate their solutions in both written and oral form?

And yet... appropriate. Unless Z is teaching a special needs class, certain fundamentals are a reasonable expectation.

I offer no apology for my low opinion of "students", all presumably at least 18 years old, all of whom have either graduated from secondary school or passed the GED, who have enrolled in a college -- and who think as poorly as demonstrated by this story.

I think the students exemplified here are only in college to acquire that magical piece of paper that automatically leads to a professional career and high earnings -- not to, you know, learn anything, or develop any skills, such as reasoning. They don't see a grade as a reflection of how well they've understood the material. It's a meaningless letter, and if you get enough of the right meaningless letters, you get that magical piece of paper and can put those magical words on your resume, and get that better job -- for which you'll then be completely unprepared.

Feynman's essay on cargo cult science comes to mind. They're just going through the motions.

I teach English, and students expect me to tell them what page every reading assignment is on. They seem surprised when I point them to the table of contents and index.

My account relates to a class that was unusually weak, given that it was an accelerated algebra course and one I had taught with great success in other semesters. In part, I think the problem was a reduction in the promotional campaign (posters, etc.) to attract the right students to it. In this instance, I got too many students looking for a "quickie" course instead of a challenging course. I never had so much expectation of solicitous hand-holding as with this group.

Tualha, yes, you should apologize. Zeno's job in a course like this is not only to teach students the subject matter, but to teach them how to learn it. Admittedly this can be frustrating at times due to inadequate student preparation in both the subject and learning skills, but his job is to provide remediation on both levels -- and with skill and persistence he'll succeed in getting through to at least some of them.

I get a factor of 10^6 kg. Enough protons that if I streamed them out at .25 times the speed of light I could obliterate any enemy spaceship. Ships a quarter a light year away would have their crews killed by breaking radiation even accounting for electrostatic bloom. This many protons is pure death.

Yes, Bacopa, it is not recommended that you keep that many protons in your pocket. That would be ill-advised.

The youngest Openminded -- 7th grader -- is taking Algebra I and displaying the same behavior Zeno describes. I was wondering if she wasn't mature enough to grasp the abstract nature of the material. Zeno's anecdote undercuts that interpretation.

I've been doing supplemental problem sets with her all year if I wasn't persuaded that she understood the concept from school(see "all year"). Another thing that has driven me to distraction is how she seems to forget concepts that I thought had been mastered. (Me: "Sweetie, you have to add 8x to BOTH sides of the equation." Her: "Oh, yeaaahhhh.")

Her thinking seems compartmentalized somehow. I hate to think that this could continue all the through high school. And yet Zeno's class is Exhibit A that it could.

Also, I got smacked down by her teacher recently. I had shown her how to solve a problem in 3 steps instead of the cumbersome 97-step process her teacher was using. She got marked down for using the "wrong" process (yes, yes, the answer was correct). Ms "R": "Tell your father I want you do these problems the way I showed you."

Sigh, not a battle I want to fight. Ms. R has been very helpful overall but I would be more supportive of her process if I didn't feel the need to supplement my daughter's math education week in and week out.

I get stuff like that all the time. I tell them that a mole is 6.02 x 10^23 particles, and ask them how many particles are in 5 moles. They give me a look like I've asked them to calculate the cube root of Avogadro's number in their head. So I ask them, by analogy, how many eggs are in five dozen. Simple- 60 eggs! How did you calculate that, I ask. I dunno- I just knew it.

So I explain that they mentally multiplied 12 eggs per dozen by 5 dozen, to get 60 eggs. Now a mole is similar, except instead of twelve eggs, you've got 6.02e+23 particles. Aha! they say.

Next assignment- "How many particles are in 5 moles?"

Keep in mind that I do realize that my particle death ray after obliterating my enemy's spacecraft will take a year to cross a full 1/4 LY sector.

Conversations might go like this. "Why can't we just get the from Zaxtron?" "Dangerous move, dude. One of Emperor Bacopa's ships fired its proton blaster at the other end of that sector almost a year ago. You wanna risk that? Zaxtron didn't. 3/4ths of their population bugged out."

No no no, you can't expect the fundamentals. Most students don't know fractions, or exponents or so many things. I would give all my students a grade level placement exam. They would generally score as fifth grade. We would fill the holes in their basic knowledge and it made algebra much easier.

This Slate article is relevant, and not just to math:
http://www.slate.com/articles/technology/future_tense/2012/06/math_learning_software_and_other_technology_are_hurting_education_.single.html

The technological advances of the last 40 years have changed students into religious zealots who believe that the calculator is a god. Consequently, many do not have the ability to think mathematically; they rely on the calculator to solve problems rather than to give numeric results that may or may not be relevant to the problem.

On exams my general chemistry students are permitted a $10 single-line scientific calculator (TI-36, TI-30xa, etc.), nothing more advanced. Their math ability is so poor that about half of those who enroll have trouble solving problems even with such a calculator. They pay no attention to the order of operations, they don't know that one-third is 0.333..., they can't solve t = 0.693/k for k without paper and pencil, some will multiply 2x by 2x and get 4x... or just 4.... They can't even mentally divide a given number by 100! Many of these students are planning to be doctors, dentists, veterinarians...

The "half of those who enroll" isn't an exaggeration. About 1/3 of the initial enrollment does not pass with a satisfactory (A, B, C) grade. The comparatively-good news is that the MDs, DMDs, DVMs will come from the few who actually understand math and science.

Wholeheartedly second Chris' comment, "The funnest part of teaching for me was getting kids over their learned helplessness."

Would just add that for all the palaver about the pros and cons of enhancing kids' self-esteem, this was the best way I knew how -- because students achieved something actually worth feeling good about themselves!