No royal road to algebra

Although its hours have been trimmed by the current state budget crisis, my college's Tutoring Center continues to serve as a lifeline for many of our students. Each semester, therefore, I make a point of ensuring that my math students are aware of the facility's existence. I don't just tell them, I show them. Thus it was once again that, during the second week of the semester, I gathered up the entire class and took them on a “field trip.”

It puzzled my students when I announced it, of course. I told them to leave their books and papers behind in the classroom, which I would lock behind them. We would take a few minutes to stroll down the sidewalk to the Tutoring Center, which was only a couple of buildings over. Short field trip. Once I mentioned where we were going, some students nodded their heads in comprehension, grasping my purpose. Other students, however, had a different reaction.

One came up to me, backpack in hand, clearly ready to make a break for it.

“Is this required?” he inquired.

“We're all going to the Tutoring Center,” I said, in oblique response.

“Yeah, but do we have to? Is it an assignment?” He was nothing if not persistent.

“We're all going to the Tutoring Center and we'll be back in a few minutes to start on the next topic,” I said, demonstrating a charming obtuseness.

I don't think my student was charmed. He got to the point.

“Does this affect our grade? Are we getting participation points?” he asked.

I looked right at him, allowing my surprise to show.

“‘Participation points’? In a college class?” 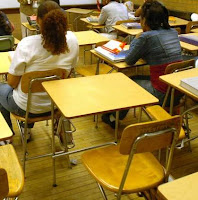 He fell silent but unrepentant. He wanted points if he was going to go to the Tutoring Center with his classmates. It was finally obvious I wasn't giving any. He trailed along behind the rest of the group and I expected him to lag increasingly until he took a “wrong turn” and vanished toward the parking lot.  I was thus mildly surprised and pleased to see that instead he stuck it out and hung at the periphery of the group as I introduced them to the instructional assistant who managed the math tutors in the Center and walked everyone over to the area where drop-in tutoring occurred. Now that my students had been physically present in the facility and had met the key personnel, I figured it was much more likely that they would feel comfortable about returning to it when they needed help.

We returned to our classroom and launched into the lesson for the second half of the class period. The point-grubbing student sat quietly in the back, apparently ruing his decision not to skip out. At least I assume so, since in the next few days he developed a habit of nonattendance or early departure. When our first exam came along, he achieved the class's low score, missing a D by several points. (In fact, his score in the thirties might reasonably be characterized as an F-minus-minus.) He had never come to my office hours and he had never darkened the door of the Tutoring Center again.

I guess he really needed those participation points.
Posted by Zeno at 4:00 PM

While taking undergrad classes to meet requirements for graduate classes as I pursued my M.S. Geology, I encountered one of the most fun field trips I've ever taken -- all within three or four blocks of my school, San Jose State University! For those unfamiliar with the location, SJSU is adjacent to downtown San Jose, where they cover buildings with veneers of what can only be described as a petrologist's dream. An hour's comfortable walk had those of us interested engaged in all sorts of geologic discussions about the rocks that made up those veneers, and the conditions that produced them.

Well, that was half the class. The other half disappeared somewhere along the way. Sigh.