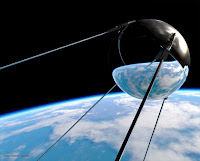 We have been treated to a fascinating spate of right-wing commentary on President Obama's state of the union speech. Former half-term governor of Alaska, Sarah Palin, used an interview with Greta Van Susternen (on Fox, of course—the only media she's permitted to appear on) to inform us that it was inappropriate for the president to cite Sputnik. After all, the Soviet Union won the space race, you know. (Unless, of course, you're intelligent and informed—and therefore not part of Palin's key demographic.)

I already knew about Obama's major faux pas since I had caught a few choice minutes of KSFO talk radio on the morning after the speech. Low-rent talk show host Brian Sussman—who replaced the high-priced Lee Rodgers in an economy move—babbled cheerfully with sidekick Officer Vic:


Brian Sussman: So you had Obama giving references to Sputnik. Okay, come on. This was a Russian spacecraft in 1957. Okay. Case in point, Obama went after the young voter to get elected. Right?

Sussman: Okay, there's a young voter in the room right now with us. Young Katie's here.

Sussman: Katie's going to be helping us out next week with some news and stuff.

Vic: You should pop on the mike there, Katie.

Sussman: Okay, so Katie, here's my point to you. Here you are, young person, right in Obama's prime demographic, and when he talks about Sputnik—that we need to have our “Sputnik moment” in America—did you have any idea what he was talking about?

Katie has a throaty contralto voice that suggests she has a bright future as a Coulter clone, as well as the forgivable ignorance of sweet youth. Her older-but-not-wiser radio companions pressed the Sputnik issue.

Sussman: When you think of the word “Sputnik,” what comes to your mind?

Katie: For some reason, a potato.

Sussman: We need to have our potato moment!

Vic: That would be “Spudnik”!

Katie: I had trouble relating to anything he was saying, though.

Sussman: Well, I'm just wondering how many people were turned off by the Sputnik thing.

Sussman was born in the year before Sputnik's launch. By the time he got to school, science and math curriculum had been revamped in the post-Sputnik furor. Despite his first-hand experience of growing up in the Space Age and the nature of his profession as political commentator, Sussman confesses that he knows nothing about Sputnik or the shock it delivered to American society. He's too young, of course, to remember having stood outside to look up at the “red star” arcing through the night sky over our heads, but the impact of this epochal event echoed down the decades.

But never in Brian's head, despite the excellent acoustics it must provide.

Idiot America doesn't need history or book-learning or context or even accurate memories. It cramps their style. No problem, though, if they listen to KSFO. It's media tailored to the needs of moron-Americans. 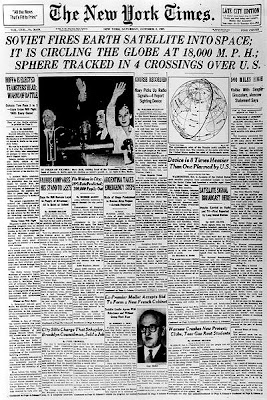 If they didn't see it, it didn't happen. Life is easier that way.

It's even worse than that. You know where "Spudnik" came from?

An episode of "Friends".

For Halloween, Ross dressed up as a potato with antennae, and no one got the joke.

And don't forget that fabulous
"The Sound of the City" signature jingle (which Wikipedia lists as "written by Johnny Mann and sung a cappella by the University of California Men's Octet").

Little curve here: "Sputnik moment" was one of the lower points of the speech.

I don't think we are at a Sputnik moment at all. PISA and TIMSS have been badly misread, and the wrong conclusions are being drawn.

Then again, as a teacher, I found most of the SOTU that related to education to be wrong.

I'm agnostic as to whether Sputnik was a useful metaphor to invoke in the speech, but I am endlessly fascinated at the ignorance of those who didn't get it at all yet feel free to comment at length about it. (I guess looking things up is too complicated for people like Palin and Sussman.)

Another interesting point to consider is the NYT front page from 1957, which seems to consist mainly of a lot of text. My morning paper, while still being considered high-brow (as such things go), these days seems to have more than half the page area used by photographs. I’m not convinced that this is based on carefully thought-out methods of how to convey a maximum of useful information to the reader/viewer.

"If they didn't see it, it didn't happen. Life is easier that way."

Funny that. I'dn't have expected them to deny the Resurrection.

Mark, when Palin referenced both the "Sputnik moment" and Spudnut donuts in the same speech, I had that exact same reaction as you -- flashing back to Ross in his "Spud-nik" costume for Hallowe'en, Great minds and all that, I suppose :-)

Great post, Zeno. I don't mean to brag, but Palin's reference to "a Spudnut moment" refers to the Spudnut donut shop in Richland, WA, the town where Palin has relatives and visits occasionally, and also the town WHERE I LIVE. Hah! Which must mean that both Palin and I have eaten donuts in the same shop. Okay, now that's bragging.

What was especially funny in Palin's attempt at political commentary was her boosting of and boasting about that independent, family-owned, non-bailed out 60-year old donut shop. Except a huge number of the customers at Spudnut work at the Hanford site, the largest environmental cleanup site in the nation, owned and paid for the by the federal government.

Hanford was built as the plutonium production plant for the Manhattan Project, and has been a 65-year long boon to the local economy. No, not just a boon, it's been most of the local economy and still is. The Spudnut shop's cash register is therefore full of government money. That's not a bad thing, and they're a very nice shop, it's just a fact that should be included in the discussion (which might be too big of a word for describing Palin's headline-grabbing utterances).

So, Gene, is there a Spudnut shrine (like a transparent plastic cake keeper) displaying a doughnut missing a Palin-sized bite? Have you run your hands over it? ;-)

That is depressing. I'm not into history but the first human-made object to orbit Earth ought to be damn memorable, let alone the impact it had on our country and the fact that it was a mere six decades ago.

It sure says a lot about American ignorance of science.

I liked hearing Palin link Sputnik with the economic collapse of the USSR.

Had to laugh at the image conjured by your last comment, Zeno. Cousin Eddie from Xmas Vacation reverently caressing the doughnut case.

I agree with Cody, too. Very depressing that such a true milestone in human history isn't front of mind (or very nearly so) for anyone in a country that purports to place education so high among its priorities.

Also kind of upsetting that we view that milestone as a negative thing, with respect to national pride, and attempt to politicize it rather than celebrate it.

Then again, the very first time I came across Sputnik was in my very first book about spaceflight. This small book (maybe a little larger than my hand these days in all three dimensions) had one chapter titled - the *only* title I still remember - "Sputnik rüttelt die Amerikaner wach" (Sputnik shakes Americans awake). So "Sputnik moment" immediately resonates with me. But then, Apollo was a big thing for me.

My mother (born 1935) remembered Sputnik, of course; remembered people with Sputnik costumes for carnival - but being German, I had to explain what a "Sputnik moment" might mean. (She also remembers how the Cuban missile crisis interfered with a school field trip.)

As for PISA, that one was supposed to be a German Sputnik moment, at least when you listened to our politicians and media ... except, of course, nothing actually useful seems to happen, as anything either costs money or collides with (primarily from the political right) ideologies about our school system. (I wonder if the "dreigliedrige Schulsystem" somehow gets confused with the trinity in their minds?) Ok, so we actually got small improvements - together with other stuff I see as the opposite.

Then again, I remember, since the first time I started listening to politics, how it seems like every fucking year, there were cuts in education ... so I'm not all that surprised if the results are bad. Cause and effect, how the fuck does that work?

I await with bated breath Sarah Palin's spin on the Obama administration and the situation in Egypt these days.

I'm sure that Palin thinks that Pharaoh deserves every plague that he gets! (At least until he lets her people go.)

It's all due to W's "democracy agenda" - haven't you heard?

I understood that metaphor entirely and I was born in 1975. In Canada. Ignorant and proud of it is no way to go through life, Suss.

So I was born in 1982 and yet Sputnik moment made perfect sense to me---it conjures up new math which was way before my time.

Faegan Harti, concerning your statement "...in a country that purports to place education so high among its priorities." ---unfortunately, only half of us (the so called liberal elite) prioritize education. The other half (aka real 'mericans) often convey a blatant contempt for truth (and history, science, reality, etc.).

This is why Evolution has been attacked and why so many idiots think America is a christian nation.

It is an epidemic of the Dunning–Kruger effect; the primary reason for the republican party's continued existence, why roughly half of Americans believe in the rapture, and my main motivation for not wanting to live here anymore.

We do still have many great universities and colleges but they're probably more popularly appreciated in India and China than within the United States.