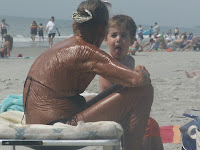 More right than I knew

It was my own fault for visiting my parents on a Friday. My usual treks to the family dairy farm occur on Saturdays. On this recent occasion, however, I was able to get away a day early.

I already knew that my Mom and Dad have a standing dinner date on Fridays with a group of fellow senior citizens. Instead of leaving me behind to fend for myself, my parents took me along.

Melanie is one of Mom's best friends. They style themselves as “twins” because they share a birthdate. Mel is exactly one year older than Mom.

At dinner I was sandwiched between the two women. Mel was delighted to meet Mom's eldest son, the distinguished professor of mathematics. I, naturally, was on my best behavior.

I was not the only adult offspring present. By an odd coincidence, Mel was being visited by her daughter Honey, whom she brought along to the Friday night dinner group. Honey ended up sitting opposite me.

The dinner group had selected an Italian restaurant for this particular outing. The service was attentive and the food was safely middle-of-the-road. No problem.

Honey appeared to be somewhat bored, but she found a way to pass the time. She put away a couple of Cosmopolitans and then started in on wine. I paid it little attention, but couldn't help noticing, given where Honey was sitting. As usual, I was imbibing a glass of the house cola (regular, of course; not that icky “diet” stuff).

At some point during the dinner conversation, Melanie made some kind of assertion that I didn't quite catch, but she followed it up with the distinct statement that she and my mom always got their way: “We're Leos!” declared Mel. “And Leos always get what they want!”

I turned toward Mel and said, “Perhaps that's true, Melanie, but I'm a Taurus. We Taurids don't believe in horoscopes.”

My riposte got a few chuckles, as I hoped it would. But it got a different reaction from Honey.

“It can't be that many,” I replied, but not out of any impulse of gallantry. I was just crunching numbers a little.

Mel is one year older than Mom. I am Mom's eldest, born while she was still a teenager. That doesn't leave Mel much room to have Honey “several years” ahead of me. We couldn't be more than a year or two apart. But I was polite enough not to ask Honey her birth year.

My mother later reported back to me. She had gotten the scoop from Mel. It turns out that Honey is exactly one day older than me.

Of course, I am recounting this story merely to brag about my unnaturally youthful appearance. Die of envy, you raddled oldsters!

That would be one way to spin it, of course, but that's not the real truth of it. It's not that I look unnaturally young. It's that Honey looks unnaturally old.

Let's leave out the word “unnaturally.” Honey looks perfectly natural for someone my age who spent her decades baking herself in the sun and burning in bronze skin tones that would do a tannery proud. And then steeped in alcohol, it seems.

That sun-screen stuff? Use it.

Otherwise you could end up holding a drink in one hand while patting an exact contemporary on the head and calling him “Sonny.”
Posted by Zeno at 9:30 PM

Met a primary/secondary school classmate this Summer. She hadn't aged too well, either. Didn't help that her mother had.

Only started working of my hide last year. And been steeping in booze for less than a decade.

Just one thing, Xeno, if you're a Taurean then you'd be born in April/May not March!

Thanks, Anon. I've never been completely certain when I was born. I mean, I was there, but ...

It's true -- I'm a Taurus, and I don't believe in horoscopes either.

I've had that experience. About ten years ago now, I was a bridesmaid at a friend's wedding. Went to a local spot to have wedding photos taken, and there was another wedding party there. Turns out one of the groomsmen was someone I'd gone to high school with. He recognised me instantly, and I still have no clue who he was, save that he said he was a high school classmate of mine. He looked like he was a not particularly well-preserved 45 and we were then in our mid to late 20s. He was darkly tanned and puffing on a cigarette, and looked like a hard drinker. I can't muster enough melanin to tan, so stay out of the sun mostly, have never smoked, and can count the amount of alcohol I drink in "drinks per year." Funnily, now that I'm in my mid-30s, it's really starting to show.

Stay off the cigarettes, too, folks, if you value your looks -- those things won't just give you cancer, they'll make you ugly before you go, too.

Interrobang is giving me a flashback.

I bought my first computer, an IBM PC, from a ComputerLand store in 1983. The sales rep who sold it to me was a fresh-faced kid who seemed like a young college boy. About four years later (certainly not much more than that), I ran into him at an IBM Products Center. He recognized me and called me by name. When he told me his name, I know I blinked in amazement. He was now portly and looked like he had aged fifteen or even twenty years, practically overnight. I wanted to say, "What the hell happened to you?" Fortunately, I minded my manners.

I still wonder, though. (Maybe something happened to the painted portrait in his attic.)

You just made two generalizations, Anonymous.