Friends who were present will recognize the liberties taken with the following story and the embellishments that punch up the narrative and highlight the unsubtle message it contains. When you get to recount the incident yourself, you can repair the lapses that produce l'esprit de l'escalier. I take my cue from a statement attributed by Mark Twain to the learned historian Herodotus: “Very few things happen at the right time, and the rest do not happen at all. The conscientious historian will correct these defects.”

❑
There we were, having a friendly chat over burgers at a local restaurant, when a hostess bustled over and seated a party of four at the booth adjacent to ours. It looked like a gaggle of college students—late teens or early tweens. I didn't recognize any of them and took no particular note. Except for one thing.

My paternal grandmother used to wax eloquent about the redheads in our family, especially (as best as I can recall) her twin sisters. The gene for red hair, however, appears to have been lost. There are no redheads in any generation I'm familiar with, and I know four: Dad's, mine, my nieces' and nephews', and that of their children. Not one ginger child in the bunch.

But my grandmother loved red hair and admired it immensely. To this day, although she's been gone for a quarter-century, I cannot see a redhead without having a nanosecond's recollection of my grandmother. Funny how persistent these odd connections can be. 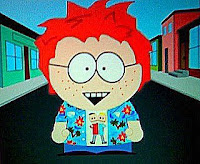 Anyway, one of the kids at the next booth had red hair, which he had cropped close and looked rather like red felt. It gave me a tiny smile as I thought how my grandmother would have taken special note of it (as indeed I was now doing) and then I consigned it to the memory hole as I returned to the conversation at my table. It was entirely possible that my brain's next attempt at garbage collection would wipe out the memory forever. But later something else happened to make it stick.

Thanks to my primary-care physician, who decided that I should be on a diuretic, I heartily appreciate Churchill's dictum that one should never miss an opportunity to empty one's bladder. It was almost time to leave the restaurant and I excused myself to make a quick pit stop. Having taken care of business, I was at the sink scrubbing my hands when in the mirror I saw the bathroom stall behind me open up. Out popped the redheaded kid, who made a beeline for the exit without sparing even a glance at the unoccupied sink next to me.

I returned to my table. The redheaded boy was back at his own table, chatting cheerfully with his companions.

“We ready to go?” asked one of my friends.

I pondered for a long moment.

I often lug my briefcase around with me, just in case I have some downtime and there's an opportunity to correct some papers. I often have a steno pad in my briefcase, a practice that goes back many years. A pad in hand gives one a reporterish aspect (in, I admit, a retro sort of way). I dived into my briefcase and pulled out the pad. I flipped it open to a blank page, got up, and sauntered over to the neighboring table.

“Excuse me,” I said. “If you don't mind, this will interrupt you only a minute or two. I'm a faculty member at a local college and I have a couple of questions I'm collecting answers to.”

The young people paused in their conversation and blinked curiously at me, puzzled. But I was an older guy who was wearing a tie. A nicely conventional authority figure. I turned to the redhead and pulled a pen from my pocket.

“The first question is, do you know what E. coli is?”

The boy made a vague sound and shrugged his shoulders. His friends tittered.

“That's okay,” I said, jotting a note on my pad. “Lots of people don't know that one. E. coli is a bacterium that often causes food poisoning, among other things. So now you know what E. coli is. My second question is, do you know how E. coli is spread?”

The redhead narrowed his eyes just a bit, perhaps getting suspicious. They were hazel, I think, but I'm the wrong person to ask about that. Practically everyone in my family has dark-brown eyes and dark-brown hair (if it hasn't gone gray or fallen out). I have no expertise in the nuances of eye color.

“I don't know,” said the boy. His friends were exchanging glances. One of them volunteered: “Contamination?”

I nodded my head and scrawled another note on my pad.

“Yes, food contamination is one way. E. coli is commonly found in the lower digestive tracts of warm-blooded animals. That includes humans.”

“You mean in shit,” exclaimed one of the young people, to general laughter.

“Yes,” I agreed. “I do believe that is the correct technical term for it. One last question.”

I looked the redheaded boy in the eye (hazel- or whatever-colored). He was looking just a little bit pale, which is a good trick for someone already so white, but he was clearly anticipating trouble from the inquisitive professor.

I poised my pen above my notepad. The boy went crimson (but not quite enough to match his hair). His friends had been looking at me as I asked the final question. Their heads snapped back toward their friend and their hands pulled back sharply from the finger-food appetizers in the middle of their table.

“No! I always wash my hands!” he blurted.

I did a little more random scribbling.

“Fascinating,” I observed. “I ask these questions only of guys I have personally seen leave a restroom stall without washing their hands.” (A true statement, even if I had never asked those questions before.) “A majority always seem to lie about it, so I guess that means they actually know better, but couldn't be bothered to take the time to wash their hands. Fascinating.”

I wrapped it up.

“Okay, we're done here. Thanks for letting me interrupt your meal. You'll forgive me, I trust, if I don't shake hands. Now go wash your hands before you eat lunch with your friends or touch anything they might touch. So long!”

I flipped the notepad shut and shoved it back into my briefcase. I gave the agitated young people a cheerful nod and headed toward the door. As we got outside, one of my friends said, “Talk about a dirty trick! You humiliated that poor kid.”

“It was a teachable moment,” I replied. “Other than that, I wash my hands of the whole thing.”
Posted by Zeno at 11:30 AM

Your use of the word "tween" differs from the popular culture. (At least among non-Hobbits.)

Too true, Taz, but I care not what marketeers say. My sympathies are with hobbit usage (and I employed it in a context that makes my sense entirely unambiguous).

Maybe he was in there to snort some coke.

Of course, all the care in the world with washing hands goes for naught if you use them to turn off the water by turning knobs that you contaminated when you turned the water on.

Which is why it always boggled me that my local Red Cross Blood Donation Center, which should know better, had knobs instead of levers, foot pedals or automatic controls in their restroom sinks. Levers can be worked elbows or wrists, thus not recontaminating hands. How foot pedals and automatic controls prevent problems should be obvious.

Word verification: "mythy," a true story that sounds like a myth. Sort of an inverse of "truthy"

Yeah, you were a bully. Not a teacher. A teacher wouldn't have gone that last step.

It was entirely possible that my brain's next attempt at garbage collection would wipe out the memory forever. But later something else happened to make it stick.

You mean, increased its reference count?

Well played, Zeno. That was another very enjoyable tale!

Nice. I can't wait to see how this story is told in thirty years.

ok zee v funny but a little over the top. more drama than i remember. esp the last bit. r u sure everyone in our gp had clean hands? ;-)

Well, Zeno, you are quite the cleverdick!

If I were the ginger kid in this situation, I likely would have snagged a peak at your license plate when you left, with the hopes of someday vandalizing it in the future.

Evidently, you don't live in a large metropolitan area like I do, where carrying hand guns is legal. There are just too many stories on the local news each evening of "innocent" people knived or gunned down in the parking lot of the local Applebees or Dennys for me to ever "attack" a group of strangers in that manner. In this day and age, when violence is seen as the natural response to an affront to the ever-fragile male ego, I would be a little more circumspect. Is it really your job to make people wash their hands, one boy at a time? Beware evolving slowly into a pompous and tedious old queen!

A remarkably large number of people are taking this story entirely at face value, as if the first paragraph doesn't even exist. I wonder why that is.