Can you hear me now, God? 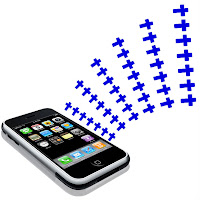 Are you looking for a new angle on your prayer life? A young man in California has a suggestion and is hoping you might pitch him a few bucks in return. He's devised an iPhone application for petitioning God and is awaiting Apple's approval to sell it via the computer company's apps store.

Here are some excerpts from a news article in the Sacramento Bee:

For eons, people have reached out to the Almighty with prayers and supplications. Soon they might be able to use their iPhones.

Fair Oaks teenager Allen Wright thought up an application for the Apple iPhone called “A Note to God.”

It lets iPhone users send prayers into cyberspace and allows them to read the prayers of others. The messages are stored in a database, and users remain anonymous.

If you're anonymous, how will you get credit from God for your prayer? (That omniscience thing is going to have to kick in.)

Wright, 17, submitted his proposal to Medl Mobile, a Los Angeles startup that is developing apps for Apple to sell on its Web site. It selected “A Note to God” from 20,000 proposals.

“It's so simple, it's brilliant,” said Andrew Maltin, one of the co-founders of Medl Mobile. “We think it's going to be extremely successful.” 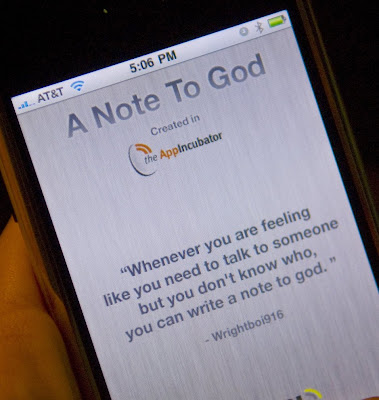 Wright, a junior at Del Campo High School and regular churchgoer, said he came up with the idea while lying in bed and feeling lonesome.

“If you want to send a message, and you don't have anybody to talk to, you could send a little prayer,” he said.

Don't have anybody to talk to? I thought you could talk to God at any time. Perhaps not. But at least we can be sure that God is eagerly waiting by his iPhone.

Successful apps can generate thousands or even millions of dollars for developers. Any proceeds from “A Note to God” would be split between Apple, Medl and Wright.

The application is not a joke, but a sincere way for people to reach out to the divine and to each other, [Maltin] said.

Users can read each others' prayers and be supportive by clicking on a “thumbs up” sign, he said. Otherwise, they can't leave feedback or respond, he said.

Responding, after all, is God's job.

Religious scholars contacted by The Bee on Monday welcomed the concept, although one offered a note of caution.

The Rev. James Murphy, vicar general of the Catholic Diocese of Sacramento, agreed the iPhone app “could be a high-tech form of prayer and an authentic way to express our desires to God.”

“There is in each one of us the need to communicate with the divine and to reach the transcendent," he said.

But he cautioned would-be users to question their motivations.

“Prayer is direct to God, and God should be the primary motive,” he said. “If the motive is to be seen by others, be careful. There's a sense in which prayer is private.”

He said whatever the form, prayers are heard. “God will hear it," he said. “You don't have to have his e-mail address.”

One must give Father Murphy credit for cheekiness. The Catholic Church is often criticized by non-Catholic Christians for encouraging the practice of praying to the saints in heaven, choosing to invoke intermediaries instead of praying directly to God (or Jesus—one of God's more popular avatars). But here we have Father Murphy warning people that prayer is direct to God and that they should be careful about broadcasting their pleas to the deity. (Sorry, Virgin Mother, I forgot we were on a conference call. Would you mind hanging up so that Jesus and I can chat in private?)

Darleen Pryds, an expert in medieval religious practices at the Franciscan School of Theology—part of the Graduate Theological Union, in Berkeley—called the app “a brilliant use of technology” that brings to mind the 13th-century bells summoning people to pray.

“This application sounds to me like a call to prayer,” she said. “It creates a community of prayer, and by seeing other people's prayers, it is a reminder to pray yourself.”

Or a muezzin's call to prayer from a minaret!

His favorite iPhone app is one that calls up quotes from Scripture.

In his suburban home on a quiet cul-de-sac, Wright demonstrated the working model of “A Note to God” on his iPhone.

He said the need to write a message focuses his prayer. The messages can be as long as you want, he said.

No limit on length? Excellent! I presume one could copy and paste 53 copies of the “Hail Mary” and get credit for a rosary, right? (Oops! That's my Catholic roots showing. The BVM just muscled back in.)

Allen's father, Tod Wright, is pretty certain his son has latched onto something good.

The 44-year-old Wright said people need a way to reach out when they are grappling with heartache, trouble and tragedy. His son's app might provide an outlet for their prayers.

“It's going to do something for a lot of people to help them through," he said. “Having a place you can send a message to your lost and loved ones—people you believe are your guardian angels.”

“All of us could use some place to reach out,” he said. “I think Allen's is perfect.”

Heck, it's just ages since I wrote my own app for such a purpose. Obviously I should have patented it.

In those days, around 1970, our company had installed Fastrand mass storage on the computer. This was an amazing device, seven feet long, weighing a ton and a half, storing data on two rotating drums resembling chrome-plated sections of sewer pipe, and holding about 90 million bytes. Think of that! And out of that huge capacity it could access random data in just 92 milliseconds. To top it all off, it had a sector size of 28 36-bit words. I am not making this up.

I see that the first Google hit on that wonder is
from my old colleague at that and other endeavors.

Anyway, I filled one full track of that storage with OM MANE PADME HUM, converting it to a prayer wheel rotating at 880 rpm, which is way faser than any Tibetan monk could spin a wheel, and indefatigable to boot. Can your fancy-schmancy iPhone do that? I credit this for my present enlightened state.

Praying via an iPhone app is better than not praying at all.

Not quite right, Anonymous. In terms of effectiveness, they're exactly the same, except that not praying wastes less time.

It reminds me of Arthur Clarke's 9 Billion Names of God.

How about an app for electronic ex-votos? It could be called iVoto and instead of buying wax heads, legs, arms or any other part of the human body that you want to heal, you could buy e-parts and eventually even build an e-body. If you don't like electronic wax body parts, there's also the possibility of electronic marble plaques with engraved inscriptions.

Wow, there's a world of possibilities here. Maybe I should shut up now and contact Medl at once...

It sure does, doesn't it, Ridger? I nearly put in a link to that famous story by Clarke. In atonement for neglecting to do so, I offer the following for the uninitiated:

Here you go: http://www.manikorlo.org/ (not an iPhone app, but lots of people (including me) don't have iPhones)

(I can't remember how I first came across this, but 9 billion names of god was the first thing that came to mind for me, too.)

Now it's only a matter of time until the first denial-of-service attack.

Here's hoping your rain of frogs insurance is paid up.

I started to wonder whether we were seeing an application of Poe's Law. But I guess if it's in the Sac Bee, well, it must be real, innit?

Assuming it is, I actually approve: it's harmless, it stands to make the kid (and others) a good bit of money, and it prey's (pardon the wordplay) on a segment of the population I don't care about.

Where, in the ironic twist I hope for, he acquires knowledge and comes to recognize how silly it truly is.

This country just scares me more and more each day. Today in Tempe a Baptist minister was publicized for routinely praying with his congregation for President Obama's death! I've read about memes, which seem to be "thought viruses" that spread through a population, and I think the USA has a serious disease right now, a composite of fundamentalist tinkertoy Christianity and right wing hate.

Soon we will have Electric Monks as in "Dirk Gently's Holistic Detective Agency"!