We all know about the notorious “molten sea” of 1 Kings 7:23, a basin in Solomon's temple whose description implies that pi equals 3:

And he made a molten sea, ten cubits from the one brim to the other: it was round all about, and his height was five cubits: and a line of thirty cubits did compass it round about.

Much effort has been devoted to explaining away the contradiction, since it would be bad (from some perspectives, that is) if the Bible were found to contain an error. The most persuasive, in my view, is that round numbers were preferred in a time predating our possession of decimal notation and the modern predilection for mathematical precision. One wonders, though, why God didn't bother to divinely inspire his scribes with greater accuracy. I guess God was more casual in those days, too, although this is not a common view of the Old Testament deity.

Today, however, we have more evidence suggesting that religion's casual approach to the truth is one of its fundamental aspects, not just an old-time lapse. The good people at BlueGrassRoots took a trip up to the notorious Creation Museum to check it out for themselves. Their report is festooned with candid photographs and the narrative is full of wry observations. Check it out and see for yourselves. (After all, you wouldn't just take things on faith, would you?)

My favorite photo comes near the end of the intrepid journey through the museum. On the way out, the visitors encountered a cautionary poster reporting the shocking news that “only 1 in 3 teens say they will continue to participate in church life once they are living on their own.” 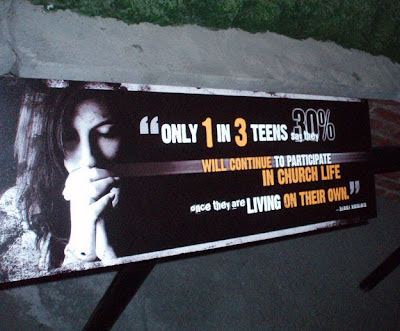 Did you notice anything about the poster? Someone has added “30%” to the background of the text. It looks like contemporary religionists are just as fond of excessive round-off as the authors of the Bible. Either that, or perhaps the revealed value of 1/3 is 30%. I wonder when God told them that.

I mean, they believe in creationism. Why not screwed-up math, too?
Posted by Zeno at 2:00 PM

Maybe it was just rounding error. Say the vat was 9.7 cubits across. Then the circumference would come to 30.48 cubits and using normal rounding conventions, this would be accurate. Is it God's fault he hadn't invented fractions yet?

Is it God's fault he hadn't invented fractions yet?

Of course it is.

Whose else could it be?

The actual number of Protestant teens who continue to regularly attend church in their 20's after leaving home is ~30%. The *quote* on the board you have a picture of rounded that to '1 in 3', a common expression.

this is quite a reach!