As funny as ever!

Answers in Genesis is busy putting the finishing touches on the Fred Flintstone Hall of Fame, perhaps better known as their Creation Museum, and generating publicity for its grand opening in May. You'll recall that this is the museum that miraculously puts northern Kentucky within a day's drive of two-thirds of the U.S. population. (Of course, it's not as though numbers are AiG's strong suit.)

The latest issue of Answers Update (Vol. 14, Issue 4) devotes a lot of its space to promoting the Creation Museum and commenting on coverage in the secular media of its forthcoming opening. It also contains a new installment of CreationWise, a comic strip that proves once again that the Johnny Hart's B.C. style of moribund humor lingers on. 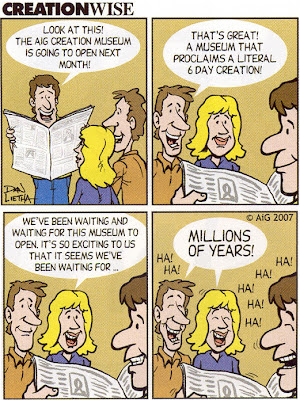 In the creationist universe, “millions of years” is automatically side-splittingly funny. (That's why the artist drew in “Ha!” several times, so that we would understand.) Imagine the hilarity if “billions” had been cited instead!

Speaking of millions of years, Christians must be wary of this concept. As the CreationWise strip below shows us (click on it for a larger view), the Christian who walks through the door marked “Millions of years” will be assaulted and devoured by some kind of cephalopod. (Do you think PZ Myers might be hiding behind that door?) And then the pages of Genesis are expelled from the portal. Now there's a happy ending for you! (I suspect my interpretation is not the one intended by the cartoonist.)

I think the cartoon means that the Bible is indigestible because it does not fit in with the natural world.

I thought dialog might help the cartoon make more sense, so in the Bronze Dog tradition, I tried adding some.