Let slip the sharks of love 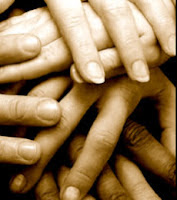 What are people afraid of?

The California legislative season has come to an end with our beloved governor's executive action on stacks of bills approved by both houses of the state legislature. One of the measures vetoed by Schwarzenegger was AB 849, a bill by Assemblyman Mark Leno to render California marriage laws gender-neutral. Since couples of the opposite sex are already permitted to marry, the effect of AB 849 would have been to authorize same-sex civil unions throughout the state. In a remarkable act of contortion, the governor said that same-sex marriage was an issue for the courts to decide, although he personally supports the idea. Let's give the Governator his due for standing the GOP platform on its head by endorsing the idea that the courts should usurp the role of the legislature.

While it's fair to argue that the majority of California voters intended to block same-sex marriage when they approved Proposition 22 in 2000, the governor uses the proposition as an excuse to avoid setting up exactly the sort of court test he claims to want. If he really supports the idea of state-recognized same-sex unions in California, the logical step would have been to sign AB 849 and let the courts thrash out the conflict between it and the voter-enacted proposition of five years ago. Instead, however, our Inaction Hero panders to the hard-right remnant of his electoral coalition by vetoing the measure and leaving the court to find the implication of equal marital rights in existing state law and the constitution.

Our cowardly governor is now taking his cue from such stalwarts of human rights as Pat Robertson, who absurdly declares "Now they want to destroy marriage" (where "they" in this instance referred specifically to lesbians). Yes, indeed. Those people working so hard to obtain the right to marry can hardly wait till marriage is destroyed.

Come to think of it, though, I believe it would be a good idea to destroy one aspect of marriage: namely, the government's involvement in it. Let's get the government out of the marriage business. Marriage is a religious notion, even to the point of being a sacrament in various Christian sects, so let's leave marriage to churches, synagogues, temples, mosques, etcetera. Limit the state's involvement to civil unions. Michael Kinsley addressed this idea in some detail in his Slate opinion piece titled Abolish Marriage. As Kinsley pointed out, once there is separation of civil union and religious marriage, the religious groups can enforce all the rules they like about who may be married to whom and under what circumstances. (What fun they'll have.) On the other hand, civil unions can be just as flexible as its participants desire. Those who are united may vary in sex, age, number, and degree of affinity as much as they please. The state's interest would be limited to such minor details as setting a reasonable age of consent, the rights of children produced within a civil union, and some defensible limitations on incestuous unions between fertile partners (and I do mean "fertile" partners, who could produce offspring with an unduly heavy genetic load of recessive traits; I don't care what infertile partners of the age of consent want to do whatever their degree of affinity).

Wouldn't this all be terribly complicated? I can't see why it should. The civil union contract would be mostly a list of signatories, jointly responsible for all children, property, and debts. Do you imagine that attorneys would be reluctant or unwilling to set up practices specializing in multiple-partner civil union law and dissolution of union? It would all be covered quickly enough.

Defenders of same-sex unions have often been put on the defensive by marriage traditionalists who declare that gay marriage will lead to official recognition of polygamy, incest, pedophilia, and bestiality. Let us be defensive no more. These charges are easy to answer. We can dismiss the arguments regarding pedophilia and bestiality by citing the key aspect of civil unions: consenting adults. (Children aren't adults and animals can't consent. However, if you teach Fido to nod his head, good luck in court.) Infertile incest is none of our business and isn't going to catch on anyway. As for polygamy, strictly speaking that means multiple wives, just as polyandry means multiple husbands. I just argued that there is no legitimate state purpose in preventing multiple partners from forming their own combinations of group unions, provided that state law protects the equality of the partners and makes the partners jointly responsible for the care of any children.

Of course, not everyone agrees. Even among same-sex union advocates. Sex advice columnist Dan Savage featured a statement by E. J. Graff which argues that same-sex marriage of couples lies within "the West's contemporary marriage philosophy", an evolving notion which today features equality between partners. Graff further argues that polygamy would be a retreat into the man-owns-women feudal history of marriage. Nonsense. I am not arguing for a return of patriarchal Mormonism's "plural marriage" where multiple wives are subject to the authority of a ruling husband. I insist on equality before the law of all the partners, of whatever combination. If some cultists perceive in multiple unions the opportunity to establish old-fashioned personal harems, I hope they will discover otherwise when their dissatisfied partners use the law to escape (along with a personal share of community property). Remember those lawyers I cited earlier? They'll be on the job the moment the first drop of blood hits the water.

Group marriage, by the way, has an honorable literary history. It was long ago featured in the work of one of the icons of American libertarianism, although most of us appear to have forgotten about it. Robert A. Heinlein used it as a fundamental aspect of his lunar colony culture in The Moon is a Harsh Mistress. His heroine, Wyoming Knott, is accepted into a group marriage with a response abstracted from her own nickname: "Wye Knott?" I concur.
Posted by Zeno at 6:19 PM

You raise several valid points, and once again I am impressed by the ease of your prose. (In fact, your writing may be too accessible. Should the trend continue, I worry that English majors will no longer be able to defend their discipline if they find that byzantine syntax and the use of $10 words like “byzantine” are no longer necessary.) However, I believe you have overlooked the broader national and even international implications of your idea to distinguish between marriage and civil unions: America would have adopted a policy similar to the French, who have already separated the state’s interest in marriage from religion’s. And we certainly do not want to be like the French, even less francophiles.

I shudder to think of the consequences if we were. Perhaps the most obvious would be the ensuing change to the American wardrobe. Gone would be the cowboy hats, replaced by foo-foo berets. Likewise, cowboy boots would be largely replaced by sensible “urban footwear”; the cowboy boots that did remain would be largely unrecognizable, being made of bright yellow, pink, and neon green latex compounds. The American automotive industry would also suffer. Sales of the once prized SUV’s and the mammoth Hummers would decline. In their place, Americans would buy smaller, less-expensive, and more fuel efficient cars better suited to driving a family on paved roads than relocating a company of Marines across a hostile battle-field. Americans would also likely buy many more motorcycles. And while this is acceptable because motorcycles are sufficiently macho, the increased sales of scooters and mopeds would profoundly change the American self-image. I think you will agree that a nation that sells its citizens repackaged military vehicles will tend towards the bellicose. But I find it difficult imagine that a nation of scooter drivers being all that pugnacious.

Of course some might point out that a nation less enthralled with over-powered automobiles might be less likely to plunder the Alaskan wilderness on the off chance it holds some oil, and less likely still to misunderstand war as an effective way to refute an ideology whose central tenet is “infidels want to oppress us.” In short, we might become more deliberate and more considerate participants in global politics. Clearly, this must not be.

I share with you, Anonymous, a deep concern for the fate of English majors if mathematicians continue to counter the orotund and sesquipedalian prolixities of the former with pellucid prose. You, of course, need not fear, since your literary reputation is assured, as amply attested by your amazingly numerous entries in Bartlett's Famous Quotations.

In reponse to your concerns about potential French incursions into our cultural milieu, it was a sin of omission on my part to neglect to point out the specifically Swedish influence on my argument. The renascent Swedish Feminist Initiative has vowed to abolish traditional marriage if voted into office in the next parliamentary elections.

Having lived through it, there's one place where government involvement with marriage is difficult to eliminate: Immigration. In that sphere, incidentally, not only is there a question of whether the marriage is sanctioned by the government, but there is an actual attempt to verify that the marriage is, well, whatever it is that the person doing the interview feels the marriage should be.

But then, I tend towards a view that there's not much point in attempting to maintain borders anyway.

This is preposterously belated, but I feel compelled to indulge my desperate pedantry regardless: "polygamy" does not refer to the practice of having multiple wives specifically, but to the general case of institutionalized polyamory. You were doubtless confused by the similarity to the actual term for arrangements of multiple wives, "polygyny".