Dressing on the side

During a recent jaunt to San Francisco, I popped into the Books Inc. branch in Opera Plaza on Van Ness. While browsing the shelves, I encountered a curious book aimed at young readers. The slender volume was A Little Book of Language by David Crystal. The book flap identified the author as “one of the world's pre-eminent language specialists.” Never heard of him, I thought.

I read further. Crystal is the author of The Stories of English. Now that rang a bell. When I got home, I checked my library. Oops! The book in my collection was actually The Story of English (by McCrum, Cran, and MacNeil). It seemed likely that the title of Crystal's later book was a wry play on the title of its predecessor. I liked him already.

I purchased A Little Book of Language with the notion of giving it to a precocious nephew, but he's going to have to wait till I acquire a second copy. Crystal's book is staying in my collection. While written specifically for a young audience, A Little Book of Language is a gentle and conversational introduction to notions of language and linguistics. Within the compass of a slender volume, Crystal ranges widely from baby talk to tech talk, touching on texting, signing, slang, and speech versus writing. He pitches his discussions at an elementary level without condescension. There's the occasional wink as he presents some of the amusing idiosyncrasies of language and deflates a few pompous over-generalizations.

To add to the fun, Crystal is a British writer and the differences between American and British usage crop up in ways that he doesn't always identify—although he does point out several instances. One amusing American-British dissonance occurs in the chapter on “Developing a style,” in which Crystal discusses one's choice of wardrobe as a metaphor for selecting a a prose style. This paragraph give a nice sample of his conversational manner as well as an unconsciously(?) wry twist at the end:


If we look inside our wardrobe, what do we see? Most of us have managed to collect quite a range of different kinds of clothes. We have posh clothes for special occasions, casual clothes for everyday, clothes to wear if it's hot, clothes to wear if it's cold, clothes for messing around in, swimming costumes, and lots more. We don't mix them up. We'd be daft if we went out in the snow wearing shorts, or went to the beach on a boiling hot day in a mac. And if we've been invited to a swish party, we dress up for it. 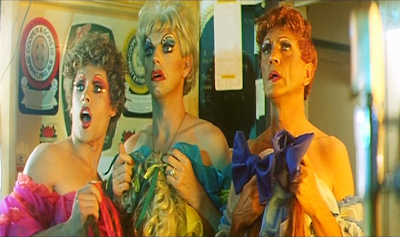 If you need help translating from Real English to Merkin, feel free to ask. It's certainly a long time since I encountered 'swish', though I'm not sure I would have included a frame from Priscilla as an example! (Or perhaps that wasn't your intention.)

David Crystal is a wonderful writer. He has a blog, irregularly tended to, and has written some excellent books on language and usage.

Then there's me, getting caught in the snow in well, not shorts, but capris. (Something about stopping on the side of the road near the crest of the Sierra Nevada, trying to get a cat to use the litter box rather than my lap.)

I hope it doesn't reflect too badly on my writing styles.:-)

Seriously, though, I find it far easier to change clothes than to change writing styles. I can NOT abandon my thesis for an evening to work on my fiction. I simply can't switch back and forth that easily. I expect it'll take a lot of practice before I can find my fiction-writing voice again.