A boon for Lucky Larry

Teachers typically take pains to ensure that their exam problems are clearly stated and have unambiguous answers. This is especially true in math, where precision is at a premium. I try to make it clear exactly what I want and what form it should be in (such as “exact” or “rounded to the nearest hundredth”). The last thing any exam grader wants is a problem that is easily misinterpreted, because that just leads students astray. Even worse, however, is the problem where an incorrect calculation can produce the right answer. Then you're really stuck. You have to read the solution especially carefully to make certain the student didn't get the right answer by a lucky fluke.

I have put myself in that situation. It happened in a suite of problems designed to test my students' ability to compute the perimeter, area, or volume of certain standard geometric shapes. Having quizzed them on various rectilinear figures (break it up into rectangles, kids!) and circles and boxes, I began to challenge them with combinations of the basic forms. 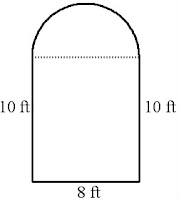 You may be familiar with the classic Norman window, which is a semicircle mounted atop a rectangle, the semicircle's flat side coinciding with one side of the rectangle. In finding the perimeter, the student must make a judicious use of the circumference formula for a circle and the perimeter formula for the rectangle. The answer is the sum of half the circumference of the full circle and the three exterior sides of the rectangle (omitting the one adjoined to the semicircle). Not too hard. The computation of the area is even easier: half the area of the full circle plus the area of the rectangle (that length times width business beloved by all).

I wasn't surprised that the results were a mixed bag, but I felt we were making progress. Each time I quizzed them on a variant of the basic shapes, more students were picking up on the standard formulas and the tweaks required to apply them to the hybridized shapes. With an excess of confidence, I then reached a bit too far and outdid myself: I adjoined a quarter-circle and a triangle. To make matters much, much worse, I made some very bad choices for the dimensions. Can  you see my mistake(s)?

It gets better. For the area computation, they needed to compute πr2 and take one-quarter of it. A full circle of radius 12 ft would have an area of 144π ft2, so a quarter-circle's area would be 36π ft2. Several students, however, apparently reasoned thus: The arrow labeled with the “12 ft” goes all the way across, so it must be a diameter. I need to use the radius, which is half of that, so I'll use 6 ft. It's a circle, so the area is πr2. Therefore I get 36π square units.

In grading this problem, it really didn't much matter if the answer happened to be right. It was much too likely that a right answer could be obtained by accident. I corrected this exercise very carefully and very slowly.

One of my favorite ways of nodding off to sleep at night is to generate relatively prime Pythagorean triples using an algorithm too lengthy to explain here. I find they DO tend to fall into a few patterns:

Damn fingers -- uh-oh, just blasphemed, so no Rapture for me!

I just make the mistake of not working the problems through completely ... (I'm lazy.)

As I result I ended up giving the kids a triangle that turned out to have a right angle by accident. (Exactly, yes, but I only discovered so when they asked how many decimals they needed to use to show that it wasn't right ...)

That's good point, Sili. That's why I try to prepare the solution key before actually giving the exam or quiz. I once worked as a TA for a professor who would scribble out a problem, cock his head for a moment's thought, and say, "Yeah, that'll have a real-valued answer." Then we'd discover (for example) that the prof had inadvertently created a problem requiring the solution of a cubic equation, which he had not intended. (Of course, there was a real-valued root, but the students were ill-equipped to grind it out in those primitive pre-calculator days.)

My son's middle school has been cramming them for the Big State Test. They are using "professionally" prepared materials, which are rife with poorly worded or conceived problems. I'm going over his homework with him every night.

"A baseball play hit 28 singles, 16 doubles, 11 triples, and 5 home runs. What is the probability of his NOT hitting a home run? A double?"

But that second question. Do they mean "NOT hitting a double" or "hitting a double." Based on my understanding of English, I would say the former. My son thought the former. The teacher said he would accept either interpretation. I sure hope the Big State Test isn't like this.

As someone who has graded the long responses for the Big State Test for various States, let me assure you that the test questions can be less than ideal.

The worst ones I have seen involved asking students to show what combination of change (dollars and cents) make up a certain value. The correct answers they provided were actually incorrect because they didn't use denominations such as the fifty cent piece or the two dollar bill. Of course, they told the scorers not to mark down for those answers that were wrong (right). Then there are the questions that ask to "find X" in response to which a student circles "x". You'd think they would say "find the value of X". After all, the student was technically correct.... :)

Don't get me started on scoring the essay questions in writing.

In any case, the reason that the question showed up on the practice test was probably because the question was a poor one. But yes, those questions do show up on all types of exams. In the end, one of the hardest things I found as a TA and lecturer was writing good exam questions.