Who was that masked Hispanic? 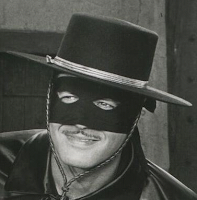 I know you are, but what am I?

Yes, we live in entertaining times. The Republicans wallow in the Slough of Despond (taking such comfort as they can in the mud they find there) and the right-wing is contorted in angst and paranoia. (Are they really paranoid if we're out to get them?) In past years, it seemed that no GOP talking point was too absurd to be treated with respect by the supposedly mainstream media. Now, however, it appears that the Republican noise machine may have blown a gasket or two. When they pumped up the propaganda organ to attack President Obama's first nomination to the Supreme Court, quite a few people recognized hot air when they saw it.

In particular, the snide attacks on Sonia Sotomayor's “first Hispanic” status deflated rather quickly. It must be quite embarrassing to lecture someone for not doing his homework, only to find out that your “correction” needs correcting. In case you missed it, the argument was that Benjamin Cardozo was actually the first Hispanic justice on the Supreme Court. He served on the high court from 1932 to 1938. Here's a comment from Israel Jewish News that was cheerfully picked up by Free Republic:

Uh, I guess that Obama's PR team isn't capable of looking back in Supreme Court history 70 years? I know the drive-by media can't possibly do any research—that's nothing new. If Obama told them he was going to put the first person on the moon, they would probably just report it without remembering we already did that too.

Was Justice Cardozo a twofer? Hispanic as well as Jewish? It's a bit of a puzzler, because if Cardozo is considered Hispanic, then so am I.

And I doubt that I am.

Wikipedia cites a biography of Benjamin Cardozo as the source for the claim that the Cardozo family considered itself to be descended from the Marranos of Portugal. These were Jews who converted to Christianity (as least in appearance) to avoid expulsion from the Iberian peninsula (the western end of Europe that comprises both Spain and Portugal). There's no particular reason to doubt the Cardozo family folklore. The last name is common enough in Portuguese circles (although the “Cardoza” variant is dominant).

It's quite possible, therefore, that Benjamin Cardozo was descended from Portuguese Jews. Does that make him Hispanic? It gets down to a matter of conflicting definitions.

My own family would deny being Hispanic, although we might concede being Latino. That opens up a whole new controversy, of course.

“Latino” can be construed as referring to Latin America. That would leave out the Portuguese. It could also be construed as referring to descent from Latin-based Roman culture. If one tries to pare that back to those cultures that retained Latin-based languages, we have the nations whose primary tongues are the Romance languages of Spanish, Portuguese, Italian, French, and Romanian. Good luck sorting that out.

In this country, one sometimes hears the term “Luso-American” applied to people of Portuguese descent. (Or, as my college roommate liked to render it, “Loser-Americans.”) It's not very common, however, and I know of no consensus among the members of my ethnic cohort concerning a preferred nomenclature. We aren't a particularly overt minority.

Sonia Sotomayor, on the other hand, is a thoroughly unambiguous case. The Supreme Court nominee is a puertorriqueña who will clearly be the high court's first Hispanic/Latina member. The critics who advance the name of Cardozo as a counterexample are just plain wrong, but I understand their point. They're gleefully mocking the Obama administration for failing to perform the due diligence that would have discovered a false fact. The Bush administration, after all, used to find false facts all the time.

It was sort of its speciality.
Posted by Zeno at 8:00 AM

Lusitania was a region within the Roman territory of Hispania (basically the Iberian peninsula). For those of us who actually pay attention to etymology, there's no question: Portuguese -> Lusitanic -> Hispanic.

However, culturally Cardozo is no more Hispanic in the socially-constructed American-Hispanic way than Generalissimo Francisco Franco.

I recall hearing somewhere that Francisco Franco is still dead.

Portuguese was a pretty overt ethnicity when I was in elementary school in Sacramento in the 1980s.

Which is another good point: when are we going to get around to appointing a member of the severely-underrepresented deceased contingent to anything?

An interesting point, dance. I was in Sacramento in the 1980s as an employee of the state government. The local Portuguese contingent was certainly visible in a couple of distinct manifestations: one was St. Elizabeth parish, which was the locus of religious festas like Pentecost (although I don't know what the situation is since the Legionaries took over), and the second was the S.P.D.E.S. (the Holy Ghost Society), which sponsored the festas and other events related to Portuguese culture (esp. for Azoreans). These things also existed when I was a child down in California's Central Valley (and they're still going on throughout the state), but it seems to me they were more in the background than on the front page.

I confess that I am disconnected from contemporary Portuguese immigrant culture. I should attend a festa.

I had a colleague in Holland called Lopes Cardozo. She was thoroughly Dutch, but said her family came from Portugal back in Spinoza's time. Maybe Cardozo was more common back then and survived in families outside the home country?

Yes, Ridger. I'll just smile and nod here while you get all offended and miss the point.

You do that, unapologetic.

It does seem odd to have a category for Spanish-derived culture and/or ethnicities, but not the closely-related (?)Portuguese. But sure, "Romance language oriented" is too broad. However, that isn't the most relevant point about Cardozo anyway. If his family really was Jewish, then their "ethnic group" is most properly the Jews. Jews moved from nation to nation and where one is born shouldn't be the most important thing. After all, a person of German ancestry who happened to be born in Mexico isn't really a "Latino", would you agree?

The most significant issue IMHO is the degree of intermarriage - what % of being X should qualify as "being X"?

Just got turned onto your blog by a fellow Math Professor, John, out here in NYC.

I just wanted to encourage you to seek out that "Festa." Judging from your musical tastes, you would probably love the "Festival das Bandas," a gathering of all the Portuguese Philarmonics in California state (15 total, I think). It moves from town to town every year. I played some years in Nova Aliança and Banda Velha in San Jose, as well as in San Diego. (I am also a teacher in NYC, and actually play for the Banda da Nossa Senhora de Fátima in Newark: http://www.myspace.com/bandanossasenhoradefatima)

I do not know how far north you are, but the alum rock exit off of the 101 will bring you to the Cinco Chagas Church and the avenue that is "Little Portugal." And, as you know, it is hard to find more open and festive people. They would be glad to have you, and I think you would enjoy yourself immensely.

Having been back and forth between Portugal and the states, the Portuguese bands, clubs, and festas have always been a blessing for me. Para matar saudades, e o convívio.

A cordial greeting to you then, um abraço.

Thank you for giving voice to us Latinos, Lusos, etc.!