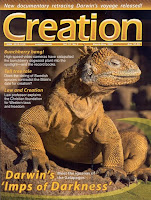 Creation Ministries International of Australia agreed last month to bury the hatchet in its years-long dispute with the U.S.-based Answers in Genesis. Either CMI and AiG tapped into some unsuspected well of Christian charity, or both sides got tired of their attorneys tapping into their bank accounts.

What has the AiG-CMI “kiss of peace” wrought? Well, first of all, the two sides have stopped saying nasty things about each other. As a result, CMI no longer accuses AiG's Ken Ham of using deception to steal the subscribers of CMI's Creation magazine when he launched Answers magazine in 2007. Although he did. Ham presented Answers as a successor to Creation and not as a rival. If one read only AiG's mailings, it appeared that Creation was being discontinued, when all that was ending was Ken Ham's willingness to continue to distribute it to his U.S. membership base. For his part, Ham treats the controversy with delicate diffidence in a post on the AiG website:

While the intent was to offer both the Australian-published Creation magazine and the new U.S.-published Answers magazine (sometime in 2008 or 2009) as two options for its subscribers, irreconcilable differences arose concerning the printing and distribution of Creation magazine in the United States. AiG-U.S. as a result had to modify its strategic plan to offer just the new Answers magazine, rolling it out two–three years ahead of schedule. While this regretfully meant that Creation would no longer be distributed through AiG-U.S., the prospect of continuing subscriptions through the provision of a brand-new, culturally relevant, apologetics-based periodical (with an enhanced worldview emphasis) was exciting. AiG-U.S. was also very encouraged to learn of the excitement generated about the new magazine as expressed by overwhelmingly positive feedback from its subscribers.

For the most part, the settlement appears to be a victory for Ham, but this month there's evidence of the sop that CMI received to assuage its misery. AiG has used its mailing list to send a complimentary copy of the current Creation magazine to anyone who used to receive it from AiG before 2007. A cover note on AiG letterhead tells the story in nicely neutral language:

We have been asked by Creation Ministries International (“CMI”) of Australia to provide you with a complimentary copy of its Creation magazine. As a former subscriber to it, you may want to know that you can re-subscribe to the same publication through CMI, whose contact information is inside the magazine. Creation continues to be published by that Australian organization.

We hope you enjoy it.

Now that CMI and AiG no longer need to waste precious resources on their long-running legal battle against each other, they can join ranks and present a united front against the evolutionary foe. Surely Darwin's legacy is now doomed!

I know because I read it in the pages of Creation magazine. Or perhaps it was Answers magazine. They're actually difficult to tell apart. But they agree on one thing: the theory of evolution is about to collapse. Its defeat is imminent, just as it has been for several decades.

Oh, and Jesus is due to arrive any second now.

anyone know where i could find coupons?
thanks,