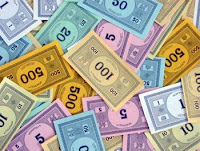 Fox News published an article today about President Obama's participation in Notre Dame's commencement exercises. The title was “Obama's Honor Puts Notre Dame's Catholic Standing at Risk,” but the actual article was obsessed with money. (Money in the temple?) Here's the key paragraph:

According to organizers of ReplaceJenkins.com, a Web site critical of Notre Dame President Rev. John Jenkins' decision to host President Obama, more than 1,400 pledges have been received from alumni and donors promising to withhold future donations, a tally of nearly $14 million.

It doesn't surprise me that Fox considers this to be a news item worth reporting. Fox News, after all, is more of a right-wing propaganda organ than a reporting service, so the factoid from ReplaceJenkins.com fits the company's agenda.

It's an amusingly entertaining claim: A website reports that more than 1400 disgruntled Catholics have generously racked up $14 million in non-pledges. When you're promising not to give money, it's amazing how easy it is to bid high. (It reminds me of the irate Republican donor who claimed he was withholding a million-dollar contribution from Caltech because of an “Impeach Nixon” sign.)

I know that my parents are dismayed at Obama's honorary degree from Notre Dame and I'm fairly certain they've signed their names to an on-line protest petition. But now I wonder. Do you think my folks also promised not to give Notre Dame a $50,000 contribution in the future? It's not like they ever gave the university any such amount in the past, but sometimes you just have to take a stand!
Posted by Zeno at 1:30 PM

How many of them refused to give ND money when Bush - capital punishment and an unjust war - spoke there?

It's a wonder ND gets an alumnae money at all!

That reminds me of a website that was created in reaction to the national republican senatorial committee's decision to support Charlie Crist in his bid to become senator. The website asked to promise not to donate any money to said committee. It's an easy enough promise to make.

No, it's perfectly true: they got pledges from 1,399 people and the founder of Domino's.

I mean, we understand averages around here, right?

Funny thing is, it could even be true.