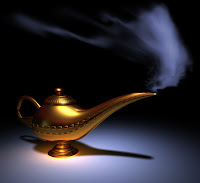 “Rob” was a good student, so I was unaccustomed to having him linger after class to ask questions. To make things even more unusual, Rob insisted on waiting till everyone else was gone from the room. Evidently he did not want any classmates to overhear his question. Rather tentatively, he voiced his query:

“Is it okay if I take our next exam a day early? On Thursday instead of Friday?”

Oh, no problem. I can answer that question easily: No.

I was, however, nice enough to give Rob a reason:

“Sorry, that's not possible. The exam doesn't even exist until the night before. I don't finish writing it till we've had our review session.”

In fact, I sometimes tweak an exam after I find out what students have questions about. If we spend a lot of time on a particular topic, I want to be sure that the topic is not neglected on the exam. For example, if my students want to work especially intensely on mixture problems, then I'm more likely to choose a problem of that type to include among the various application exercises on the exam. (And—I admit it—I don't worry too much about the likelihood that this slightly disadvantages the students who choose to skip the review session.)

Furthermore, I dislike the very notion of giving exams early. The student who gets special treatment by getting the exam in advance is obviously subject to the temptation to leak information to friends in the class. The less opportunity for that, the better.

Rob seemed to be surprised by my answer. Perhaps he had had instructors in the past who wrote all of their exams at the beginning of the semester. Not me. I'm much more adaptive than that. Or less farseeing.

Rob was also dismayed by my answer.

“It's not really my fault, Dr. Z. I got tickets to a concert before the semester started, and I wasn't expecting to enroll in a class that met on Fridays.”

“Nevertheless, that's what you did, Rob. The conflict is of your own making. You have a conflict between our exam date and the concert date. I don't have a good way to accommodate that and it's not my problem to resolve it anyway.”

“Well, could I take the exam later? Would that be okay?”

“Sorry, Rob. Think about it. I post the solution key on-line right after the exam. I'd have to withhold it from your classmates all weekend and leave them in suspense so that you could be accommodated. They wouldn't get the answers until Monday, until after you've taken the exam.”

The conversation ended soon after that.
Posted by Zeno at 9:00 PM

FWIW: When I was in grad school (and already married), a mid-term exam in one of my Math courses fell on my wedding anniversary, which, long before the exam schedule was announced, my husband and I planned to make special (he was able to take the day off work, while I had only one other class that day, in the AM). So I approached my professor -- I was among the top students in the class, had done well in a previous course he'd taught, so he knew I was not prone to conning -- explained the situation truthfully, and he consented to give me the exam the day before (I believe he'd written it just the night before, for the same reasons you prefer to wait, Zee). As it turned out, the test required every last minute of the allotted time even for a top (slightly older, more responsible) student like me to complete, so the professor decided that one of the proofs would then constitute an extra-credit for me and the rest of the class. As he commented afterwards, I basically served as his guinea pig. BTW, why on earth would someone who takes an exam early tell classmates what's on it, because that info would have the potential of raising the class curve, to the early-taker's detriment.

BTW, why on earth would someone who takes an exam early tell classmates what's on it...

Since I don't curve my grades, no one would have to worry about helping fellow students improve their scores. Sneaking information to a friend would boost the friend without penalizing the leaker. And, as Tualha pointed out, advance information can be a profitable commodity.

Sigh. I wasn't suggesting you would, Kathie. You asked the question in generic form, I answered it as such.

Am I the only person here who thinks the non-word, illegible captchas need to go? Arrgh.

Having just graduated with an MS (Zeno! I finally graduated!), I attended classes where professors ran the gamut of being super-liberal in rescheduling exams, to more in line with Zeno's policies. (OTOH, I attended a school with a significant number of older students, so it wasn't that unlikely that a professor might get a panicky phone call along the lines of "I can't make it to the exam! My babysitter's sick and I have no childcare!"

The worst early-exam fiasco I saw was the year we cancelled geology summer Field Camp for lack of enough students. Arrangements were made for those who did need Field Camp that year to graduate, to take it at another school. However, their Field Camp headed off into the wilds of Nevada the day our final exam week started! We had half a dozen or so students taking early exams -- some taking three a day -- the last week of classes. Hard on students and instructors. The instructors rallied admirably, at least in the geology department; I think the Dean was involved in encouraging an instructor in another department to give an early exam.

The fact that California State University students, in their final year, are STILL taking required lower-division math and science courses (because it takes upper-division enrollment status or extreme luck to get into them) is a whole other issue. Grrrrrr.....

Congratulations on the degree, Karen!

As a rule, I am firm in my opinion that it is presumptuous and disruptive for a student to ask to take an exam early. However, a special accommodation for a student who is otherwise reliable and does not usually ask for exceptional treatment might be possible in cases where (a) sufficient notice is given and (b) the situation is genuinely exceptional. Hence I have made arrangements to assist students who have military exercises, delivery dates (one occurred recently), or significant family obligation (great-grandmother's out-of-town 100th birthday). Tickets to a musical event are unlikely to rate such consideration, however. (It's not like we're talking about a reunion of the surviving Beatles.)

Zeno, a reunion of the remaining Beatles would NOT be a good reason to reschedule an exam; it would be a giant letdown to all involved.

A giant letdown? Muscially, perhaps. But I figure there'd be an excellent chance that Ringo would lose it and take a swing at Sir Paul.

I don't work in a university, and my students are mostly active-duty military or government civilians, which means that with some frequency I have people needing to make up the final session or exam (depending on the course). On the other hand, it's trivially easy for me, given my courses (advanced translation), to provide them with a completely different text to translate than the others will get (or did get).

ps - I'm so pleased you don't grade on the curve. I've always hated the idea that what grade you get depends on which section of a course you took ...

pps - No, Tualha, you are not. I've had to ask for a new one twice just now. When they aren't actual words, the really warped ones can be impossible to make out.

I once asked to take an exam early so I could go to NYC and shop. The professor agreed.

(I was an A student, we got along, and more importantly she was already giving the exam early for a different student with an actually good reason. She would not otherwise have agreed, and when I asked I didn't actually expect her to. I was delighted that she said yes, though, and I did find the formal dress I needed.)

Some years ago the final exam of the subject I was teaching was set to a Saturday morning. One week before the exam I received the visit of a student asking if he could do the exam on another day. He then told me he belongs to an adventist sect of some kind and they are not allowed to work on Saturdays (ok, he didn't use the word sect but that's what I heard). I suppose I don't need to tell you what I answered him...

JP, was the course also held on a Saturday? (If so, that'd have been a different kettle of fish).

Assuming not, however, then here in the US the law would require "reasonable accommodation" -- and while I don't believe in the 7th Day Adventist religion myself (obviously), it IS a lawfully recognized religion with all the legal protections pertaining -- pretty sure there's case-law defending their right not to work on Saturdays, which is their Sabbath (curious how the Portuguese for Saturday is "sábado," huh?). Sounds to me as though your student met the American standard for having his request fulfilled.

BTW, my (non-religious) husband routinely makes such accommodations on religious grounds for students every semester, whether for Jewish holy days (e.g., Rosh Hashannah, Yom Kippur, the first day or two of Passover), Good Friday (not a holiday at his university), etc. He has always found such students to be appreciative of his consideration of their beliefs.

Perhaps the academic culture WRT this is different in Europe?

Kathie,
It sure is different here. Religion is a private matter and nobody can ask for special privileges based on his/her religion. The course was not held on Saturdays but the exam period lasts only for a couple of weeks and there must be a minimum of 48 hours between exams. It would be impossible to do them all if Saturdays weren’t used, besides it wouldn’t be fair to the other students.