Nobody here but us chickens

The president of the United States is taking full advantage of social media to promote his political initiatives and his campaign for re-election. It's a natural evolution of his successful 2008 strategy, which included a strong Internet presence. The Obama campaign has an extremely active Facebook page titled “I will vote for Obama in 2012.” The site is routinely updated with miscellaneous items covering a wide range of topics—from supposed general interest to specific campaign pitches. The site's wall attracts comments from supporters and the occasional dyspeptic opponent. The Republican candidates come in for a generous portion of abuse and ridicule, but that's understandable when they constitute such easy targets. 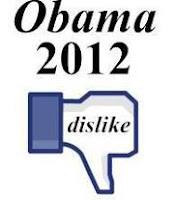 There is, of course, a diametrically opposed Facebook page. Someone was inspired to create the highly original “I will NOT vote for Obama in 2012.” The limitation of ALL CAPS to only one word shows a restraint not always displayed by the site's enthusiasts. You can find the usual sludge pile of birth certificate nonsense, crypto-Muslim speculation, wounded religious privilege, and shallow anti-government rhetoric. Overt racism, of course, is all but absent. It's merely the pervasive subliminal backdrop to the entire site, occasionally visible when the mask slips.

Consider the state of mind that prompts an American citizen to write this complaint (with multiple uses of [sic] understood):


This man just today put out a call for all African Americans (Negro) to vote for hime because he is black. Can we say white people should vote for white people because they re white.

“Negro”? She really thought it necessary and appropriate to insert a parenthetical Negro to explain the meaning of “African American”?

Can you say crazy-ass racist white bitch? Not that you would, of course. Nor would I. I'm sure it was just a tiny Freudian slip at the keyboard. I mean, it's not as though she wrote the dreaded N-word. Still, it speaks volumes.

Did the other commenters on the site call her out? Did they gently say, “Oh, sweetie pie, you shouldn't use an outdated racial term like that. It'll cause unnecessary offense and distract from our political message”? Heck, no. They immediately piled on with a string of complaints about how they're upset as being viewed as racists.

Hmm. There could be a reason they're viewed that way. 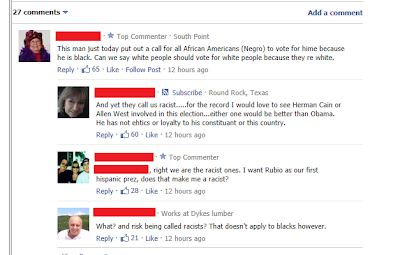 Facebook? I expected your account to be littered with last-minute student apologies and appeals of contrition. I don't have facebook, and I must admit that I have never encountered real people with such charming views. (Perhaps it's time to widen my social circle?) But facebook does test the notion of 'internet balls'. Although it's the internet, you're certainly not anonymous. It's the only arena where actual people maunder unremittingly that kind of incendiary drivel ... Anyway, I must be violating some internet convention since I'm babbling now ...