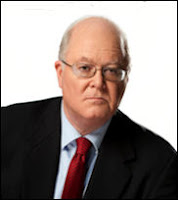 The funniest message in my in-box this week was from the Catholic League. I started laughing the moment I saw its title in my list of the day's e-mail: “Obama pushed us too far.”

Resident Catholic League curmudgeon and president Bill Donohue was putting President Obama on notice that mandates for birth-control coverage would spark heated opposition from the Catholic League and its allies, especially if they could succeed in tarting it up as an assault on religious freedom. The risible part is obvious, right? Donohue and his ilk enlisted in the spittle-spraying opposition to Obama a long time ago. How is it even possible for Donohue to be “pushed too far” when he is already the fringiest of the nation's nutcase right wing?

Of course, Donohue is making the argument that Obama has overreached in such a way that the extremist Catholics now have a host of new allies:


We have been inundated with support from Protestants, Jews, Mormons, and others. When the federal government seeks to impose a radical secular agenda on religious entities, denying them the right to exercise their doctrinal prerogatives, it is trampling on the First Amendment rights of the faithful.

I have no doubt that Donohue's phone has been ringing off the hook in a gratifyingly cacophonous way, but how many of his callers were ever Obama allies in the first place? (Hint: Approximately zero.)

While I have every intention of voting for Obama's re-election this year, I have never numbered myself among his most enthusiastic supporters. Simple  realpolitik, however, makes it clear that a second term for the president is the best outcome we can hope for when the alternatives are either hollow men like Romney, egomaniacs like Gingrich, or religious fanatics like Santorum. A Republican administration headed by any of the current candidates would almost certainly destroy support for civil liberties in the Supreme Court for a generation, while more Obama appointments like Sotomayor and Kagan would keep hope alive (or actually increase it, if we were so fortunate as to witness a retirement by Scalia or Thomas).

The president compromises too quickly and too much in too many cases, in my humble opinion, and is a much greater fan of incrementalism than I am (health care public option, dammit!), but all the steps in the right direction, large or small, will be swept away if Obama is defeated. The current hyped-up controversy over birth-control coverage appears to be yet another instance of the president advancing a policy and then quickly backing away from it. I've seen plenty of muttering about this new example of Obama's unwillingness to stick to his guns. This time, however, I wonder.

Although the Catholic bishops and Donohue are chortling over the supposed rebuke to Obama's new healthcare initiative and whining that his hasty retreat doesn't go far enough, it's not clear to me that the president has suffered a defeat. While practical questions of implementation remain, Obama's revised policy includes two strikingly opposite key features: (1) an opt-out option for religious employers who oppose contraception and (2) free coverage of contraception for the employees whose employers opt out. There is, of course, dark muttering about how the “free” coverage will be absorbed (or “hidden”) in the costs for basic healthcare packages, but the president now gets to claim that he addressed the bishops' concerns without revoking the basic mandate of birth control coverage for everyone.

That latter point is undoubtedly something that will rankle the Catholic League and other anti-contraception fanatics. Let's not forget, however, what a small group this is. We're not even talking about abortion here (although Donohue will blusteringly disagree). We're talking about things like The Pill. Plenty of people—even those who describe themselves as pro-choice—have some qualms about abortion. Very few, however, see any problem with ready access to birth control pills. Obama's strategic retreat aligns his administration with birth-control coverage policies in many states while reminding the nation at large that the Catholic League and the bishops do not represent them.

The cost of the birth control will be born by the insurance companies, not the churches, etc, that are buying their policies. But the kicker is that the government mandate actually *saves* money, or should, for the health insurance companies, because paying for birth control is a hell of a lot cheaper than paying for babies being born. It's a win-win.

And what about the fact that something like 95+% of Catholics have used some form of non-Catholic birth control. What the hell is the church screaming about? What? Why do you assume I'm not a Catholic.

Seems that the Catholic Church hierarchy is using this as an opportunity to try to get the Federal government to enforce a policy that it fails to get the vast majority of its own female membership to observe. Establishment of religion, anyone?

And isn't it curious that conservatives harangue against large, highly-centralized bureaucracies when they're governmental, yet the Catholicism's is aces with them?

Comprehensive health care for women includes control of a woman's reproductive cycle and all the other female-only afflictions (ovarian cysts, endometriosis, etc) that are thus kept under control. It doesn't matter how many Catholic women have used it; it doesn't matter that the Catholic church has problems with birth control.

It's basic female health care, people. Get over it. You don't believe in it? Don't use it!

Children are supposedly a gift from God, but he can't tweak the pill-controlled hormones to bestow the gift? Hell, I bet Odin could beat him on that criteria...

Did you see Donohue's war a few years ago on -- can you believe it?!? -- Will Shortz? Heck, I remember solving that puzzle, and found nothing offensive about the clue, but Donohue did. He seems to lead his life in search of offenses over which he can then squeal like the proverbial stuck pig (in hopes of raising funds for his cause, one supposes).

"The Crossword War on Christianity":
http://www.ooblick.com/weblog/2007/12/04/the-crossword-war-on-christianity/