Odd man out in the cold

John Christy's research paper made it into the news media. Most scientists get to work in obscurity, but climatologists garner more attention from the press than your typical researcher. Especially if, as in Christy's case, you're going against the flow. That's news.

But not really. Not in Christy's case. It's not at all surprising—or particularly newsworthy—that he's going against the flow.  He does it all the time. While Dr. Christy is an honest-to-goodness climatologist with real credentials (unlike, say, Lord Monckton or John Coleman), he is avowedly skeptical about anthropogenic global warming. That makes him a precious resource to the climate-change denialists, since the vast majority of climate scientists hold that humanity is a key factor in the warming of the earth. What the denialists tend to ignore, however, is that Christy has no doubt about the warming trend. He agrees that the earth is heating up and that straightforward temperature measurement has established that fact. Christy just disagrees that humans have anything in particular to do with it.

The people chortling about the cold snap in Europe as disproof of the global warming prefer that you not listen to Christy in that case. The denialists can't be too choosy, however, so they'll clutch Christy to their bosom despite his unwillingness to embrace the warming-is-a-lie hypothesis. Besides, he just gave them something useful to cite.

As reported in Wednesday's edition of the San Francisco Chronicle, Christy has concluded that California's Sierra Nevada has remarkably resilient snowfall. He has analyzed snowfall data back into the 19th century and determined to his own satisfaction that snowfall on the Sierra's western slope has been consistent for well over a century. In particular, he sees no sign that Sierra snow has been on a downward trend during the recent half-century in which global temperatures have been inching upward.

His conclusion, though, is a bit of a puzzler. First of all, Christy apparently used snow depth rather than snow water content for his analysis. Critics like Mike Dettinger of the U.S. Geological Survey declared that water content and snow density are crucial factors that should not be ignored. In addition to Dettinger's concern, cited in KQED's Climate Watch, Professor Roger Bales of UC Merced said, “It’s not surprising he didn’t find a trend because he lumped everything together.”

Then, of course, you have the graph of Christy's data, represented by a graph published by LA Weekly. It bears the label “Journal of Hydrometeorology” and is therefore presumably the graph from Christy's recently published research paper. Give it a good look. I haven't seen the paper itself and I do not know whether Christy did any kind of regression on the data to check for trends, but the dark line of moving averages spends less and less of its time above the 1.0 line as the years go by. Was I not supposed to see that? 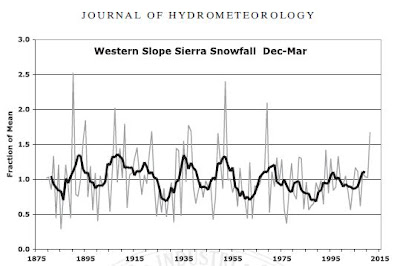 Are you suggesting that any graphed data with a visible trend, no matter how great or slight, is automatically statistically significant? I do not dispute the importance of combating climate ignorance, but taking the easy route while doing so only lends ammunition to the detractors.

Also your recapcha seems to hate me.

No, not at all. It's merely suggestive. And rather amusing.

It's suggestive, but really doesn't show enough of a trend to draw a conclusion from. I don't know much about climate science, but I do know that northern/central California's weather (including the Sierra snowpack) is highly influenced by the variations in the giant weather cycle known as the El Nino - Southern Oscillation. The real question is whether the Sierra snowpack can shed some light on that.

I also notice he only uses Dec-Mar data. Isn't that stopping a bit early?

Proofread before posting. I meant to say, the real question is whether the Sierra snowpack can shed some light on how global warming affects the ENSO.

It was easy to find pointed criticism of Christy's paper on-line, but the paper itself I did not find. Absent a look at Christy's actual data, we can't tell for certain how flaky his analysis is. Since he's arguing that the snowfall is holding steady, the null hypothesis is his friend.

I'm Australian, so I'm still convinced snow itself is a hoax. Probably perpetrated by kids looking to get out of school.

Anonymous Aussie, I never saw snow fall till I was 21. Trust me, it's at best highly overrated, at worst an obstacle (or, although it's never happened to us, it can even be life-threatening) :-(

"Are you suggesting that any graphed data with a visible trend, no matter how great or slight, is automatically statistically significant?"

Perhaps if the author had bothered to do the regression analysis and told us the result, we wouldn't have to guess whether there's a trend or not.