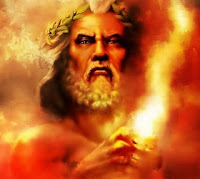 The media are full of stories about the tenth anniversary of the 9/11 attacks. Without the slightest hint that they are aware of the irony, Christian extremists are eager to lay special claim to the various memorial services. For example, Catholic League bully boy Bill Donohue is furious that New York City's official commemoration event will not feature religious observances. In classic Donohue fashion, he says that we should demand to know “why Bloomberg decided to censor the clergy from speaking at the 9/11 memorial ceremonies this Sunday.”

“Censor”? Donohue clearly does not understand the word. Bloomberg is heading up a secular municipal government ceremony and decided that sectarian prayers did not belong at such an event. No one, however, is “censored.” The various priests, rabbis, ministers, imams, and snake-handlers are free to conduct as many worshipful memorial services as they like—whether or not Bloomberg thinks it's a good idea. Donohue, however, would like a nice Christian—preferably Catholic—prayer at the event and might even settle for some words mumbled by a rabbi. He still can't get over the idea that religious faith is not as privileged in our society as it used to be. (The secularists who left God out of the U.S. Constitution might be smiling, if only there were an afterlife.) The 9/11 perpetrators shouted prayers of their own; how odd that some people think the main problem is that it simply represented fanatical devotion to the wrong religion. So we need more prayers—of the right kind. (Thank God for the absence of religion-driven violence among Christians!)

Catholic Radio has certainly not been intimidated by Mayor Bloomberg into avoiding the topic of 9/11. They appear not to have noticed the supposed censorship (although I'm sure at some point one of the EWTN programs will point a microphone at Donohue and allow him to complain in public about what he calls the mayor's “gag order”). Just this afternoon I heard a snippet of a program in which a man was interviewed about the way in which religion comforted him on 9/11. This particular individual made his way to St. James Church, where he found solace. Soon afterward, he visited another church: “One of the great things about New York City is that there are churches everywhere!” he told his interviewer.

Then he said, “I felt the presence of God all day on that day.”

I pondered that for just a moment, then realized he was making excellent sense if his God was the deity of the Bible. The God of the Bible is particularly fond of mass murder, whether by his own hand or at his instigation. Such a God would, of course, show up for the slaughter in the Big Apple. He probably brought popcorn, too, because nothing seems to please the Lord as much as a nice splatterfest. Just consider: 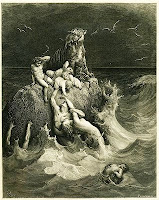 “And the Lord said, I will destroy man whom I have created from the face of the earth; both man, and beast, and the creeping thing, and the fowls of the air; for it repenteth me that I have made them.” (Gen. 6:7)

“Now go and smite Amalek, and utterly destroy all that they have, and spare them not; but slay both man and woman, infant and suckling, ox and sheep, camel and ass.” (1 Sam. 15:3)

“Is not this David, of whom they sang one to another in dances, saying, Saul slew his thousands, and David his ten thousands?” (1 Sam. 29:5)

“And when he had removed [Saul], he raised up unto them David to be their king; to whom also he gave their testimony, and said, I have found David the son of Jesse, a man after mine own heart, which shall fulfil all my will.” (Acts 13:22)

Be advised: If your kill ratio is too low, God will oust you and find someone more likely to slake his thirst for blood. 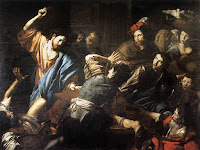 I am certain that many Christians would hasten to point out that the above quotes are either from the Old Testament—when God was more of a bastard—or from a New Testament verse that looks back to Old Testament lore—since in Acts the reference is to King David. I find this unpersuasive. First of all, it's not as though Jehovah God of the Old Testament lost his re-election campaign and was replaced by a kind and loving turn-the-other-cheek Jesus Christ in the New Testament. It's an article of faith with Christians that it's all just one (triple-headed) God. Thus the Christian deity can't escape responsibility for mass murder in the Old Testament. Second, Jesus was all too happy to implicate himself:

“If any man come to me, and hate not his father, and mother, and wife, and children, and brethren, and sisters, yea, and his own life also, he cannot be my disciple.” (Luke 14:26)

It is sometimes said that Christianity is a “religion of peace.” Actually, it sounds like Homeland Security should keep a closer eye on those who take their God's advice a little too seriously. It's only a quirk of translation that “jihad” is not in their book.
Posted by Zeno at 5:00 PM

Very well done. Peace be with you. blackoaknaturalist

In the last decade we've crept ever closer to a police state; the death toll of servicepeople and civilians in two unnecessary wars makes 9/11 pale by comparison; the Dominionists are leading at the polls right now, and the President has no backbone.

My country has blood on its hands and civil rights underfoot, and it's going to get worse. This is the REAL legacy of 9/11.