One of the buttons on my car radio is set to the local Catholic station. I punch it occasionally to see what my former co-religionists are up to. There aren't many surprises these days. Catholic radio is little more than an extension of the nation's extreme political right, an environment in which someone like Alan Keyes is considered a credible and worthwhile guest. It's convenient to sample the broadcasts in small doses until I reach the limits of my endurance and punch the news-radio or classical-music button.

One of Catholic radio's most recognizable voices belongs to Father John Corapi. His acidic baritone drips with contempt as he excoriates those who are supposedly corrupting modern society and exhorts his listeners to take up cudgels in defense of morality, purity, virtue, and motherhood. Corapi lays it on pretty thick. He likes to beat his breast about the sins of his youth and to offer himself as an example of overcoming one's personal demons. If he could do it, so can you! Fr. Corapi has no patience with lame excuses for not taking up one's cross and joining the church militant in the ongoing culture war.

It happens, however, that I am wrong to use the present tense. Corapi disappeared from Catholic radio during the spring and has now withdrawn from public ministry. His religious order has deemed him unfit to discharge priestly duties. The Society of Our Lady of the Most Holy Trinity—which uses the acronym SOLT—was not restrained in its rebuke of its wayward son: 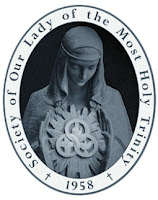 From: Rev. Gerard Sheehan, solt Regional Priest Servant Society of Our Lady of the Most Holy Trinity Robstown, Texas

Fr. John A. Corapi submitted his resignation from the Society of Our Lady of the Most Holy Trinity (“SOLT”) early in June. SOLT is a Society of Apostolic Life of Diocesan Right with its regional office in Robstown, Texas.

While SOLT does not typically comment publicly on personnel matters, it recognizes that Fr. John Corapi, through his ministry, has inspired thousands of faithful Catholics, many of whom continue to express their support of him. SOLT also recognizes that Fr. Corapi is now misleading these individuals through his false statements and characterizations. It is for these Catholics that SOLT, by means of this announcement, seeks to set the record straight.

A woman, well known to Fr. John Corapi, mailed SOLT a signed letter detailing allegations of Fr. Corapi's sexual activity with adult women, abuse of alcohol and drugs, improper sacramental practices, violation of his promise of poverty, and other wrongdoing.

After receiving the allegation, SOLT formed a three person fact-finding team to ensure that it handled this matter in accordance with canonical norms. The team included a priest-canonist, a psychiatrist, and a lawyer. Two were members of religious orders, and one was a lay Catholic. Two were men, and one was a woman. All three have national reputations and substantial experience in ecclesiastical processes related to priest disciplinary issues.

As the Society was engaging this team, Fr. Corapi filed a civil lawsuit against his principal accuser. He contended that she had defamed him and breached her contract. The contract, according to Corapi's lawsuit, contained a provision binding the woman to silence about him. He offered the woman $100,000 to enter this agreement.

When the fact-finding team asked Fr. Corapi to dismiss the lawsuit, to forbear from foreclosing his mortgage, and to release her and other individuals from their contractual obligations to remain silent about him, he refused to do so and, through his canonical advocate, stated: “It is not possible for Father Corapi to answer the Commission's questions at this time.”

SOLT's fact-finding team has acquired information from Fr. Corapi's e-mails, various witnesses, and public sources that, together, state that, during his years of public ministry:

He did have sexual relations and years of cohabitation (in California and Montana) with a woman known to him, when the relationship began, as a prostitute; He repeatedly abused alcohol and drugs; He has recently engaged in sexting activity with one or more women in Montana; He holds legal title to over $1 million in real estate, numerous luxury vehicles, motorcycles, an ATV, a boat dock, and several motor boats, which is a serious violation of his promise of poverty as a perpetually professed member of the Society.

SOLT has contemporaneously with the issuance of this press release directed Fr. John Corapi, under obedience, to return home to the Society’s regional office and take up residence there. It has also ordered him, again under obedience, to dismiss the lawsuit he has filed against his accuser.

SOLT's prior direction to Fr. John Corapi not to engage in any preaching or teaching, the celebration of the sacraments or other public ministry continues. Catholics should understand that SOLT does not consider Fr. John Corapi as fit for ministry.

Corapi's resignation from SOLT effectively terminates the order's investigation into its former member. Unless civil authorities take an interest in possible criminal behavior, the nature of which is unclear, Corapi can pursue his lawsuit against his accuser without interference from SOLT or any ecclesiastical body.

At this point, Corapi is still a priest, although one without a formal affiliation with any religious order. Under those circumstances, it is difficult for him to function as a cleric within the Church's hierarchical structure. He insists, however, that he remains a faithful Catholic and has issued a string of statements and denials of wrongdoing on a new blog, where he styles himself “the Black Sheep Dog” of the Church. Demonstrating his possession of a tin ear, he offers a Clintonesque denial of the charge of sexual impropriety:


I have never had any promiscuous or even inappropriate relations with her. Never.

Corapi also assures visitors to his blog that he still sees himself as having a vocation:


Wherever justice is subverted in the name of expediency, or through abuse of authority truly freedom-loving people should raise their voices against it. There is no shortage of such causes today. In the future the Black Sheep Dog will be doing what he can to sound the alarm and exhort the troops.

Now if he'd abused children sexually instead, he might still be at his pulpit and microphone today.

SOLT writes, "He offered the woman $100,000 to enter this agreement" and "He holds legal title to over $1 million in real estate, numerous luxury vehicles, motorcycles, an ATV, a boat dock, and several motor boats, which is a serious violation of his promise of poverty as a perpetually professed member of the Society."

Wasn't SOLT keeping an eye on his finances before now? Surely Corapi didn't accumulate all that much overnight.

Oh, heck. They didn't feel like they had to keep an eye on him. He took a vow!

Silly bugger. Let's hope he's learnt his lesson and sticks to diddling the kiddies in future.

Really not cricket of him to bring The Church into disrepute like this.

While I realize that not all temporal proximities are significant, do you think it relevant that SOLT was founded in 1958, the year Pius XII died (inasumuch as the old man's death was hardly unexpected)? Is SOLT a group that supports or opposes Vatican II reforms (which they may have anticipated)?

Might the following be a source of Corapi's wealth? If so, I don't begrudge him the award, although that still doesn't justify misusing it, or even keeping it in violation of his poverty vow, of course.

Corapi filed a qui tam False Claims Act lawsuit against Redding Medical Center cardiologist Chae Hyun Moon after Moon informed Corapi in 2002 that he was in immediate need of triple bypass surgery, but then told Corapi that the procedure could wait three weeks. Corapi decided to seek other medical advice and it was found he had perfectly clear arteries. Corapi ultimately went to the FBI and filed the suit that was the basis of an FBI raid and a multi-year investigation into Moon's practice.

The United States Department of Justice reached a settlement with four cardiologists and Tenet Healthcare, the owner of Redding Hospital, during 2005, in part due to Corapi's initial complaint. Three physicians settled for a total of $24 million USD. Moon, the target of Corapi's lawsuit, paid $1.4 million USD and agreed to never perform cardiology procedures or surgeries on Medicare, Medi-Cal or Tricare patients. Moon's medical license was eventually revoked in 2007 for gross negligence, among other charges.

Corapi was awarded $2,712,281 USD for his role as a whistleblower in the False Claims Act Lawsuit as well as the $500,000 USD he and his friend were awarded for the insurance case they filed. His involvement as a whistle-blower in the federal investigation of the practices in the Redding Medical Center played an important role in Stephen Klaidman's non-fiction book Coronary.

This guy would make a great poster-priest for attracting more men to the priesthood. I mean, how many men wouldn't respond to a job that promises:

...sexual relations and years of cohabitation with a woman known to him as a prostitute; abused alcohol and drugs; sexting activity with one or more women; over $1 million in real estate, numerous luxury vehicles, motorcycles, an ATV, a boat dock, and several motor boats.

Yeah, baby, poverty and celibacy in THE NEW CATHOLIC CHURCH!!! ain't what they used to be.

Besides, as Kathie pointed out, it's not as if he went out and lusted after great wealth. He was showered with money as a result of the lawsuit. What's a guy to do?

Gene logically asks, "He was showered with money as a result of the lawsuit. What's a guy to do?"

Uh, give it to the church as part of his poverty vow? No, you say? Silly me...