The more-Catholic-than-the-pope fringe of Roman Catholicism is faithfully represented by the ultra-ultramontanes of RealCatholicTV, where Michael Voris shares his overweening smugness in a series of videos titled The Vortex. In recent installments he has decried the collapse of Catholicism in Ireland and reported that contraception has brought humanity to the edge of destruction. Voris would not know the meaning of “subtlety” if it hit him in the face with a sledge hammer forged in the white-hot intensity of a million suns. His antics would seem to put him beyond parody, but nothing daunts the truly brave humorist.

Enter Steve, the eponym of Steve Likes to Curse, a blog of peculiarly skewed and irreverent humor. This month he's unveiled a series of Vortex parodies that are wickedly on target. Sporting a helmet-hair wig every bit as authentic as Voris's and styling himself “Michael Whirly, B.F.D.,” Steve presents The Whirlpool (“where fibs and fabrications are pulled under and drowned”). Check out his denunciation of atheists (“stupid retards who only care about fornicating with members of their own sex and smoking drugs”). 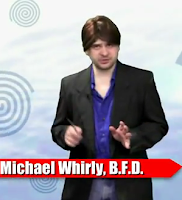 Keep an eye on the background animation for the floating washing machine. Then take a look at some of his other videos. He sincerely pities “those silly Jews” and their “obsolete” religion. Consider how specifically he cites scripture as he lusts for an opportunity to stone Emma Watson as a witch. At least, I think stoning is what he wants to do to her. It is a wonder to behold.

Perhaps you have never wasted precious minutes of your life watching Steve's original inspiration, the egregious (I was going to say “inimitable,” but that obviously no longer applies) Michael Voris. You can get a rush of schadenfreude while marveling at the accuracy of Steve's portrayal as Voris wrings his hands and laments over the sorry state of the modern Catholic Church. (Steve does look down a bit too often at his cue cards, I admit, but he also doesn't flub his lines quite as often as Voris either. It's a trade-off.)

One thing does, however, confuse me. Steve says he has just observed his blog's fifth anniversary, but has yet to attract much notice:


After five years, the first four of which I posted at least one article a day, every day, Steve Likes to Curse’s popularity and exposure are still minimal. On a good day, this one gets around 100 hits. Most days it gets between 40-50. And yet this quiet little website of mine has changed my life. What must it be like for someone whose blog gets thousands of hits a day?

Something is wrong when a treasure trove of humor like Steve's blog gets so few visitors. Go give the nice man a little love.
Posted by Zeno at 11:30 AM

I think that Voris guy should add a line to the end of his silly Vortex vids saying "No muscrats were injured or killed in the making of this hideous hairpiece".

Perhaps no muskrats were injured or killed, but I strongly expect some kind of rodent had to suffer so that Voris could live his dream.

Mr. Voris' stand up routine was awesome at first. I laughed my ass off over his "What the world needs, is a beneficial catholic theocracy" video. After that, his video quality sort of went down hell. Catholicism really just isn't all that funny...


PS. Voris is a first class asshole who makes my brain hurts with his lack of historical knowledge

"...contraception has brought humanity to the edge of destruction..."

I'm a tad confused here, because I assume Voris believes that increasing the population is a good thing, rather than destructive, and that no matter how many people there are, "[deity] will provide." So he ought to be elated nowadays, right? After all, the news reported last week that the world's population is approaching 7 billion people; obviously that represents a whole lotta NOT using contraception (or improperly or inconsistently using it).

Well then, you don't suppose Voris is a closet tree-hugger, concerned that burgeoning population can cause destruction of the environment? Nah, didn't think so. My hunch is he's got his knickers in a twist -- which, incidentally, sounds like a great form of natural contraception if ever there were one! -- because the segment of the population that most resembles his, um, identity, isn't reproducing as fast as others are.

First came across this guy on Dr. Myers’ blog. (Actually, that’s how I heard about you, too. Unfortunate irony there.) His videos always make me a bit ill. He clearly is restraining his joy when describing the torture that awaits the non-believers and not-Catholic-enough Catholics. I wonder how many times he had to re-shoot when he couldn’t keep his composure and burst into manic giggling. Also makes me wonder if the location of his website URL in the frame is something other than fortuitous.

Say, is that any relation to Wagner's "Rinse Cycle"?

(Yes, I realize that joke's old, old, old, but since you raised the topic a few posts back, it seemed à propos now).

Whenever I see a Voris video, I go through something akin to the stages of grief. At first I'm in denial that he could possibly be serious and I laugh heartily. Then I feel angry that he seems so pleased at the not-too-far-off infinite suffering of those not Catholic enough. Ultimately, I simply accept that he's completely off the beam. I then wonder how he has avoided being institutionalized for being stark raving loony.