The pope explains the Big Bang

Even many Catholics are confused by the concept of papal infallibility. Benedict XVI has put his foot wrong often enough so that anyone could be forgiven for thinking the current pontiff is just a bit off. Or a lot. But papal infallibility applies only to official doctrinal pronouncements. Not to anything else (which is surely obvious by now with this pope). Occasionally, however, the pope gets something sort of right.

Benedict has come forward with a straightforward pronouncement concerning the Big Bang. He accepts it! As far as he's concerned, cosmology's reigning theory for the origin of the universe is simply God's technique for initiating creation. In brief, nearly fourteen billion years ago God said “Let there be light” and the Big Bang happened.

Benedict's acceptance of the Big Bang naturally upsets the hardcore creationists who believe in a young earth, but it's welcome news to Catholics who want a little distance between themselves and their anti-science Protestant brethren. Forward-thinking Catholics can also take comfort in Benedict's sound logic, as illustrated in this morning's San Francisco Chronicle. God was behind the Big Bang for all the best reasons. 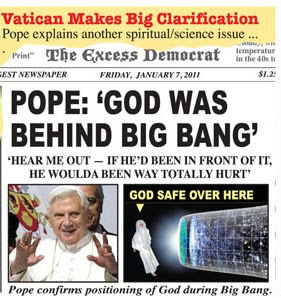 Hey, Zeno, there are plenty of Protestants out there who accept the Big Bang, Evolution, and science generally! It's just those noisy fundies who get all the ink, er, pixels.

Well, that's what you say, Kathie, but Ken Ham doesn't consider Protestants of that ilk to be good Christians at all. (I think he thinks he's the pope of Protestantism, which is a bit tricky to pull off.)

Well, Zeno, "Protestants of that ilk" probably don't consider that Ken Ham speaks for them either ;-) Indeed, Protestants tend to be of the view that their relationship with god is personal, one-on-one, rejecting the concept of (both literal and generic) papacy. At least that's what I got out of it before I bailed.

No doubt about it, Kathie. That's why there are so many thousands of competing Protestant sects. But I still remember with some indulgence the earnest Christian member of a lunch group I belonged to years ago who insisted that everyone agreed on the basic tenets of Christianity provided they read the Bible in the right way. It irked him that the words "right way" always caused me to break out in a grin.

One difference between Catholic and Protestant is that there are numerous Protestant denominations, indeed, with dogma and biblical interpretations ranging across the spectrum (as opposed to a single central infallible authority). In fact, a Unitarian once told me his church's minister admitted he wasn't sure he even believed in a god at all.

Unitarian-Universalist congregations are well-known hotbeds of disbelief. Many of them are more like humanistic social clubs than religious organizations. I see them as an effort to retain the social aspects of a church without the dogmatic content.

Which leads into the classic...

Q: What do you get when you cross a Unitarian with a Jehovah's Witness?

A: A knock at the door for no apparent reason.

And the other classic...

Q: What do you get when you cross a Unitarian with a Ku Klux Klanner?

A: Someone who burns a question mark on your lawn.