Quentin Crisp once gave some encouraging advice about maintaining one's residence: “There is no need to do any housework at all. After the first four years the dirt doesn't get any worse.”

I have occupied my current domicile for more than a quarter-century, so I'm well past that initial quadrennium. Unfortunately, I do not have Crisp's strength of character. Once or twice a year I feel compelled to do—or at least try to do—some serious cleaning. The big problem, of course, is the clutter created by my ever-growing collection of books and papers.

At the conclusion of every semester, I feel the pressure of the responsibility to tidy up after myself. Stacks of books need to be picked up from tables and chairs and floors (and any other surface that is at least approximately flat) and shelved (occasionally with some attempt at an organizational rationale). Stacks of papers need to be picked up from those same locales and sorted into the filing cabinets or recycling bins.

The room I call my library is usually an especially grueling undertaking. It has long served as my home's emergency reservoir, its pressure-release valve, a place where random items get shoved out of the way. The shelves of the library's bookcases are packed to overflowing—those shelves that I can see, anyway. The lower ones are obscured by stacks of miscellany. I recently made an effort to cleanse the Augean library.

A funny thing about housework: I sometimes find myself channeling my paternal grandmother, who was always tidy as a pin (whatever that means). Hands on my hips, I'll gaze into the turmoil of the library and say, “Credo! Tal lástima!” Loosely translated, it means, “Can you believe it? What a disaster!” Another good word is porcaria, which means filth and evidently owes something to pigs (porcos).

In this frame of mind, it's easier to get down to work, occasionally muttering Avó’s favorite imprecations to myself under my breath. It's just a little weird, but it's okay. Whatever works. But I noticed something the other day that gave me pause. 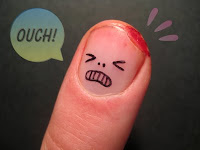 I dug my fingers under a stack of old school papers and tugged at it, preparatory to lifting it up and moving it to a desk for sorting. My right hand slipped and I received a sudden and sharp paper cut on my index finger. I cried out involuntarily, but I did not shriek “Ow!” or “Ouch!” What I said—rather loudly—was “Ai!”

I was in Portuguese mode and I used a Portuguese cry of distress. As I sucked on my finger, distressed but bemused, I pondered this curious occurrence. Cries of pain, you know, are reflexive. You don't think about them. You just say them. (Thus a painful mishap could give away an undercover operative in a foreign land.) I tried to remember if this had happened before, but I could not recall for certain. I imagine it was standard operating procedure when I was little and Portuguese was my principal language, but my childhood memories are not that detailed.

In graduate school a few years ago, I learned for the first time about code-switching, the blurring of the boundary lines between languages in the speech of multilingual people. For me, it was just a new name for a phenomenon I had long been familiar with. Sometimes we grind the gears in our language transmission box as we shift among the languages we know. Since English has long been my dominant tongue, I don't experience this as often as I did in my youth, but apparently it's still there. Or, at least, my first language remains so embedded in my nervous system that I can still use some elements of it reflexively. I just need to be in the right mode.

Grandma would be so proud. (But not about the state of my library.)
Posted by Zeno at 11:30 AM

I have two suggestions Zeno: Hire a housekeeper to come once or twice a month for a couple of hours. It's not the cleaning that's important, it's the pressure you'll feel to tidy up before the cleaner gets there. The cleaning will be an added bonus.

Thank you for your suggestions, Gene O'P, but hiring a housekeeper seems unlikely to occur. The pressure would be too much for me.

As for your second suggestion, I can tell you're just a jealous monolinguist. (Don't worry, though: my novel translates all of the interpolated Portuguese remarks in the dialogs.)

Zeno ~ Interesting that you slip into Portuguese less often. My father -- who spoke only German until he was 13 -- seemed to drift into German more frequently as he got older (and there were no signs of cognitive impairment -- other than those induced by being a biblical literalist).

What's also fascinating is that people with several languages will slip into their first foreign language when speaking their second - I well remember baffling Germans by nodding and saying "da da" instead of "ja ja" when getting directions. Probably other times, but since "da" means, roughly, "there" in German it would sound as though I wasn't understanding the directions I was getting!

I seem to have the opposite problem: it's as though my brain has two language channels, one for my native language (English) and the other for my latest language. Whenever I start learning a new language, it pushes out the old one!

I find myself experiencing what The Ridger mentioned. If I'm speaking Japanese and trying to remember a word I'll often come up with the German of that word instead, despite my spoken German being atrocious. For me, at least, I seem to switch into a "not English" mode as a first step to speaking/thinking in another language.

“There is no need to do any housework at all. After the first four years the dirt doesn't get any worse.”

As I'm currently in the process of dealing with the aftermath of renters who, evidently, didn't do any cleaning in the three + years they occupied the house, I'm prepared to accept this advise on one condition: if you own the house and intend to be cremated in it when you die. Otherwise, not.