Today's e-mail brings the latest issue of The Eagle from GOPUSA. The subject line is “From Tragedy to Pathetic Left Wing Attack.” It's all part of the right wing's duck-and-cover response to the unfortunate coincidence that someone in Arizona decided to put the GOP's eliminationist rhetoric into practice. They're hoping and praying that the “even-handed” national media will dutifully blame both sides for unseemly political rants, somehow missing the fact that “second amendment remedies” is a wholly-owned subsidiary of the teabagger crowd.

It's too bad that no one thought to proofread The Eagle more carefully before sending it out. Sure, they were careful to include the photo of the accused assassin with long hair (he's a left-wing commie hippie, you know) instead of a more current short-hair portrait (looks like a Young Republican!), but they overlooked the gun imagery in the advertisements of their sponsors. Oops! But hey, what father wouldn't want to discourage his daughter's potential dates by wearing a T-shirt with a rifle and cross-hairs logo? All in good fun! 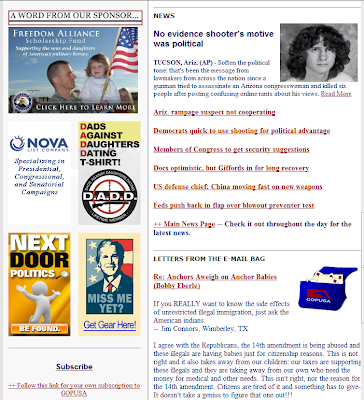