Listen to your mother

My grandmother had a base of operations. It looked suspiciously like a mere chair, overstuffed and tucked in a corner next to a window overlooking the farm, but it was really a kind of observation station. When she wasn't cleaning house, washing dishes, or attending to her invalid husband, Avó would be at her post. She might also be tending to her sewing or penning a letter to family back in the Old Country (the Azores), but nothing outside escaped her eyes. From her favored vantage point she could see the driveway that passed her house and provided access to the dairy barn and the workshop. The front of the barn was in her field of vision, as were the corrals next to the barn and the long haystack at the perimeter of the farm yard.

After my grandfather died, my grandmother became the senior partner in the family business. My uncle, however, did not deign to include her in anything but the most superficial discussion of his schemes and plans (some of which were spectacularly unsuccessful). Avó endured Uncle Ev's information-free visits with long-suffering patience, keeping a pot of coffee available so that he would have something to do with his hands while he mumbled a few pleasantries before dashing off about his (actually, her) business. 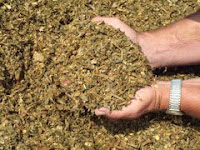 Farm life is characterized by routine. Twice a day the pumps in the dairy barn started up as cows were herded into the shower pens and the milking salon. The tanker truck arrived to take away the day's results at the same hour every evening (weekends included). The grandsons would feed the cows both morning and afternoon, pitching hay from a trailer into the mangers or driving the silage wagon to fill the mangers with partially fermented corn silage. Feeding was faster with the silage wagon than with the hay trailer because the wagon hooked up to the tractor's power take-off shaft and spewed out the silage without human intervention. My cousins strongly favored it.

Avó was used to the routine and quick to notice when it was disrupted. A small white pickup truck went cruising past her window. Some kind of company logo was on its door. The driver parked near the barn, climbed out, and began to wander around. Occasionally he jotted something down in a notebook. Avó kept an eye on the visitor, who eventually returned to his pickup and drove away. Uncle Ev came by for his afternoon cup of coffee, but said nothing about the visitor.

The process was repeated the next day. The small white pickup sat next to the barn while its driver wandered about, notebook in hand. This time he was still poking around when Uncle Ev dropped in on his mother. He was sipping his coffee when the white pickup drove past on its way out. Although Avó made a point of watching it leave, my uncle studiously ignored it.

The small white pickup made its appearance on three consecutive days and then was gone. My grandmother waited a few more days and decided she had waited long enough. It was time for direct action. If Uncle Ev refused to confide in his mother—the senior business partner, after all—then she would confront him.

She waited till he was halfway through his coffee before raising the topic.

Ev grunted and took another sip.

“Is he coming back soon?”

“Uh, he's finished. Nothing more to do.”

“I see. And what exactly was he doing?”

Uncle Ev sighed. His mother was trying his patience and it was unusual for her to be so insistent. He decided there was no harm in explaining what was going on. It wasn't as though it was a big secret. He simply feared that he might establish a precedent of consultation, which was sure to be a nuisance and certain to prolong his perfunctory filial visits. There was, however, a glimmer of hope. If he made the topic as boring as possible, he might discourage his mother from bothering him further about business.

“The man is a dairy consultant. He gives professional advice to dairymen.”

Avó was neither deterred nor satisfied. She pressed on.

“So what kind of advice? What was he doing here?”

Uncle Ev shrugged dismissively, as if it didn't really matter.

“Oh, I just asked his professional opinion on increasing milk production. That's all. It's a reasonable thing to do, right?”

Avó pursed her lips for a long moment.

Uncle Ev bobbled the coffee cup as he raised it to his lips, but it was almost empty and he didn't spill any of the contents. He sipped, swallowed, took a long, slow breath and set the cup down.

“Yeah, okay. Thanks for the coffee, Mom. I'll go talk to the boys.”

Avó watched her son leave, aware that she had upset him, but she didn't know that Ev had in his pocket a letter from the consultant. Along with a bill for a $1500 consultation fee was a report that told him he needed to feed the dairy cattle more dry hay and less corn silage. By contrast, his mother's unsought advice was free. And it came with a coffee service.
Posted by Zeno at 11:00 PM

Yeah, but it was his mother. What did she know? If he'd asked her and she'd told him that, he would have ignored her. So he deserved to have to spend the $1500.

I've seen that too often to really find it funny. Delicious, yes.

The same dynamic existed between my maternal grandmother and my uncle who ran the farm for her. Any suggestion Grandma might make was automatically ignored. But it seemed to her that if Uncle's farmer cronies down at the bar said the same thing, then it was a good idea. That may even have been true on occasion.

As you might expect, this had Grandma in a constant state of frustration. However, Uncle had the basics of small-farming in Minnesota well in hand, and he generally made good decisions. If he'd just taken the time to explain to Grandma why an idea was bad, they could have had a rational discussion about it, and she would've been much happier.

If my uncle had generally made good decisions, my grandmother would not have found his reticence so irritating. Given that my uncle was an idiot, Avó found it frustrating to deal with him.

I love this post. It's a great reminder to pay attention to and make use of the free sources of knowledge around us.