Future of the Supreme Court

Those disappointed in recent Supreme Court decisions will, I hope, refrain from simply accepting defeat. Issues like corporate personhood and religious privileges for family businesses are not settled for all time. In the Hobby Lobby case, for example, anti-abortion and anti-contraception groups will be trying to maximize the family-owned business exception from the Affordable Healthcare Act's coverage mandate. Defining the limits of this exception will inevitably result in future court cases that will gradually percolate to the level of the High Court, giving the Supremes an opportunity to revisit the issue.

Since the justices are normally loath to overturn their previous decisions, especially recent ones, opponents of Citizens United and Hobby Lobby need to be patient, even while striving to correct the injustices. Also, we need some time to elapse so that the best of all possible reversal opportunities can arise: new justices. The following chart displays the current ages and the years of service of the nine justices. Scalia and Kennedy are the longest-service justices, while Ginsburg is the oldest. 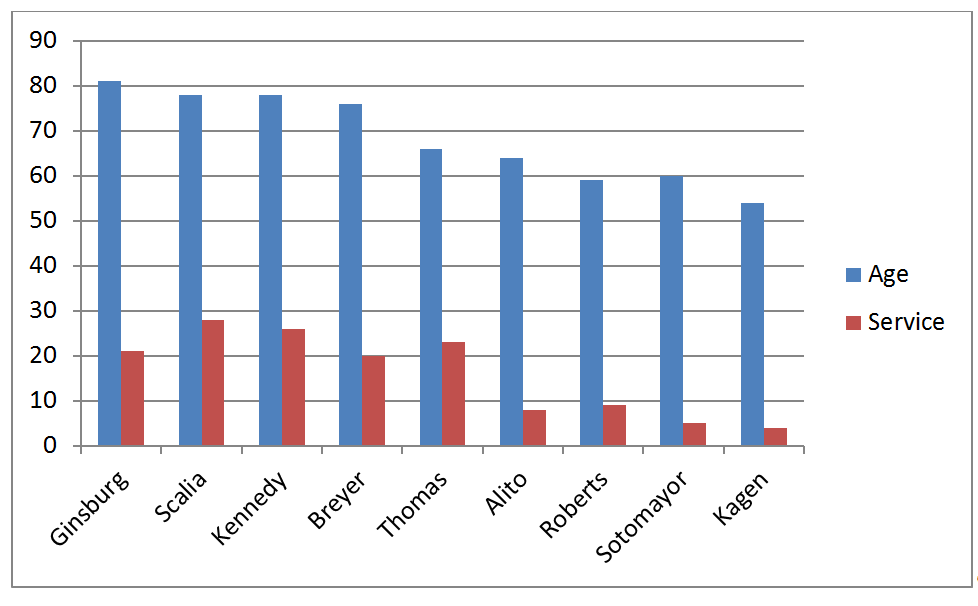 Nothing in this chart, however, is as important as how much longer the individual justices are likely to serve. To that end, let's turn to Table 7 (Life expectancy at selected ages, by race, Hispanic origin, race for non-Hispanic population, and sex: United States, 2010) in the CDC's Volume 61, Number 4, of National Vital Statistics Reports. Looking up the life expectancy for each justice and interpolating between tabular values when necessary, I created the following chart. 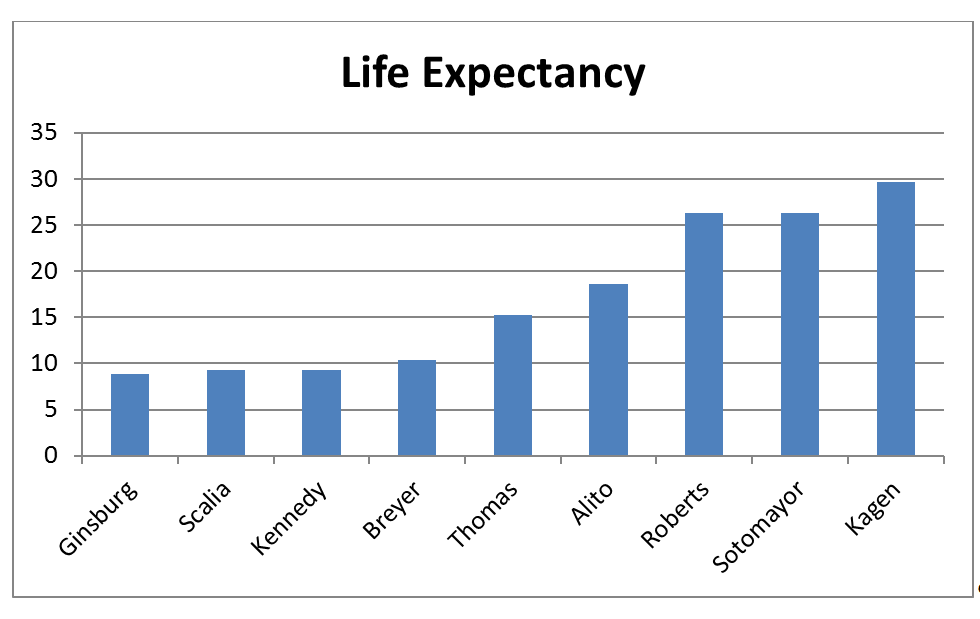 As you can see, Ginsburg, Scalia, and Kennedy are estimated to have about nine years left. Of course, this is not a hard number, but it suggests that even if they decline to retire to spend more time with their families—as the traditional explanation goes—we can reasonably expect a number of vacancies in the vicinity of 2023. Thus the president elected in 2020 would have some openings to fill. It's entirely possible that the president elected in 2016 would have no opportunities to nominate a Supreme Court justice, just as Jimmy Carter did not in his single term, nor Bill Clinton in his second term and George W. Bush in his first.

Patience, right? In other words, Hillary Clinton would need a second term to make it really likely that she could select successors to Ginsburg, Scalia, Kennedy, and perhaps Breyer.

What is missing from this scenario? The obvious, of course. A Democratic president elected in 2016 would encourage Ginsburg and Breyer to step down with the assurance that their seats would not go to nominees dedicated to overturning their judicial records. Scalia, by contrast, would hunker down and strive to outlast the Democratic administration (assuming he can continue to withstand the toxic overproduction of his bile gland).

The case of Sotomayor is special, and I made no attempt to take into account her diabetes, which argues against her supposed expectation of lasting till 2040. I also have no idea whether Roberts, who came to the Chief Justice's position at an unusually young age, will strive to set a new record at the top of the court's hierarchy. That would require that he serve more than the 34 years and 5 months achieved by John Jay. Whatever occurs, it seems unlikely that the string of Republican-appointed Chief Justices will end anytime soon. Harry S. Truman was the last Democratic president who enjoyed the privilege of appointing the Chief Justice when he nominated Fred Vinson in 1946.

Patience. Probably quite a lot of it.
Posted by Zeno at 10:30 AM

Well, Zeno, besides Fred Vinson, what about Earl Warren? He turned out to look pretty darn liberal, with a court that made history on more than a few cases. And... oh, wait, he was a Republican and was appointed to the Sup. Court by Dwight Eisenhower in 1953. What was up with Republicans back then?

But Eisenhower rued his appointment of Earl Warren to The Supreme Court and regarded it as a mistake. There is, of course, some irony that the last truly liberal Chief Justice was a Republican nominee. (LBJ tried to appoint Abe Fortas as Chief Justice in 1968, but the Republicans broke precedence by threatening a filibuster.)

Also, Hillary Clinton will be 69 if and when she takes office. Two terms means making it to 77--not impossible, but pushing it.

Hillary is a 66-year-old white female. Using the same life expectancy table that I used on the Supremes, Hillary can reasonably expect 20 more years. Could be more, could be less, but she's definitely in the zone. We may also assume that she would choose a running mate who is not him- or herself an octogenarian.

Well sure, Eisenhower was a "Republican", but that's hardly the same thing as it is has been over the last few decades. I only wish we could get another president as liberal as Nixon, let alone Ike "beware the military-industrial complex" Eisenhower.

Remember Earl Warren was appointed based upon Nixon's ( VP at the time) desire to clear the California field for himself.
After Nixon broke the Californis delagation solid support for Warren as a Dark Horse candinate in the 52 convention giving the nomination to Ike he didn't want to have to face him after Ike's 2 terms.