I gave my algebra students a pretty little problem involving the graphs of functions and their inverses. The prompt was fairly simple:


The graph of y = f(x) is shown in the figure. Use the graph to find the following function values and then sketch the graph of the inverse function y = f −1(x) on the same coordinate grid. 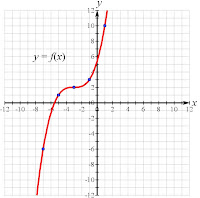 After reading the initial two function values, I expected my students to discover the method in my madness, noting that I'm asking them to figure out the value of the inverse function for the input values 2 and 10, which were the initial output. Since the inverse function, by definition, maps in the direction opposite that of the original function, it immediately follows that f −1(2) = −3 and f −1(10) = 1. What could be simpler?

Apparently, lots of things. Some of my students were quite irked:

“You didn't give us the function.”

“On the contrary. I certainly did. Its graph is right there before you.”

“No, I mean, you didn't give us the formula. We can't figure out the inverse function without the formula.”

“Leave that for a moment. Can you do the first part of the problem? Can you find the value of the original function at x = −3 and x = 1?”

“No, I already told you: You didn't give us a formula to plug into.”

“I recommend you try looking at the graph a little longer.” 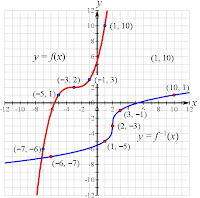 In a few variations on the above theme, the querulous student suddenly lit up and rushed back to his or her desk to fill in the answers. In other cases, the student instead sat down, head shaking, and appeared to be muttering sotto voce imprecations at the instructor's expense.

Later, of course, when the exams were returned, I demonstrated what I had expected them to do. Since most of them had memorized the procedure for computing an inverse function—switch x and y in the formula y = f(x) and solve for y—they should have realized that the presence of the point (1, 10) on the graph of the original function implies the presence of (10, 1) on the graph of the inverse. Previously perplexed students rolled their eyes: “Oh, is that all? Why didn't you say so?”

Did you take a course on creative writing, or rather, creative examining? Surely you're surprising a lot of people with this year's problems. First, you threw them a curve, and now you ask for an inverse function without the formula.
I suppose it is the price to pay if you want a famous novel writer to teach you some math...

If I'm not mistaken, aren't inverse functions of the form y=f(x) mirror simply images reflecting across the y=x axis of their respective originals? Exceptions? Of I have forgotten more than I ever knew?

I'm gonna steal this for my next homework assignment. (I've actually focused of the image rather than the algebra, so hopefully it won't be as bad for them.)

Yes, Kathie, I understood you. A mirror reflection is exactly right, as long as y = x is your mirror.

Thanks, Zee. Maybe I haven't entirely lost my mind after all -- at least not yet ;-)