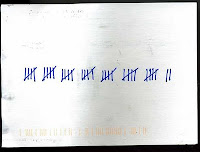 It happens this week

My hit-rate on Halfway There has gradually drifted up from last year's fairly steady 200 per day to this year's approximately 300. I'm not certain why the numbers creep upward, but it's fun to see that they do. It intrigues me to think that each day I have readers from around the world. They come from such places as Canberra, Singapore, Cork, Seville, Sydney, Wellington, Stockholm, London, and Fresno, to cite just a few of the exotic locations listed on Sitemeter's roster of recent visitors.

And now I'm approaching 500,000 in total visits to my blog since it was launched in 2005. (If only I had a nickel for each visit!) Given the rate of visits, the milestone will be achieved in the next day or two.

Half a million visits in six years? How long will it take to hit one million?

What a let-down! I was looking at the Sitemeter report on visit 499,998 (which was someone from Auckland) and anticipating the arrival of the half-millionth visitor when a sudden surge of hits caused me to miss the tick of the counter to 500,000. It hit 500,002 before I could blink. Damn!

A real person finally showed up as visitor 500,003. Hello there, Lubbock, Texas! What kept you? 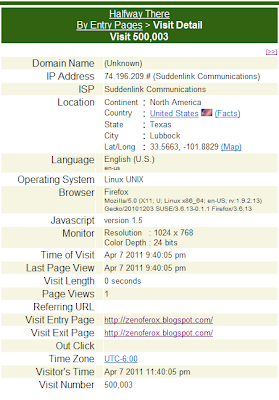 Hey, I'm one of your Sydney hits! And congratulations.

Also, I rarely enter your website, only view it through google reader. does that count?

You can add exotic Stockton, Ca to the list too. Good blogging is hard to come by, so job well done.

Old Chinese proverb. Write an interesting blog and they will come,

Half a million visits in six years? How long will it take to hit one million?

Do we have to show our work? I read your blog to hear about your quizzes, not to actually take one.

Seriously, though, congratulations on your growing popularity

As long as you're asking, you might as well ask big. Ten bucks for each visit would go over well.

Keep up the good work! Hopefully by the time your book comes out I'll have some sort of ereader thing, looking forward to reading it.

I realize I live nowhere exciting, but what about our amigo in Valencia?

Kathie, I'm sure that our amigo in Valencia will chime in at some point and demonstrate anew the global reach of my fabulous blog.

And maybe I shouldn't let Fresno stand by itself in representing all of the visitors from the United States. I could include Stockon! Or even Pittsburgh. (Is Pittsburgh the Fresno of the East?)

Thanks to everybody for the good wishes. I'm certain the Sitemeter tally will click past 500,000 within the next 24 hours.

Visitors continue to pour in from around the globe:

Say, have you ever noticed that "blog" is just "globe" spelled sort of backward? Yeah. Scary! (Don't worry about the "e". It's silent.)

Pittsburgh has been designated multiple times as, ahem, America's Most Livable City -- an appellation unlikely to attach to Fresno or even Clovis, let alone [fill in the blank]!

Fresno has an unfair disadvantage in the competition to be considered America's Most Livable City. Several of my family members live there. ;-)

Hey Boss, don't forget to send some of that imaginary money my way, for all the times I've checked out your blog under pseudonyms from exotic locales. You do understand that I actually have to *travel* to those places in order for them to show up on Sitemeter? Let me know when you want to hit that magical one million! It's the least I can do for your birthday.

Some of us cheat! I bet you see me as American, but I am actually from Denmark! I have to do a couple of browser hacks in order to get access to Comedy Central's TV shows!

Congratulations on the success!

Cheaters (especially from Denmark) are welcome on my blog.

(Just not in my classes!)

Zeno, my favorite second cousin lives in Fresno, but as lovely a person as she is, that still doesn't redeem the town. Neither can friends in Tulare and Bakersfield redeem those jurisdictions either.

Hey, you left Canada out! And I even have a cat named Zeno (he always runs to get where he's going, probably because he is worried that otherwise he might never get there).

Zeno, I suspect I register from Vallejo, CA (since my nephew, er, ISP provider, is located there); but you are read in Silicon Valley.

@Kathie and what, pray tell, is wrong with New Orleans? While I was getting punted unceremoniously from one university to another, that was by far the best place I lived.

Who said anything about New Orleans?

Greetings from the Whine Country: Slow-noma County, CA. Santa Rosa calls itself "the City Designed For Living," but I pronounce it "leaving." Still, it's not Fresno. Thanks for being readable.

I have been a follower of your blog since I first discovered it some years ago. I live in Redhill UK (probably show as London on your stats). I am surprised that a blog of this quality has such few hits.

My mistake. My eyes must be going already; reading "TulaRe as TulaNe". One too many hurricanes, I guess...

I get more hits than you do, but you get a much better grade of commenter (current comment excepted). You should take some satisfaction in that, I think. I'll wager your influence is much deeper and more broad than mine.

Congrats. I'll see if I can't make it a point to send readers your way. Good writers should have a larger audience.

Smart writers should, too. Two counts in your favor.

Thanks for your kind comments, Ed. (Extremely kind.)

Valencia chiming in demonstrating anew the global reach of your fabulous blog!!!! Actually this post caught me in Lisbon hence the delay in the answer and a total new level of fabulousness.

Zeno, you know I'm a big fan of your writing and I hope you never get tired of it. That way we'll keep on enjoying your posts about your family, your students, politics, creationism, and whatever you want.

Apart from congratulating you on the absolute success of 500,000 hits FROM AROUND THE GLOBE (Fresno included) I totally agree with Ed. You have a regular set of readers that participate and comment which I'm sure makes you feel rewarded. Having a lot of hits is nice (of course) but having readers that are so interested in what you write that actually take the time to comment about it is even better. I’m sorry Ed but Z wins!